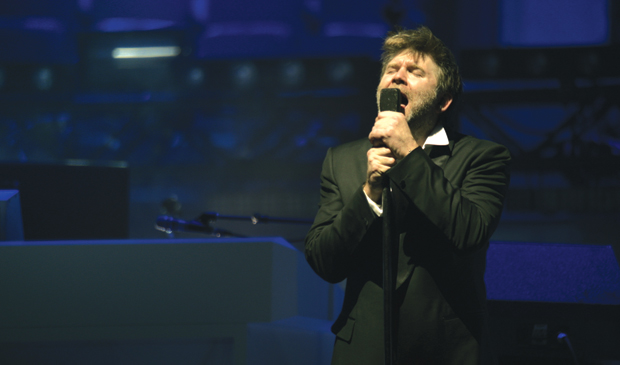 Claiming rock star retirement before he actually became one, James Murphy worked his way up through 1990s artefacts punk, alternative and indie before finding his voice and audience as the mastermind of dancerock pioneers LCD Soundsystem.

“Losing My Edge”, his lament for fading youth, became (along with his DFA production work for The Rapture) an unlikely genre progenitor, and he replaced Rudy Giuliani as a Big Apple figurehead with “New York, I Love You, But You’re Bringing Me Down”. Now Murphy’s pulled the bringdown on LCD, and there’s a new documentary, Shut Up and Play the Hits, covering the band’s final gig at Madison Square Garden and testifying to the carnage.

It opens in Berlin on December 6. Find cinemas and showtimes here.

I’ve been out of New York since before the storm. Apparently my apartment is not destroyed. I was really close to the evacuation zone but, apparently, I’m fine.

But your band is gone.

When did you feel that LCD Soundsystem had solidified from a gas into an object?

Man, I guess around (2007’s) Sound of Silver (DFA/Capitol). I feel as soon as the album came out it started to change. It was hard to sense until we were on real tours, we were put out through EMI and stuff.

Your ambition was starting to work against you.

Not against me – I just feel like, the goal for me was never to be in a big band. It would occur to me over and over, whenever I would get really, really worried and stressed out, I was like, “Ah well, okay, this isn’t what it’s supposed to be, it’s supposed to be fun.” I did not set up the band to create fewer opportunities. I stopped being able to produce DFA records. I haven’t done remixes in years. I haven’t produced any outside LPs. I haven’t been able to have an idea and follow through, you know?

“Losing My Edge” explicates a lot of your influences and anxieties, but you also exhibit the anxiety of influence in your songwriting, adapting and transforming works you admire, say, lifting the piano riff from “White Light/White Heat” for “Drunk Girls” or going all Eno-esque in “Great Release”.

I wasn’t thinking about “White Light/White Heat” at all. After I got pretty deep in the song, I was, like “Huh, that sounds like “White Light/White Heat”. For “Drunk Girls”, I was thinking more about “Boys Keep Swinging” by Bowie. I dunno: LCD’s always kind of been a band about bands. You know, making songs about music. There were always little references, little or big references, whether it’s in “Losing My Edge”, the little Killing Joke turn-around drums part. When I was younger, I wanted to hide that stuff but when I got older I felt like it was part of the dialogue.

Do you feel you have  exhausted the past?

I’ll just rediscover a record that I’ve listened to since I was 13, and everything about it will become more important. There’s this OMD song called “2nd Thought”. It’s a song I’ve heard a million times, but only a couple years ago I listened to it and I was just really struck by how it’s constructed and how beautiful it is and all the weird things they’re doing with delay-timing, and then how it’s very obvious it was recorded with a little handheld microphone. The song kinda opened up and changed – the song didn’t change, it just changed for me.

To what extent do you feel that the film changed you, getting into the cracks where you weren’t entirely in control of your self-image?

Huh! I dunno, I feel that when you’re in a band you have a lot of say in how you’re seen – I never thought about it until now – by the virtue of, like, you make your own music, you decide to make a video or not, you decide to do a photo shoot or not; it’s not like being a politician where you have to deal with whatever’s coming along. It’s a unique thing. In making the film there were things I didn’t like seeing. I dunno, I’d get pretty drunk and ramble a lot – stuff like that bugs me, but I thought it was funny. It’s fine. I don’t feel like I have a hyper- controlled self-image obsession or anything.

How long did it take between your deciding to end the band and the final concert and the film being made?

Months and months and months. I kinda decided earlier but I wasn’t sure. We would have broken up the band at the end of the tour for (2010’s) This is Happening (DFA/Virgin). It started looking less and less enticing to do another round of summer festivals. And the MSG show was there, and they were giving us a hard time, and they were looking to get some huge second band and I was getting pretty annoyed and I just thought, “Well, fuck it and that’ll be our last show.”

So when you were recording  This is Happening you weren’t thinking, “This soon won’t be happening”?

I always think that. When I made Sound of Silver I was thinking, “This is going to be the end of LCD Soundsystem.”

How did the rest of the band feel about it?

They were fine. You gotta remember, we’re not some band that got together when we were teenagers and this has been our lives the whole time. Everyone was significantly older when we started. And they were asked to be in a band for a weekend, 10 years ago, and have been kind of dragged through it for a really long time. It’s also always felt like it was college, like you were gonna graduate at some point. It’s something we talked about all the time. These are the people I was gonna talk about this stuff with whether they were in the band or not.

The film is dotted with these Buster Keaton-ish sad looks of yours. Were you telegraphing mixed emotions?

The thing is, these are your friends, they’re great musicians – wouldn’t you normally want to play with these people in the first place?

Well, when I make records I mostly do it myself anyway. Like, LCD records. That’s just traditionally what I’ve done – it’s mostly me by myself in the studio.

But surely that wasn’t the case on the later records?

SHUT UP AND PLAY THE HITS: THE FINAL DAYS OF LCD SOUNDSYSTEM | Directed by Dylan Southern, Will lovelace (USA 2012), with James Murphy, LCD Soundsystem and Friends. Starts December 6