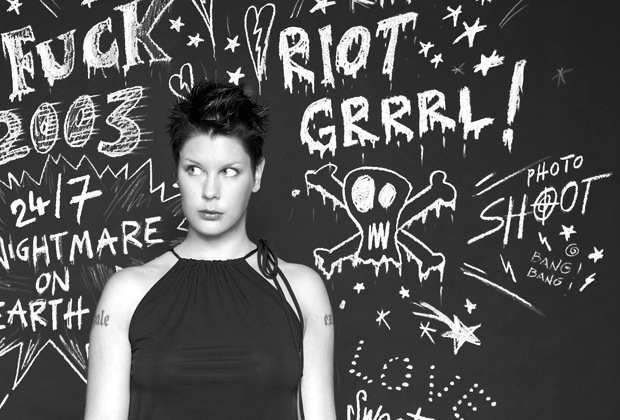 FROM THE ARCHIVES. Miss Kittin hits the DJ decks at Weekend on Apr 16. In an interview from 2004, she talks about her record at the time, I Com, electroclash and and various mid-decade passions.

In the early 1990s, former go go dancer Caroline Herve discovered raves in her native France, driving the backroads with friends, stereos blasting, to isolated dance meccas, in search of UK DJ legends fleeing draconian party laws in pursuit of life, liberty and ecstasy. By 1994 Caroline had spontaneously decided she could and would be a DJ too – Miss Kittin was born. Over the next ten years Miss Kittin ascended through the DJ ranks spinning Techno, Deep House, Electro and whatever she was in the mood for (up to and including playing Michael Jackson’s “Billy Jean”, ad infinitum). In 1996, Kittin swung a second musical career through her first collaboration with Michael ‘The Hacker’ Amato. “Frank Sinatra is Dead” explored darker, more ironic and explicit realms beyond the usual “It’s the summer of love, baby.” The story goes that there shouldn’t be a Miss Kittin section in record stores, but a “featuring Miss Kittin” one. But after collaborations with Felix da Housecat, Golden Boy and Tricky, Kittin decided to go solo. I Com (on Labels) is a showcase for Kittin’s lyrical and vocal skills and diverse influences. Produced primarily by GLOVE, producers of the last Chicks on Speed album, it’s slick, exuberant and flexible – like Kittin herself?

How are you feeling now that the album’s about to be released. It’s been ready for so long.

I feel great. For me the process of making music counts much more than the result. I felt no pressure in the making of this album – I took it simply as a challenge to myself – not as an ego-tripping desire to start a solo career. I still prefer to share the whole thing in my project with The Hacker!

No plans!!! I am a DJ. I could plan a live show, but as an ‘electronic artist’ I have to take a lot of time to organize it and I don’t have the patience. It’s too stressful. I prefer to do what I know the best: to DJ, but include some live elements in it. I can’t do everything!

Of course not. Can you paint me a picture of the making of the album? How was it working with GLOVE?

It was easy. I came with the concept, the ideas, some lyrics, and we put everything on the table, and started to work on a song that inspired us that day! It was like a big brainstorming from my basic elements. I came with the idea of a very various record that would explore many of my influences, but in a pop method (chorus-verses). GLOVE were my voice of reason. I knew them from the little work we did together already, we already made a great team. Without them, I would have gone more extreme, and it would have been a mess.

But I Com could be said to have its dark, angry, and even tragic side – as in the opening lines of ‘Professional Distortion’: “I have to smile/I have to show/I have to be nice all the time/I have to say ‘Hello baby’/ I have to wake up every day.” Hearing that makes me wonder, why you don’t just get out of this business and go somewhere nice with your cats?

Because I am having fun! People have so little imagination, you always have to give them the manual! They take everything first-degree, they don’t even see they also have their own professional distortion, and that we’re all allergic to ourselves. Instead, they prefer to think I am like a rock star: depressed, junkie, and schizo!!! It’s funny.

You seem to feel quite at home in Berlin and have said that you’ve “got closer to the scene and are supporting it.” How?

I just feel it’s totally natural to play in small parties in the town you live in, and play my friends’ music. It’s not a political thing in itself, just a part of my life. People like BPitch Control, Shitkatapult, or clubs I feel at home in.

Now that the OstGut is gone, what’s your favourite place in Berlin to a) DJ and b) perform?

What constitutes a good Miss Kittin performance, in your opinion?

When I want to go to the toilets ten times before playing as I am so nervous, and when I don’t look at my watch while I play! The rest? I can’t explain. Kind of meditation.

What about the Miss Kittin pseudonym? Do you think you’ll outgrow it – or does it still fit like a velvet glove?

I don’t think about that. It’s my public name. I am glad I have it to separate my work from my private life, but it could be any other name. I can change tomorrow.

And the nurses’ uniform? Do you feel any connection to the cabaret-performance elements of electroclash?

The nurse dress was my best fashion investment: €50, wear it a few times, and people still talk about it. Electroclash? I don’t care. I make music, I don’t spend my time brain-masturbating about that. They say I am part of it? No problem. I suppose I am the good part of it, right????