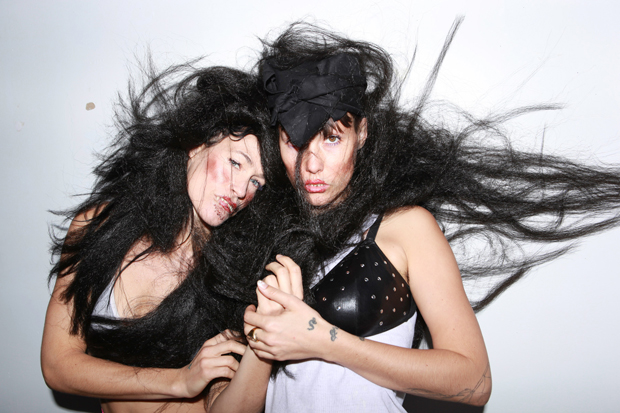 Sierra Casady’s a trained opera singer, but the Paris-dwelling American traded Figaro for freak-folk in 2003 when she reunited with her estranged sister Bianca to form CocoRosie. The musically adventurous duo’s lo-fi debut La Maison de Mon Rêve (Touch & Go) gained them a fervent following that included TV on the Radio’s Dave Sitek, who produced this year’s beat-happy “We Are On Fire/Tearz for Animals” single as a one-off for Touch and Go Records.

On July 7, 8 and 9 Heimathafen Neukölln hosts their familial folk/electro/hip-hop madness.

Do you and Bianca feel pressure to keep up your quirky image?

[Laughs] Oh, that’s funny. Yeah, from our end it may be a little hard to understand, or different than you think, but we’re not trying to be weird at all. I don’t know what mainstream is; I don’t even listen to music. But like, I always try to be normal, you know? I always try to fit in. People say weird, or shocking, or experimental, and I don’t even know what they mean by that.

What’s the division of labor like between the two of you? You have more of a musical background…

I have a huge adventure in singing and experimenting with my body. I studied some classical music when I was younger, and sang in choirs, which was this amazing experience of harmony and vibration, and found myself addicted to that. [Bianca] is a writer, she’s writing all the time. She carries around an old typewriter with her. So that’s pretty awesome; she brings a lot of experience through poetry.

You also worked with Antony [Hegarty] on “Tearz for Animals”. You and Bianca have such a close bond – is it hard bringing other people into that inner sanctum?

I suppose so. What we do is very personal. It’s not so technical, and we don’t prepare a lot of work ahead of time, and I guess it may be hard for some to understand. Maybe that’s why we don’t often work with other people and rarely work with engineers that we aren’t really comfortable and familiar with. But Dave is like a brother to us, and Antony happens to be like a sister to us, you know; these are some of our closest friends. Having Antony over at our place and singing in the afternoon sun and drinking tea was for us a really natural thing.

Was this your first time working with Dave Sitek?

He’s an old friend. We hung out in the bathroom a lot recording stuff off our phones or tape recorders, way back in the day, and then recently we ended up at his place in Los Angeles and just started making magic together. He’s a crazy mad scientist who likes to make horrendous messes and get into a lot of trouble. The songs that we worked on with him were really improvised and spontaneous. No compromising, total freedom.

Do you and Antony ever get into opera-offs?

You were actually in Germany this month for the Donau festival, where you put on your first opera.

Yeah, I loosely called it an opera. It was a string of songs that were related to one another, kind of like a story. We so far have just done two performances that were totally magical and kind of classical but really new age and psychedelic, with acoustic instruments but everybody using their instruments in a dreamy, kind of lucid way. It turned out to be, um, yeah, experimental?

What was the concept?

The unifying aspect there would have been the exploration of past lives. Every song kind of represented another phase of the soul, a separate lifetime. The sound and the music really supported that journey.

I heard a clip that sounded almost like the “baby metal” project Metallic Falcons you did a while back.

That’s a good connection. I had a few flashbacks, actually, working on the opera to the Metallic Falcons. I wanted to bring in some electric sounds. There were a ton of acoustic sounds, and we needed to have an opening to a kind of harsher world.

Your sister had a dance piece in the same festival. Do you guys want to do more theatrical performances in the future? Are albums still part of your master plan?

[Long pause] Um, that’s a good question. We don’t have a master plan, and we’re pretty open, so if something comes our way or sparks our interest, we just follow it like a little stream, a little river. We are working on a new record that we’re really excited about. It’s pretty follow-up-ish to the singles that are coming out right now.

You said you don’t listen to music, but you must have listened to classical when you were studying it, right?

You know, I was never really into music history. It was more a spiritual fascination and physical obsession for me, my study in opera. I haven’t listened to a lot of classical music, either. I’m actually really in love with Maria Callas. Um, but let’s see, no, I’m just not oriented in that way. Maybe it’s an ADD thing, maybe I just can’t focus.

You guys get lumped in with Tegan and Sara a lot, both because you’re sisters and because you’re often pigeonholed as a queer band. As the straight half of CocoRosie, how do you feel about that?

I’m not sure. I don’t know the band you were talking about and I’m not really in the world that much. Let’s see – I identify with the animal kingdom? And I try to find in myself a really good balance between my masculine and feminine energy. I wouldn’t say I’m straight.

You’ve been living in Paris for over 10 years – how does being an expat influence your music?

There’s been some perspective gained by taking some space from the United States. I like feeling like a stranger. I feel this incredible warm sense of privacy.

And perhaps laxer expectations – you’ve been slagged in the U.S. for using the N-word in “Jesus Loves Me” and appropriating hip-hop imagery. Are racial attitudes different in Europe?

[Long pause] I mean, the kids are more advanced in art and more into creative thinking. I think creatively they have left room for the hidden messages or are able to read further between the lines, you know?

Your music’s incorporated more hip-hop over the years.

Our first record, which I guess is renowned for its softness and folky qualities, we thought it was kind of a hardcore hip-hop record. But that was from the inside, and I guess we just didn’t understand exactly how it would be received. We do like hip hop, and some of the hip hoppers we work with live are just too much fun, and we just can’t resist.

You had to cancel a few shows earlier this year for medical reasons – are you doing OK now?

I lost my voice, and I couldn’t get it to come back for two months. The doctors didn’t know why… it’s something they said they had seen with singers. I tried everything possible – as you can imagine, I was totally devastated. I tried natural and some unnatural medicine and changed my life around completely and worked on all my relationships, did everything that might help change things in my body too. And I don’t know if that was it, but eventually my voice came back.

What would you have done if it didn’t?

Um, I would probably focus on sports. [laughs] Snowboarding maybe?