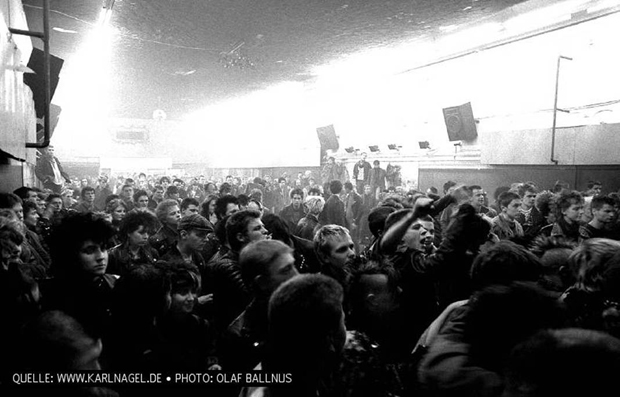 Just in time for SO36’s 36th anniversary, a brand-new book illuminates the history, present and future of the iconic Kreuzberg club – but it can’t be published without your help!

It’s SO36’s 36-year anniversary party: punks, drag queens, queers, Turks, Arabs, suits, boots, the old and the young, all under dark lights and competing with music in expletive-laced chatter – exactly the kind of chaotic intermingling that has kept the legendary Berlin punk club alive for so many years.

The spirit of the party rages on and soon, all 36 years of Kreuzberg’s cultural hub can be perused without the din of punk, techno or Oriental music drowning it out. SO36: Das Buch is near the end of its production after nearly two in years in the planning. The bilingual German/English tome promises to document the spiky history of Berlin’s favourite punk club through personal texts, stories, unpublished photos, interviews and even a complete gigography of the shows, from more homegrown flavours like Die Tödliche Doris, Malaria! and Einstürzende Neubauten to early international imports like the Dead Kennedys and Black Flag through today, where sparse appearances of German giants like Beatsteaks still occur. And if that’s not enough, it will be accompanied by a DVD full of unseen interviews, photos and film material.

The 240-page punk rock magnum opus is set to hit your local book slinger (and online shops as well) in early 2015 and to finance it, the no-hierarchy team at SO are leading a special crowd-funding project. For a mere €25 (€30 with postage) you can prepurchase the book, ensure not only that you’ll be the first on your block to have it, but that it will make it to print in the first place. But you have to hurry, the crowd-funding rush ends on October 7.

Most luminaries from Berlin’s dissident district have a connection to the giant hall on Oranienstraße, so expect a lot of loud left-wing rabble-rousers. But beyond punk, SO36 has had support from and supported the queer community, the Turkish community and Kiez culture in general, hosting things like Kiez Bingo and a night Flohmarkt, where the happily unwashed masses can hock their unwashed wares. Crossover success comes most notably in the form of Gayhane, the gay/queer club for oriental music headed by the indefatigable DJ Ipek which, at one point, enlisted the help of Verrücktes Blut director Nurkan Erpulat during his wild youth. Their shouts also make up a big part of the noisy book.

Beyond the book, what does SO36 have in store for the future? Former singer of Die Tödliche Doris and author of Subkultur Westberlin 1979-1989, Wolfgang Müller, consults his oracle and lets you know within those very pages.

UPDATE: The crowdfunding deadline has been extended for one month (through November 7) – you have one month prepurchase the book and support the cause.

To prepurchase the book and contribute to the crowdfunding effort, click the link here.