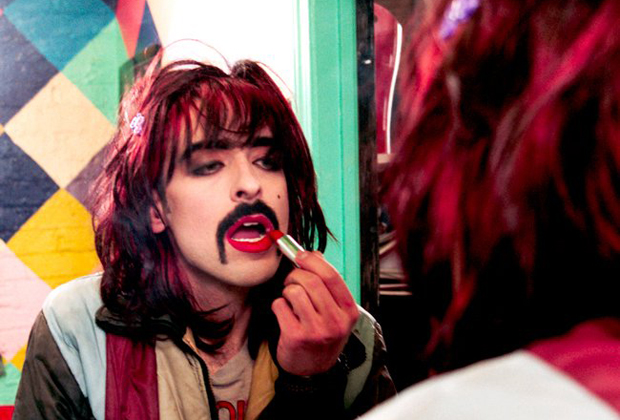 The punk rocker turned disco debutante SSION (aka Cody Critcheloe aka rhymes with “fun”) has been bubbling under for almost a decade-and-a-half, making album art for Yeah Yeah Yeahs, videos for Santigold and others, and remixing the likes of CSS while building a more-than-cult following in the queer underground with flamboyant shows replete with video, costume and his trademark hirsute upper lip. Ssee for yoursself at Festsaal Kreuzberg on Thursday, June 20.

What can we expect with the new show?

Well, I’m singing “Happy Birthday.” It’s actually going to be way, way more rock ‘n’ roll than I think anyone’s even expecting. I mean, as a performer, I’m like punk and part of the set is really, like, heavy, so I’m excited about that. And really noisy, so it should be cool. God, that’s, like, a terrible anecdote: “It’s going to be way more rock ‘n’ roll” [laughs] God. What else? Throw in – you can lie – throw in anything interesting, I don’t care [laughs].

I mean, how old is [Bieber], like 17 now or something?  Just imagine if we had been quoted at that age? The horrible shit – I mean, I would have said way worse stuff than that.

When it started, we were straight up, just like a punk rock band. And then I, like, went to art school and got really into doing video and started incorporating that into the show. It was really theatrical and over the top, but I was, like, looking at stuff like GG Allin and Lisa Suckdog, and I just thought of this in that punk rock kind of way, but it was other people who sort of labelled it performance art. So it seemed to make more sense to have all the visual accompaniments with a pop show. I loved pop music always but, you know, even now it’s weird because it’s like I get so – you know, right now there’s so much pop music that I’m bored with and whatnot.

It all sort of sounds similar, which is inevitable. I mean, most production on the radio sounds the same to me, but if it’s a good song, it’s a good song. I saw Ke$ha and Pitbull – it was interesting to see that show, you know? Especially Pitbull, ’cause it’s, like – I didn’t really know too much about him but he doesn’t really sing and he’s just like sorta saying “Yeah! Let’s go!” and then there’s, like, giant projections of just those words on the screen and he’s being like a machismo sort of dude, surrounded by four stripper chicks, and then Ke$ha’s, like, sort of claiming, like, a weird other thing with a bunch of gay dancers around her. I mean, they’re both sort of messes. It’s just pulling everything there is and making one giant mess out of it, I guess.

Do you think it’s authentic?

It’s hard to say. I mean, maybe Pitbull’s being authentic to himself, who knows? There is something about Ke$ha that strikes me as authentic, even though it’s, like, a little bit grating and annoying and I thought the show was a mess. It did sort of seem like maybe this is like what goes on in her head. But the whole time I was watching the show I was just like, “God, I wonder what it would’ve been like to have seen Nirvana play in this size of an arena without video projections and a light show and it’s, like, three guys on stage playing actual instruments and it’s a band.”

I love that he has monkeys. Did you see him on Saturday Night Live? I saw that, and it freaked me the fuck out. That kid – I can’t imagine being his age and being surrounded by adults who just pander to your every move. And he is so – like, just the way he, like, looks at the camera, works the camera: the psychology of him is just insane. Like, he already has monkeys. That’s like a sure-tell sign that something is bound to go haywire.

What did you think about his Anne Frank Museum statement?

Oh yes, that she would have been a fan of Justin Bieber. Well, that’s a good quote, I gotta give him that. I mean, I wish I would’ve said that [laughs]. I mean, how old is he, like 17 now or something? [Ed. Note: He’s 19.] Just imagine if we had been quoted at that age? The horrible shit – I mean, I would have said way worse stuff than that. Maybe he’ll be able to transition well, you know. I mean, the cool thing about it is – this sounds sort of cheesy – but I feel like if your essence is a songwriter or you are, like, somehow a creator at all, you’re much more likely be okay, in a way. Because if it is strictly about an image and strictly about how you look, it seems way more likely you’ll go insane. At the end of the day, at least he can like play guitar and write a song.

I feel like, in a way, she doesn’t have that. Like that ability to – well as far as we know, who knows, you know? [laughs]

Britney and her secret punk band.

I know. I thought that was gonna happen when she shaved her head. I heard a rumour that Kathleen Hanna sent Britney a care package with, like, beans and stuff. Wouldn’t that be amazing?

Britney is a sort of vector for transitioning queer culture to the mainstream.

I felt way more of a distinction and way more interested in making that distinction five or six years ago when I was in Kansas City. Being queer felt like much more of a statement or something. Like, it felt really, really important to me to make that distinction and do something really, like, gay. And now, it’s like less of something I conceptualise. In an interview someone was like saying how queer culture was this huge thing and now it’s more about freak culture and it’s, like, well, yeah, I would agree with that.