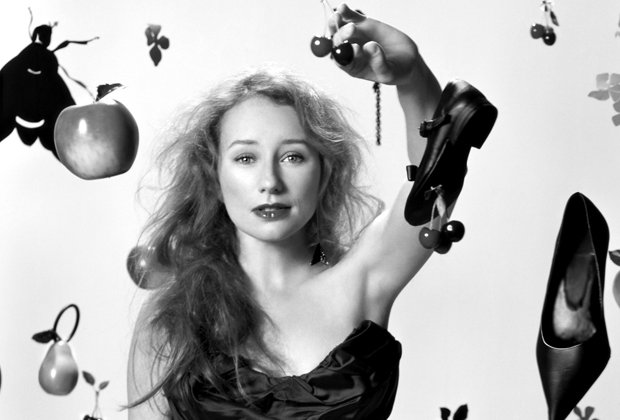 Child prodigy Ellen Amos was expelled from Baltimore Peadbody Insitute conservatory at age eleven for playing John Lennon songs by ear. Three decades later, “Tori” Amos, now 41(2005), is one of the most well-known “intelligent” female singer-songwriters – along with Björk and PJ Harvey – that rose to fame in the 1990s.

EXBERLINER talked to her while she was in Berlin to promote her album The Beekeeper. We asked her about motherhood, politics in music and the love triangle between her, her Bosendorfer piano and her Hammond organ.

The scarlet songstress returns to Berlin with a new album of classical compositions, Night of Hunters, performing them at Tempodrom on Oct 11.

How would you describe your relationship to your Bosendorfer piano?

She is a friend…

Your piano is a SHE?!

My piano is, without question, a she. I guess it has changed over the years. There were times when it was a little more volatile, but because I’ve toured so much with her, I got a sense of experiences and stories shared. It doesn’t feel inanimate – without her I couldn’t create music.

Though there are other pianos out there if something ever was to happen to this one then I would mourn her. But I wouldn’t stop playing the piano.

Don’t you think you betrayed your oldest friend by introducing a Hammond B-3 organ on your new album?

I think that I turned her on. Because the Hammond organ is male, very male. Sometimes I would sit in between the two of them and would feel like I was intruding!

From your first album, 1988’s Y Kant Tori  Read to The Beekeeper your musical style has evolved from a pop-metal approach to a lyrical one…

You have to become an extension of your instrument. You have to be able as a musician to change – like key changes. I started out playing very young – I was two-and-a-half – so music has always been my first language. This is how I understand the world around me and how I function, really.

I have a certain taste, but as a musician you serve the music’s essence. It’s not just about having to do this style for the next 60 years of your life, already at six going, ‘Oh my god, what have I agreed to?’

What inspired your new album? Is the title a reference to Sylvia Plath’s The Beekeeper’s Daughter?

That’s one seed of many. I also wanted to bring in the biblical symbolism. Religious texts have been used a lot in the recent elections and in arguments in favor of the war. They were used on all sides to make young men and women believe that they were confronted with a religious war. I wanted to make a different use of them.

Do you think art or artists should get involved in the realm of politics?

Some day we all get confronted with things that are hard to put into words, but art somehow makes sense of them. Not all of us like confrontations. I don’t like them, but you can’t run from them forever and you don’t have to always fight with guns and knives and fists. You have to think about how you are trying to inspire people.

Would you call your music autobiographical?

I don’t separate music from life. I’m always composing. I’m always observing while traveling. Once I’ve built up a collection of ideas, I get back to the piano and transform those ideas into some sort of a sonic palette, a sonic structure.

I have a family life, but I don’t lock music out when I’m alone with my daughter. She communicates to me a lot by singing, she’ll just sing how she feels and I’ll sing back to her. Mark, my husband, was playing drums and guitar when he was four, so music is very much part of our lives.

So is that so easy? Is being a mother such a positive, helpful thing in the life of a star singer?

I get frustrated sometimes because I’m out of my depth in terms of dealing with this thinking, talking creature who’s four years old. She should be a mini-me, but she’s not, she’s just not mini-me she’s her own person.

But Ribbons Undone was obviously inspired by your daughter. Did having a child change your music?

It’s hard to put my finger on it. I think that there is a playfulness that has emerged since I became a mom. I love being a woman and I must say I’ve never loved being a woman as much as I do now. I’m 41, and I’m loving it.

No more demons to kick?

The demons can come and visit me. I’m open for business. But no more children. I can’t.

You once said that madness fascinates you because we are all so close to the line sometimes. Have you ever felt close to that line?

Yeah… I think hormonal change for women can bring you pretty close to that line. You feel like it’s completely out of your control. I also have a friend who has bipolar anxiety disorder and psychotic tendencies, and to walk that walk with her has been extremely humbling – seeing when your brain computer seems to not respond the way it should. How you can watch your friend unravel right before your eyes.

You have to walk the dark road with them and sometimes that means letting them go through it and there is nothing you can do except sit there and hold a space.

It’s sort of a backstage pass in the process. It’s not an all-access areas pass. A lot of women from my generation were born feminists. I was born a feminist, but sometimes the tactic just doesn’t work. Sometimes it can just make people want to slam the door in your face.

Many women calling themselves feminists cruelly judge other women and degrade them because of their choices to be mothers or to even get married. That’s no different than the patriarchy degrading women who want to be economists, and that’s not effective.

Jesus might have called himself Christian at one time, but I don’t know if he would call himself that today. A lot of people involved in Christianity do not have Christian consciousness. And a lot of women who are part of the feminist movement have lost their compassion.

In the single “The Beekeeper” there’s a line that quotes Burt Bacharach’s “Message to Michael“. Is that a reference to your recently deceased brother, Michael?

He was always a great support. He always encouraged me to try and be brave and not be afraid of not being part of a trend. He would say to me that trends come and go, that’s not why you chose to be a musician.

And you can’t be envious if somebody else is tapping into the masses and you’re not, as long as you are making good work.

He was one of those people who didn’t care about encouraging you to make it more simple for the masses to eat. Some people make fast-food music and they do it well. I’m not doing it.