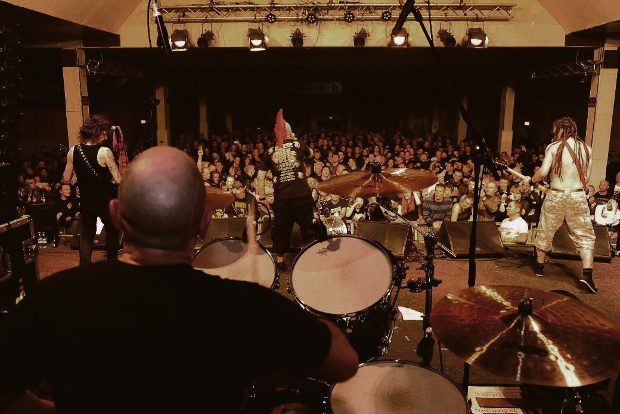 Just a few weeks before Berlin’s abundance of open-air shenanigans lures the vampiric winter club crowd towards sunnier pastures, showery April is packed with indoor festivals of all genres.

The month starts with a rather mixed affair, Denovali Festival‘s fourth edition at Heimathafen Neukölln. From April 1–2, Denovali Records showcases label acts from the pop side of the spectrum, such as Esben and the Witch, to the obscurer industrial palette of Demdike Stare and sombre ambient acts like Grouper and Subheim.

Yet another label presents its talents on stage with Uncle M Fest 2016. The Westphalian imprint travels east to bring labelmates from UK pop-punkers Muncie Girls to indie rockers Foxing and ska punks The Bennies, amongst others, to Cassiopeia on April 22.

Meanwhile, if you couldn’t get enough of punk after the Too Drunk to Watch film fest, Punk & Disorderly (photo), Europe’s biggest indoor punk festival, takes over Astra Kulturhaus from April 15–17 with such acts as The Last Resort, Discipline, Angelic Upstarts and The Partisans.

A couple weeks later (Apr 28-30) that same venue fills with all variations of rock and metal (and no small amount of pot smoke) for Desertfest.

Not foreboding enough for you? The fifth edition of Hamburg’s Droneberg festival takes over SO36 for a long night of doom metal on April 16. Already announced: Celeste, Year of no Light, Monarch! and more.

If you’re a true hard goth kinda type, the Sincity Festival at Frannz Club (Apr 29-30) is your cup of tea – or blood for that matter. Catering to your dancing needs will be Ben Bloodygrave, Forced to Mode and other dark souls.

Finally, if you need additional sensory stimulation with your music, the Volksbühne invites you to Decession (Apr 30), an evening of electronica and performance art with a smashing selection of Berlin’s finest up-and-coming producers. Beats by Amnesia Scanner, M.E.S.H., Physical Therapy, Why Be and more complement 3D videos, lasers, sperm-scented perfume, 30-year-old Japanese tea and other bizarre-sounding delights. So, take your pick and simultaneously bid farewell to the indoor side of Berlin nightlife for at least five months.