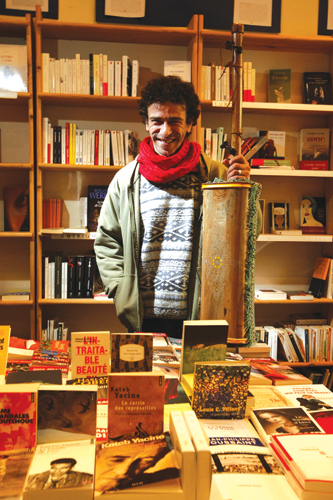 Frontman for the Grenoble-based Gnawa Diffusion, Algerian-born singer Amazigh Kateb has long been fusing elements of reggae, rap and rock with traditional North African instruments. The son of the influential writer Kateb Yacine, Kateb pens lyrics that are a mash-up of languages, politics and poetry as intimate as they are provoking, which you can hear for yourself during the Wassermusik festival at Haus der Kulturen der Welt on Sunday, July 22.

You incorporate French, English and Arabic into your music, at times singing in one language and at others shifting between the three.

These are the languages I learned so they’re the ones I use. If I had learned other languages, maybe I would sing in them too. It’s really a practical utilisation of the tools that I have. There’s not much of a relationship between creation and language in itself; language is the material for creation. I think it’s good to diversify languages, musical styles, and to collaborate with other genres. We’re at a time where we can easily forget about boundaries.

Do you think your audience perceives the use of different languages as political?

Of course. Anything can be political. I don’t know how it is nowadays in Germany, but in France if you say, “I like Yiddish music,” it means that you’re pro-Israel, or if you say “Maghreb music”, it means you’re for the Arabs, or if you say “Iraqi music” you’re for Iraq. More and more you find that people understand other things than what they hear. I don’t understand why you listen to music for politics – music is first and foremost for your ears.

But don’t you think music will have a role in what’s going on now politically in North Africa?

I think it has a role to play. Alone it can’t do much. I think that North Africans have woken up – the revolutions are a long way from being over and, in some cases, a long way away from starting. The central element is the revolutionary culture: music, literature, theatre, all the arts, all these cultural aspects. And the media as well – all forms of media are very, very important. You need a lot of music, a lot of poetry, a lot of fighting, a lot of patience, a lot of anger, a lot of love, and other things. Music is just a part of it, not the central element.

How did your father influence you as an artist?

I think he gave me the key elements: poetry, the verb, text, music, theatre – the things that he experienced. He also communicated the passion for revolution and the love of revolution to me, which is something that is very important for a musical artist. As an artist, you’re always forced to revolutionise your heart and your spirit in order to move forward. When you create, you are in the process of having an internal revolution. Sometimes you have to question yourself, to cut yourself off from some things, even from yourself, in order to know which direction to go in.

So, in the end, you are a political artist.