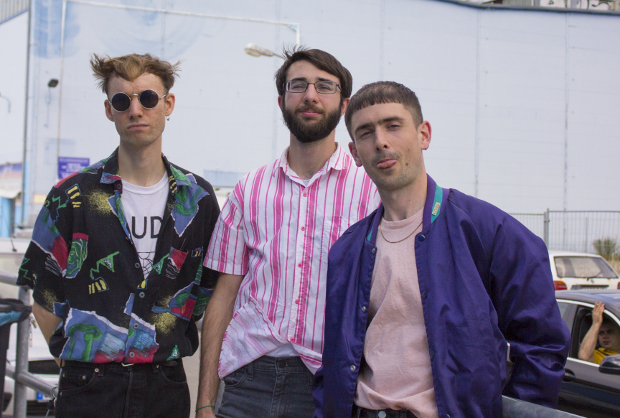 Thirty years after Einstürzende Neubauten artistically strategised against architectural takeover in Berlin, the up-and-coming Plattenbau are throwing in their two cents on 21st-century living conditions in the German capital. Comprising Welshman Lewis Lloyd, Swede Hans Tobias and American Brandon Walsh, the trio has been around for the past year and a half, playing all the usual Berlin venue suspects and touring the US in March (with a stopover at SXSW) to celebrate the Bandcamp release of their self-titled debut album. Back home, they’ll be sharing our Exberliner stage at Kaffee Burger with fellow expats Piss, Bannerman and the Neukölln Country Club. Catch them at 8pm.

You toured the US in March and April – quite impressive for a DIY band.

Brandon Walsh:We just sent a lot of emails. We got this opportunity to go play SXSW, but to make it worthwhile, we wanted to play beyond just that festival. I’ve done tours there before, so I knew some people to contact, but a lot of it was just research. It was easier to book the shows in America. Here, it’s generally harder.

You tried to ﬁnance the tour with a crowdfunding campaign…

BW: We didn’t have that much success with it. I think it works better for people that are already pretty well known.  We tried to be a little bit crazy, hoping that people would think we had a cool video and then more people would see it, but it didn’t really take off  in that kind of way.

Lewis Lloyd: We still made decent money out of it.

Would you do it again?

LL: I would only do it if we needed to. If there was any other way, I’d choose it. I don’t really feel that comfortable just asking friends and relatives to give me money. It seems so much like a charity, and that’s kind of sad.

BW: If you do it in a pre-order kind of way – you’re planning something, and you need to have the initial funding to make it happen – I don’t think there’s any kind of issue with that. It’s just a matter of whether people are interested in it, if you find the right audience for what you do.

You self-released your ﬁrst album – are you looking for a label?

BW: We were hoping that the US tour would lead to something, but it hasn’t happened yet. While the album was being mixed, we started contacting labels. But once we got it done, it was kinda like, what’s the point of making it for no one to hear it? If someone wants to re-release it at some point, we can work that out, but sitting around with it, we’d just get tired and frustrated.

Is there a concept behind Plattenbau?

LL: We were kind of trying to do something very square-sounding, like the old Plattenbau buildings. But we didn’t continue doing that, because it didn’t make sense just to limit ourselves to a certain manifesto or anything.

Hans Tobias: We are all part of this precariat, this vague middle class of half-employed and half-unemployed people. There’s this immediate feeling of uncertainty, to find a new job, find a new place to live and so on. Dreaming of having a very squared life, where you live in this square box and you go to this other square box where you work, and you get there in another square box, that immediate feeling of wanting it, but not having it… that made me want to make very simple music.

LL: Our music mainly came out of jamming. We talked about it sometimes, but it just kinda happened. When we played in a room, it just became a certain sound very organically.

HT: I used to paint and draw a lot. Until I was 15, that was everything I did. I still see music in shapes and forms. Eternal Sunshine of the Spotless Mind, I can really relate to that film visually. All these strange scenes on the beach, that’s something which looks like music to me.

Your music exudes German prefab estate tristesse, though neither of you grew up here.

HT: I did grow up in such an environment. In the 1970s, the [Swedish] government spent a lot of money on Soviet-style buildings, and we hung around in malls.

LL: I grew up in an industrial wasteland as well. Also, we’ve always had our practice rooms in the former East. We were in the Funkhaus for a while, and now we’re next to the Dong Xuan Center on Herzbergstraße.

It seems there’s an international understanding of suburbia.

BW: It’s Berlin, but it is in some ways more universal than just the suburban Plattenbau experience.