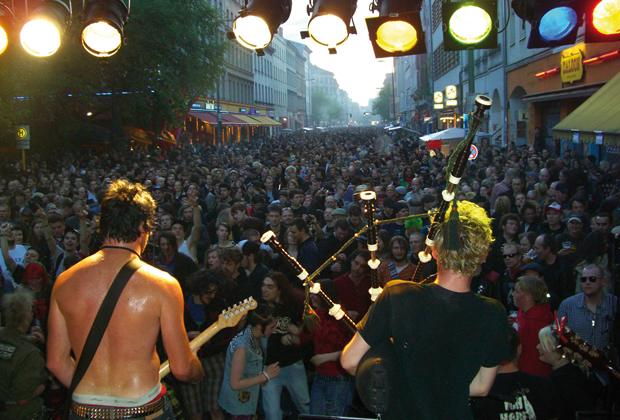 For most fun-loving folk in the capital it’s become an easy one to answer, with the evergreen allure of another party prevailing over activism and the risk of an airborne brick to the head.

And though the leftist May-hem may yet ensue, for those ambivalent ambulant ones among you we have painstakingly scouted the best places to enjoy the convivial atmosphere radiating outwards from the heart of Kreuzberg. For a headstart on the festivity, if you’re willing to forego old U-Bahn wisdom and  venture a little outside the Ringbahn, you’ll be greeted by a formidable array of housey beats nestled in the canal-side undergrowth of Griessmuehle on the far end of Sonnenallee while //:about blank’s homage to the unofficial party holiday also starts firing on Walpurgisnacht with London dance tunes from Mark E and Matthew Styles’ funky house ringing in the riots.

Come midday, and sobriety, you can head to Kreuzberg where, continuing its dogged campaign of protester distraction through loud, shiny and tasty things, the 11th MyFest street festival sprawls like a smug cat between Kottbusser Tor and Görlitzer Park. Channelling any stray aggression are US hardcore punks and emo icons, Samiam, who will dominate the Core Tex stage as the (open) secret act. With another 17 stages each offering their own antidotes to the anarchy, from hip-hop to reggae – most tastes are catered to with even children (those small humans one often sees in Prenzlauer Berg) being welcome in the mix.

Staying close-by, Merkezi’s Mai Party is Your Party gets an array of nimble hands on the decks and spinning house and disco, with Thunderheist’s Isis Salam and young electronic artist, Juli Holz, both playing live to keep you swaying the fuzz away while, crossing the great divide of Skalitzer Straße, Basement8 (in the old Kleine Reise space) will entice those with strong techno-electro leanings with their staggering spread of DJs, headlined by ice-cream licking Cómeme founder Matias Aguayo. If you’re not quite ready to leave the hood but want to start edging eastwards again, Club der Visionäre rustles up the usual suspects alongside fresh Berlin acquisition and minimal house boy Eric Volta, to represent on the riverbank and herald the start of their pulsating open-air season.

Urban Spree offers an alternative for those who might be driven to protest at the sheer excess of minimal electro with Swedish group the Mary Onettes’ Stone Roses-brand of shoegaze guaranteed to keep the fist-pumping, dance-zombies at bay at the Death Disco.

When the march leads as far as the scenic industrial borough of Köpenick, fear not – Liquid Sky has a long DJ line-up to reward your devotion to the cause, including pre-expat legend ED2000, and quirky, minimal electro man Nerk on the bill. Before you reach Poland, where the Tanz in den Mai parties are a bit thin, veer north along the river and follow the sounds of minimal house and techno to their favourite riverside haunt of KaterHolzig where the sources could be anyone from Dirty Doering to San Ramon. And while you’re in the area and upright, you can inaugurate the beach at Sage Restaurant’s Erster Mai Open Air to appropriately cheesy tropical house beats by Quell and pulsating techno and dance by Cotumo.

The irrepressible Bar 25 flies have returned to their happy stomping grounds using May 1st to launch Berlin’s version of Never Never Land, a sustainable work and party paradise called Holzmarkt, to bursts of confetti and the sounds of Acid Pauli and Die Trümmertanten amongst others.

To the queer crowd who’ve reached Rock Bottom, you’ll be met by EXBERLINER’S very own DJ Walter Crasshole who’s showing off his new piercing with punk rock at Ficken3000.

From the essential electro to dreampop and rap, all party whims are sated on the fractious 1st but whether ‘tis nobler in the mind to suffer the batons of the Polizei or shake arms in a sea of hipsters is now for you to discover.