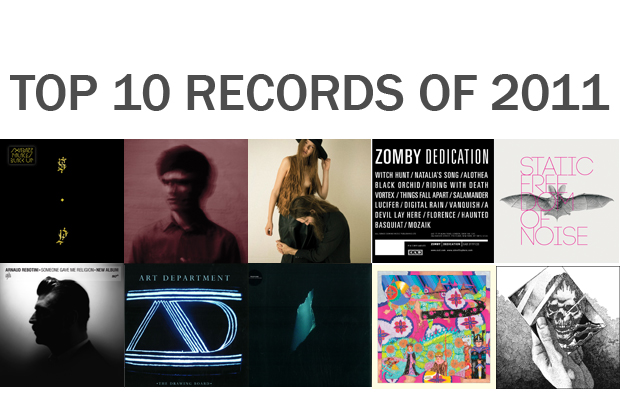 2011 was dominated by the ubiquity of Kanye and the persistency of “Friday”; it’s no wonder, then, that I was generally drawn to records in which moody ambiguity cloaked personality. Or better yet, coated everything.

Our Butterfly Whom Art in Career Limbo: I suppose this murky glitch-hop isn’t any more avant-garde than the jazz thing was back in Digable Planets’ day, but it’s no less jarring than if Jon Bon Jovi decided he was Daniel Johnston. Or have I just described this year’s Bon Iver record?

At this point, anyone who blows an airhorn at a football match is considered dubstep: Blake has more in common with Nick Drake and Joni Mitchell than Scuba and Appleblim. The problem is that he risks transforming into Rufus Wainwright within three albums. And adding dubstep to Wainwright = witch house, which should long be passé by then.

He left Berlin for Paris (and then left Paris) and Gentlemen pretty much explains the why and how, with a guitar style that finds the Spanish roots in Leonard Cohen. Any woman that would date him after hearing the directness of these confessionals is a fool. But then, it is the fools who fall in love, as Diana Ross once attempted to grasp.

Zomby/Zombie Zombie/Zombi was the Bear/Deer/Wolf of 2011, but only this former nü raver actually took the Giallo/Argento feel and made it palpable for the dancefloor. Of course, he’s since moved on, showing as much allegiance to his ideas as Kim Kardashian does to marriage (I only wrote that for the web hits. Tina Brown, call me).

Avant-gardists go doleful: a record such as this can so easily tip into the dry cynicism of falsified good intentions, but local hero Hanno Leichtmann gets a muttering Kammerflimmer groove kicking, dipping from meditative to cut-up (and thankfully back again).

And the god of that religion is Don Johnson. This may be the last credible 1980s move we’re going to hear before the Olsen Twins are elected US president. A heavy dose of heavy sequencer, with EBM/Liaisons Dangereuses leanings.

Like that one childhood memory in Eternal Sunshine of the Spotless Mind, tech-house may be the goth’s last safe hidey-hole. Okay, that’s obviously not true, though it does give you a clue as to this album’s alienated, lovelorn atmospherics.

He’s young and languid and has his entire life to garner the energy to boost his tempo up to 70bpm. This is what it sounds like in the part of the minds of dolphins not entirely consumed by fear.

The best British folk-rock album of 1968 to be released by an American in the 21st Century.

Nineteen-eighties television advertisements reinvented as ambient music: if anyone had bothered to send me the new Tim Hecker or a Jerky Boys disc they might have taken its place, but isn’t that the entire point of this album? Mellow Goad.