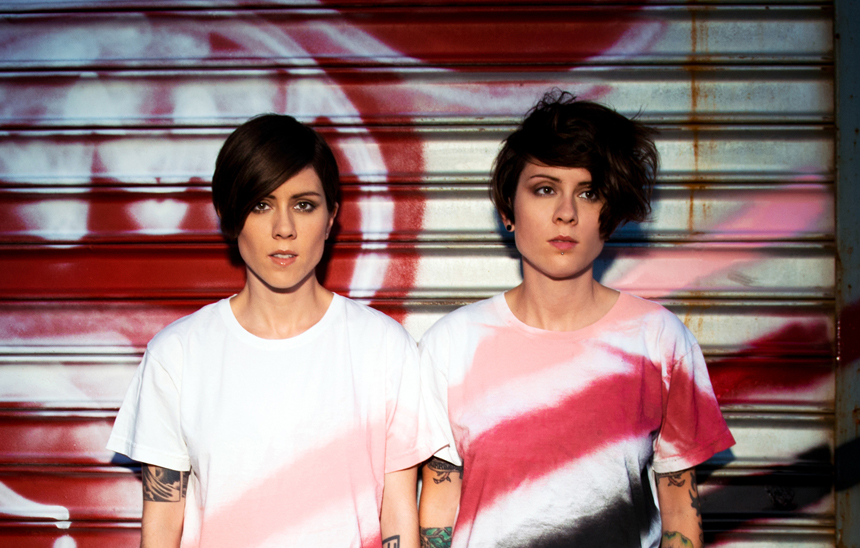 Sara Quin (left) is half of the identically-twinned Canadian indie folk-pop sister act, Tegan and Sara, which has been a steady affair since their teen years in the late 1990s.

Their likable personalities and earworm melodies have not only transcended both the Lilith Fair and queer genre ghettoes, they’ve outlasted them. Their latest album, Heartthrob (Vapor/Warner Brothers), adds high gloss and synths to their candour and looks to be their most commercially successful record to date.

Wander amidst the whispering riot grrrls at Astra on Tue, June 18.

Is your latest album a conscious decision to make more accessible pop?

I think every time we make a record there’s a number of years where we’ve sort of been under the influence of different kinds of music and film and television. We just happened to be listening to a lot more highly produced, pop-friendly music and that was interesting to us. The actual demoing process was fairly similar to previous records but there was certainly a conscious effort to select a producer – Greg Kurstin [Pink/Kelly Clarkson] – who was more knowledgeable in the world that we were interested in. Instead of going and making a pop record with someone who hadn’t made a pop record, we decided to go and make one with someone who has made amazing pop records. [Laughs]

The temptation is to think that pop is less emotionally meaningful.

It makes no difference to me that Bruce Springsteen is heterosexual.

I mean, there’s certainly pop music that is vapid and maybe doesn’t have as much meaning, but then I think people get too carried away making artistic, avant-garde records and I don’t find anything penetrable or vulnerable about them. Sometimes pop music gets a bad rap or carries all the burden of inauthentic music [laughs]. I just could never write something that wasn’t emotional, I think maybe even to a fault. Sometimes we’re so deeply immersed in what’s happening in our own lives and using music as a medium to talk about those things that, regardless of the aesthetic or the production, the songs are still incredibly personal.

Have you had fan base casualties?

I think what we’ve learned in 10-plus years of touring is that, no matter what kind of record you make, you lose people. Maybe people get older, maybe people decide that they actually like metal – who knows? There’s sort of a natural Darwinian process that happens with your fan base, so to me it was a greater risk to do something that we felt was going to keep our audience. I think that would have been self-serving in the wrong kind of ways and I’m always interested in what is going to inspire me to get up on stage every night and play music and, so far, that has always meant a bigger audience. Ultimately the fan response has been overwhelmingly supportive and I think that there’s something incredibly diplomatic about us as people and so we have drawn to us very diplomatic fans. If you lose people along the way, as long as you’re gaining people, I think the equation still works.

Do you ever find that classification as a ‘gay band’ overshadows the music?

No. I think that for a lot of years we tried to ignore that that was happening or at least ignore the conversation about it happening because we were afraid that being gay meant that we were a ‘gay band’. I think that we’ve spent a lot of time, I guess, demystifying this idea that, because Tegan and I date women, straight people can’t listen to our music and relate to it. I mean, it makes no difference to me that Bruce Springsteen is heterosexual; I still think that Born in the USA is genius. And I think our audience found us regardless, and some of the stigma, the overcomplicated dialogue in the media, has waned and now we can just be a band. On the other hand, those signifiers – being gay, being women – are very important parts of who we are. They are our identity. So it’s important for us to honour them, while also not limiting ourselves or allowing ourselves to be reduced to something that is marginal or niche. Because we’re not.

As twins in the same band, have you ever found it hard to be viewed as individuals?

You know, I think it’s weird. It’s really complicated. On one hand, I feel there’s a safety in being grouped together and then, on the other hand, I long to be analysed as an individual: for my songwriting, for my brain. So those complexities, we sort of tease them apart as much as we possibly can. We try to highlight our differences without making the band seem schizophrenic.

It can be difficult working together full-time.

We’ve become good at problem-solving. I think that we’ve managed to actually have a fairly civilised union all of these years and, honestly, I’ve been thinking about this a lot lately: I don’t know that I could be in a partnership with anybody besides Tegan in a band. My guitar player Ted – he’s been in the band for eight years. If I had to sit through hours and hours and hours of interviews and share space with Ted – I love the guy but I don’t think I could do it, you know? I’m sort of a lone wolf, and when it comes to Tegan, we came into the world together so there’s almost a natural forgiveness that happens between us that I don’t think I have with another person.

You’ve practically grown up in this band. Had you ever imagined doing something else?

Of course. I think it’s akin to being in a romantic relationship and thinking about someone else. Of course there’ve been days where I’ve wondered what it would be like to be in my own band, or be a writer, or go back to school and do something else completely unrelated to music. You know, it’s like you ask someone: “You know, you’ve been married for 15 years. Have you ever thought about someone else?” “Oh no, no no, I’ve never even considered someone else.” I mean, that’s such shit and people know it. I think fantasizing about other projects or other bands or other jobs, it’s sort of a natural, healthy, cognitive decision. [Laughs]

Any emerging bands that you’re excited about?

We just spent a month touring with a band out of Toronto called Diana and they’re fantastic, and I’m really interested in this band Lucius, and I know everybody is talking about them, but Haim is fantastic. I’m really excited by the diversity in the music I’m interested in right now and that so much of it is being made by women.

And lately it doesn’t seem to be defined by the fact that it’s being made by women.

Well, it’s interesting. I’ve been reading conversations around feminism and sexism in the music industry. There was that wonderful essay that Grimes wrote about the sexism that she’s experienced, and a couple of other very interesting articles about festivals and the fact that they’re so male-dominated, even though, when one looks at what music is incredibly successful right now, it’s mostly women. But then on the other hand there’s still all the same old bullshit that happens, you know?