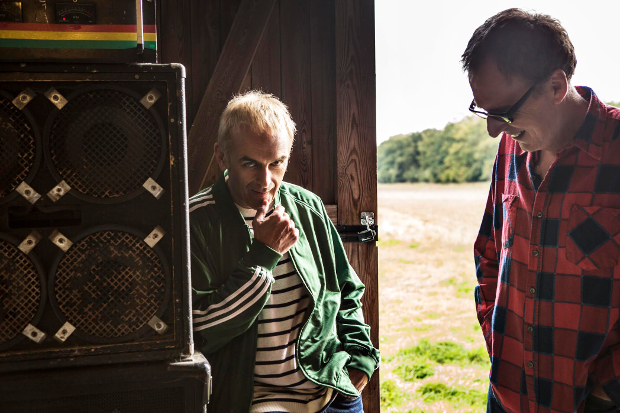 Karl Hyde (photo, left) and Rick Smith’s (right) project Underworld needs little introduction: from the iconic “Born Slippy .NUXX” featured in Danny Boyle’s Trainspotting to directing the music for the 2012 Summer Olympics in London, the duo’s career has solidified itself in the electronic music canon. After some time apart from one another – Hyde releasing two albums with Brian Eno and Smith collaborating further with Danny Boyle – the pair are back together, touring their latest album Barbara Barbara, We Face a Shining Future (available for stream) at Columbiahalle on March 17.

It’s been six years since your last album together. What brought you back to Underworld?

We like working together, and we didn’t stop touring together. We enjoy that experience of 90 minutes on stage, just cutting loose and expressing ourselves through the music. We’ve always enjoyed that. We just needed some time apart doing other things. After you’ve been together for so long, it’s very easy to feel trapped by a relationship. Most people would go through most of their lives feeling trapped and being miserable, or they’d get a divorce. Break up. But we thought there has got to be another way. For us there was this weird hybrid way – well, we’ll stay together touring, but we just won’t make anything anymore.

How was it working apart from one another?

It’s fantastic to see my partner get to do the things he wants to do without the burden of me in this relationship. We could have other relationships where he could be different, because I wasn’t around, and the same for me – it was an exciting and important time. But then there comes the time when you notice something’s missing. And the thing that’s missing is the guy you were kind of trying to get away from. And then you realise you’re not trying to get away from him anymore. All of a sudden, five, six years down the road I couldn’t see any negatives about working with my partner, and then we got to a place where we could go: “Well, let’s just you and me run off and hide away from the world and be like kids. Stick two fingers up and be mischievous, naughty.”

How did it feel getting back in the studio together?

We started everyday with nothing on this record. We’d start with ourselves, and Rick would say, “You are enough, so just turn up.” We’d turn up with our piles of kit and we’d start making some sounds and when we found something we really liked, we’d press record and go from there. The plan was to write something new every day. We’d just do two days a week. This was the quickest record we ever made. It was made in under a year but in actual fact, if you compress the time together it was probably made in a few months.

Underworld records have traditionally taken up to three years to make in the past for some weird reason. With this record we’d learned so much from being apart that it seemed really foolish that two people who are really good at improvising together had never made a record by improvising. We tried it this time and it was great. Really good fun! It really felt like we were kids.

What’s the story behind the album name, Barbara Barbara, We Face a Shining Future?

Well, Barbara is Rick’s mum and the title is something his father said a few months before he passed away last year. He was being, in my imagination, really inspiring to his wife saying that everything is going to be okay: “Barbara, Barbara. We face a shining future.” I heard that he had said that and I instantly knew that we had to call anything we did together that, whether it was an album or a building, whatever. We had to call it that phrase. I’m really pleased that Rick agreed with me. A lot of our titles are things we just pull out of the air because we have to title a sequence on the computer before we start recording so they end up with these titles which initially have nothing to do with the music but gradually they sort of come together and over a period of time you say, “Well, of course it has to be called that because that’s perfect for that piece of music.”

What can folks expect to see at your show?

We’re going to cut loose and be in the moment, visceral and physical. I adore machine music – this combination of humans and machines. Kraftwerk did this – they behave like robots but they have a humanness that is moving across this absolute machine. That’s really exciting. For me, people like Iggy Pop were great inspirations. Someone who just completely cut loose to the point where he might do something that is quite dangerous to himself.

We just kind of put the two together – what happens when you are so passionately excited about the music you are playing that you express it through your physical euphoria, letting the audience direct you. We’ve had a fantastic response to the album, so we’ll see how people like the show. The tour starts here in Berlin. That’s exciting! Someone asked, “Is it deliberate that it starts in Berlin?” I hadn’t thought of it but what a great place to start! For me, German electronic music was the start. It was these early bands like Kraftwerk, Tangerine Dream and Can that blew our minds. When we heard acid house in the 1990s we thought, hey this is just Tangerine Dream with an impressive beat.