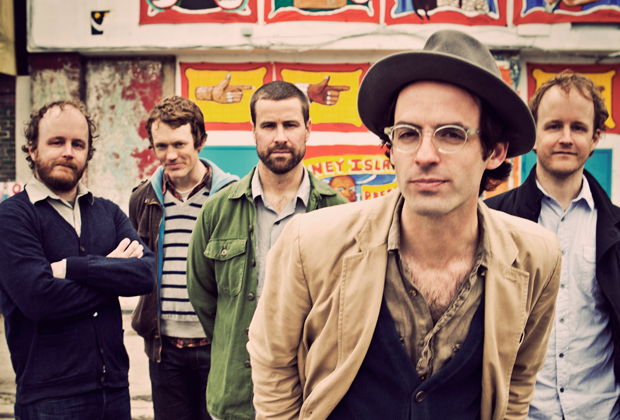 After having single-handedly hallelujahed Clap Your Hands Say Yeah toward the big time, puzzled music bloggers spent the last four years launching their fingers toward their Macbooks in an attempt to account for the disappearance of their prized blogrock juggernaut.

Rumors of a break-up were circulating, but just when hope appeared depleted, a promo video appeared on the band’s website – a new album was in the pipeline.

Lead singer Alec Ounsworth – author of the group’s unconscious contradictions, confusing metaphors and frolicsome chronicles of self-discovery – discusses CYHSY’s surprise comeback, including a slot in the open air at this year’s Berlin Festival, leading up to the release of Hysterical (V2).

You guys seemed to be doing everything right as a DIY band and then… chaos?

The reason we took a break was because the idea of making a third record just to make it didn’t make a lot of sense.

When you’re making records you want to get back into the studio because you actually want to make a record; you don’t want to do it just “because”.

It’s a weird career in that way, because maybe in other jobs you are compelled to do X, Y and Z, but being a musician, you have to want to perform, and you have to want to do all these things that come along with it and, therefore, you have to take a break when it doesn’t seem right. So, that’s what happened.

At what point did you say, “Okay, let’s get back together and make our third album”?

Well, I had done two projects, and everyone else had been working on their own material in one way or another. We started talking again for no particular reason and it just seemed like the right time.

Maybe selfishly at the time, I just proposed the idea and everybody was up for it, but I wasn’t asking anybody to drop his project to restart this one.

I think they may have recognized something in this band that I might not have seen until I had taken the break myself. It was easy for them to come around, but it took me a second.

One of the new tracks is titled “Ketamine and Ecstasy”. Does that give us a clue?

It’s loosely tied to university experiences. It’s like trying to find oneself or maybe not even finding oneself but using recreational drugs to get to some place that ends up confusing you. It’s not an anti-drug song, though.

I actually remember, back in college, I never used ketamine, but I did use ecstasy from time to time to make sure that there wasn’t any question about having a good time.

I used a little bit more of it at festivals or college parties for other experiences to make you confused and alienated and make you feel like a stranger even to yourself.

There weren’t any fraternities at our school. But if we did have them, I don’t think there would have been enough ecstasy to get me through that [laughs].

I noticed tamer vocals and a more direct guitar attack on the new record, as opposed to some of the frippery on the first two albums. A new direction?

Not necessarily. You’ll hear synths at the very beginning, but they just happen to be the string synths. Maybe that sound is somewhat different than some of the synthesizers we have used in the past, but it’s the same sort of concept.

The strong guitar presence came from working with [producer] John Congleton, and I think he wanted to bring that out from time to time.

The tamed vocals were not done consciously, but since the last record I started to understand what this band was – a group that just surged forward. It’s like a wave, and vocally, it’s like body surfing in front of a wave carrying me.

The trick for me, which I didn’t realize when doing the first or second record, was how to fit into that scenario. Because vocally, I wanted to stick out, but I also wanted to be in with the rest of the music. Maybe consciously we considered that this time around, but I believe it was more of a natural thing.

Is there any particular message that you’re trying to convey these days?

To a large degree I was trying to stick to female protagonists in a lot of the songs, like “Hysterical” and “Misspent Youth”, representing a somewhat abstract relationship with a character which might be a combination of a lot of different female figures who I’ve met in my life – as awkward as that sounds.

But yeah, women figures whom I’ve met throughout the years that have come to embody a sort of fictional character.

Your performance at the Berlin Festival will be highly anticipated. What do festivals mean to you, anyway?

Well the only things I can think of are the normal things that happen at festivals, like people passing out in odd places and that sort of thing.  But looking back, I remember going to Lollapalooza in Philadelphia when I was 13.

Rage Against The Machine was protesting Tipper Gore’s music censorship group and they came out on the stage naked and instead of playing, were arrested. That made an impression on me. I’m sorry, I can’t give you anything too crazy.

Okay, I read something a while back, and I need to get to the bottom of this. Did you drop the ‘D’ in your last name? Are you really Alec Dounsworth?

Yeah. The source was likely Wikipedia or some odd site. Can we debunk that rumor right now?

[Laughing] Yeah, you can throw that one right out. There’s never been a ‘D’ in front of my last name. People have gone all sorts of directions with my last name but some just can’t wrap their heads around it.