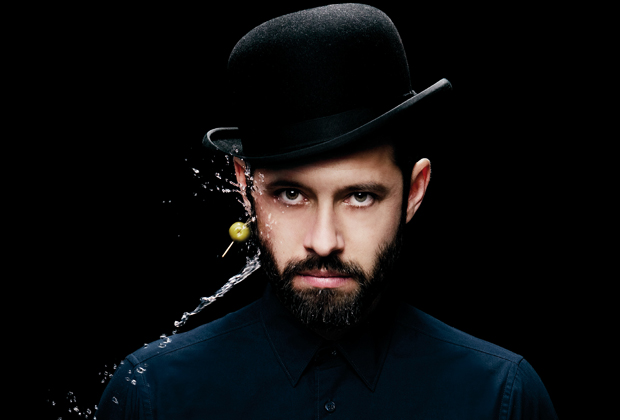 Tomas Høffding of WhoMadeWho is no stranger to the Berlin crowd, but unlike earlier visits, this Friday, (November 5), he’ll be performing on his own as alter ego Bon Homme at the opening night of Fritz Club’s new UNIversal Tellerwäscher night. EXBERLINER caught up with the great Dane to chat about having no one to blame, being a ‘good boy’ and how music is a reflection of the weather. Oh, and EXBERLINER is giving away 5 pairs of tickets: email [email protected] by 10:00 on Friday with “Bon Homme” in the subject line for your chance to get on the guest list.

What’s it like being on your own for the first time?

I’ve been in bands since I was 15 and even though I’ve been lead vocals and playing the bass, there has always been a band to back me up. People have been asking me why I didn’t go solo, but for some reason I haven’t felt the urge until a few years ago. I think I did it as a personal project and not so much to make a whole different kind of music. I guess sometimes you just do things because you feel you have to.

Also with Bon Homme there are no strings attached. WhoMadeWho started out the same way but now it’s so much more. It’s a big machine and we depend on the money to make a living. So I needed Bon Homme to be the place where I could be myself and not feel obliged to tour 100 days a year or produce a hit single to pay my rent. My ambitions are of course still there, but it’s got a different feel to it.

I’ve heard you say that this is the most courageous decision you’ve ever made.

Yes, it really was! But it’s been worth it. I’m originally a bassist, but that has changed with Bon Homme. It’s really electronic, and I’m actually working on a new instrument for myself. I feel a joy practicing that I haven’t felt since I started playing the bass back in high school. Also, it’s been really challenging that I’ve had to deal with the album reviews, both good and bad, on my own. There’s no one else to blame. And then I think I’ve gotten back to a more sensitive expression, whereas WhoMadeWho was more ‘stiff upper lip’ and tongue-in-cheek.

The lyrics seem to be a little deeper in Bon Homme as well.

I did that very deliberately. There’s a part of my music that doesn’t fit in WhoMadeWho. I’m too much of a wimp. I hope that’s what I can get to do with Bon Homme.

How important is experimenting to you?

It’s really important. There are a lot of decent mainstream musicians who just want to make the ‘perfect song’ and don’t care whether they’ve found a new sound or challenged themselves. I, on the other hand, love to work with my expression and the genres. Of course you have to follow your intuition, but working with music in the plain and traditional way just doesn’t turn me on.

WhoMadeWho is what one could call a classic live band. Should people expect the same from Bon Homme?

It’s of course up to someone else to judge, but I think I’ve tried to do something to spice up my live show. I’m actually on my own on stage, which of course I’m not the first to be, but still it’s something new. Somewhere in between of a DJ and a live band. This means I don’t really have that many other artists to lean on compared to for example a classic rock band. I still get inspired though. From a DJ I can learn what it is that makes people go crazy on drugs at four in the morning, and on the other hand I can also try and find out what makes people cry listening to Coldplay. I try to combine those things to find my own niche.

So you don’t need a costume to make it interesting anymore?

Ha ha, no. And I don’t really think we did in WhoMadeWho. It sounds so pretentious, but we always tried to be inventive instead of lagging behind, and although we weren’t the first ones to dress up on stage, we were still an inspiration to some. I always wanted to dress up on stage, even when I was in Garbo [Høffding’s first band]. But because of the mood it didn’t make any sense. You can’t play wimp-rock and dress like a mad man. This time I think I’ve found my own style on stage, but I don’t dress up as such.

WhoMadeWho was a very international Danish band and was probably at least as popular in Germany, for example, as well as other countries. How come?

I think the reason is that we didn’t begin from Denmark and then out. We’ve actually worked our way back to Denmark more or less. We started playing internationally and had to respond to another kind of audience. The Germans love electro and in Southern Europe and South America where the sun is shining they prefer danceable music. I think in Denmark a lot of music describes the feeling you get when you look out the window. It’s very dark and moody.

Your name is French. Are you a Francophile?

I’m not a Francophile in life, but when it comes to music, I got a lot of inspiration from Air and Daft Punk. And then I owe a lot of gratitude to Sebastian Tellier. He has a way of mixing the lyrical vibe with classic electro without getting too depressing. Sexuality is the sort of record that you can listen to at home to get you in a good mood; and not in a ‘yeah yeah let’s go’ kind of way. Also, my name is an indication that I’m totally aware I’m not a dangerous and crazy rock’n’roller. I think I’m more of a good boy, and I like honest declarations, ha ha.