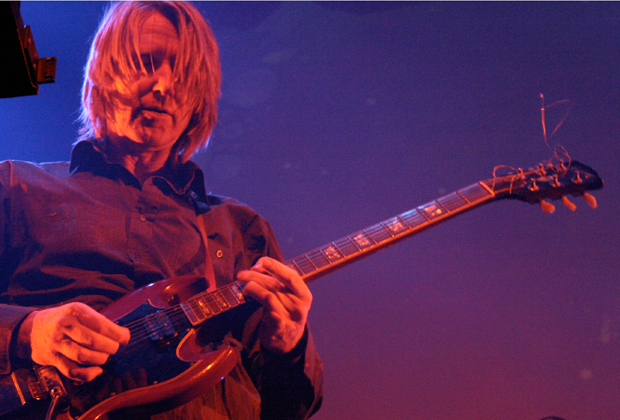 Even among krautrock acts, Agitation Free, co-led by the legendary Berlin guitarist Lüül stands out as pretty weird. Part of the early 1970s “Berlin School” of kosmische along with Ash Ra Tempel and Tangerine Dream, Agitation Free blended late-1960s psychedelic rock with the avant-garde. They took the drone of the Velvet Underground and the chiming guitars of the Grateful Dead, added jazz and world music, and experimented with found sound and lengthy improvisations.

Agitation Free hasn’t received the geek love that Can or Faust did, but they reunited to record River of Return (Revisited/SPV) in 1999, the group toured Japan in 2007 and released Shibuya Nights: Live in Tokyo (Cherry Red) last November. With a lull in Lüül’s work with 17 Hippies, they’re back for a brief reunion which arrives at Postbahnhof on Tuesday, March 20.

What’s your relationship like with the other guys in the band? Have you stayed in touch?

We’re still friends, in a way. We never had big fights. In Amon Düül, they call their lawyers to communicate.

But why get back together now?

We first reunited in 1997. When I was 45, I celebrated my birthday at the Tränenpalast and invited everyone I had ever played with – 45 musicians onstage, including the members of Agitation Free. We hadn’t played together for 20 years. And we said, ‘Let’s do a record.’ We did a few concerts in Japan in 2007; we didn’t know they were recorded, but after the show we got 24-track tapes. The band is 30 years old, so we thought we could take some time in post-production. When it was ready we thought, if there’s a record we should do some concerts.

Is it true that you decided to play those Japanese shows because a figure of [AF kosmische keyboard pioneer] Michael Hoenig was added to a Tokyo wax museum – where you already had one?

We have a big fan there who’s a businessman who likes what we do; he’s very rich, and he has a wax museum in the Tokyo Tower. There are 200 wax figures – astronauts, world leaders, and a few musicians. He has Klaus Schulze and some others. It’s very funny – we have fans in Japan but we’re not so popular. Well, everything is so strange that you can’t really tell. And he said ‘I want you to play here.’ So I said okay.

The first Agitation Free album, Malesch (Revisited/SPV), has some samples that you recorded while touring the Middle East in 1972 on the invitation of the Goethe Institute.

It was recorded with an Uher tape recorder [a portable reel-to-reel device]. I remember when we were flying from Egypt to Lebanon they didn’t believe the synthesizer was a musical instrument. They thought it might be a bomb. So we had to play it for them.  When we were in Cyprus entering the airplane, the pilot said, ‘I fly the airplane, you play for us.’ We recorded it and we put those sounds in.

That was pretty advanced, given the technology of the time, no?

We were an avant-garde band. It was due to the influence of [father of the Berlin School] Thomas Kessler. When we started out, we didn’t have a rehearsal room. [Drummer] Christophe Franke’s mother was a violin teacher who had contacts with music schools and she was fed up with us rehearsing in her cellar. So she asked this guy at a music school about getting a rehearsal studio and they did. There we met Thomas Kessler, a Swiss composer who knew everything about avant-garde music. He told us to buy a synthesizer, taught us how to improvise, showed us what ideas you can develop. We met a lot of avant-garde composers, and that was a strong influence on our music.

What music were you listening to before that?

We were influenced a lot by the Beatles. Our first guitar player, he was in England in 1968 and he saw Pink Floyd and came back with The Piper at the Gates of Dawn. I was listening to Revolver and that was already psychedelic but Piper was something else. That was a huge influence – Pink Floyd started to look for new sounds, and we did, too.

And what did Kessler, this classically trained composer, make of these hippie Pink Floyd fans?

He liked our energy. He wasn’t a hippie, but he was very smart, with a good sense of music –  he was into Stockhausen and all of that stuff. He said you can do any kind of shit you want but you have to stand behind it. We were very open-minded and [influenced by] drugs – hash and LSD – to go find new limits. That’s what he was trying to do with his music, too.

You and these other German bands were making music in a way that no one else really was.

Yes! We were proud to develop our own music and not repeat what the Americans and English did. That’s part of krautrock – it’s a very special kind of music. We wanted to lose this Cold War, post-war… There was a revolution going on. I remember playing in France and we played one piece for two hours. It was such an intense, powerful concert and we finished and there was no reaction – 200 people just walked out. We had no idea if they were overwhelmed or what.

17 Hippies and your solo work is very different.

I was always open to any kind of music. But I wasn’t ready to stand up as a singer-songwriter until 1980, when I was living in New York with Nico. I hung around CBGB, we lived at the Chelsea Hotel, we toured with John Cale’s band. Nico and I were together from 1975 to 1979. We were on drugs.

Agitation Free isn’t as well-known as some other krautrock bands, such as Neu!, and you’re not in Julian Cope’s Krautrocksampler. Any idea why?

We have some shared history with all of those bands but we started very early – in 1967. Record companies wanted to do a deal with us but Christophe Franke went to Tangerine Dream and [guitarist] Axel Genrich went to Guru Guru. So we missed that train – the other bands put records out and we didn’t. And we never played in the UK. We knew we did something very special but we didn’t think we deserved more attention or anything.