Flowers, fashion, periods: why Berlin’s start-up scene sticks to traditional gender roles, and what can be done about it.

By now it’s no secret that Berlin’s seem ingly progressive, forward-thinking, non-hierarchical start-up scene has a serious gender problem. Women represent over half of Berlin’s work force, but just 27 percent of start-up employees. Take out the “traditional female roles” such as PR, marketing and HR and look at back-end development and engineering roles, and this figure comes down to around three percent. And what about the bosses? In Berlin start-up land, a shameful 13 percent of start-ups are female-founded – compare that to the European average of 17 percent, or 24 per cent in Silicon Valley.

And it gets worse. It’s not only that so few women are founding start-ups, it’s that when they do, the ones that get the most attention fall squarely along stereotypical gender lines. Think of Ida Tin’s period tracker Clue, Pia Poppenreiter’s paid dating app Ohlala, or Anna Alex and Julia Bösch of online personal stylist The Outfittery. All are in novative companies that deserve the consider able buzz and finances they’ve attracted – but all deal with ‘girl things’.

One of Berlin’s most prominent female founders is Franziska von Hardenberg. From a very young age, she knew that one day she would found her own business. And so she did. After studying marketing and communications and cutting her teeth in companies like Rocket Internet and Zalando, Von Hardenberg launched Bloomy Days, the world’s first subscription service for fresh, unbound cut flowers, in 2012.

“I’ve always adored flowers,” explains Von Hardenberg. “I used to buy them all the time, even for the office. When my local shop closed, I looked online to see about getting them delivered but found that the only thing available was bound bouquets – the sort of thing you would send as a gift, but not buy for yourself. Germany has an €8 billion market for flowers, and I realised that this whole part of the market was completely overlooked by the start-up scene. I’d found my idea!”

Von Hardenberg sat down and wrote a business plan, and soon became convinced that she’d found a lucrative gap in the market. Launching a crowdfunding campaign in May 2012, she received €100,000 in just 93 minutes. Over the last three years, Bloomy Days has received seven-digit funding from investors like Atlantic Ventures and Otto Capital.

Von Hardenberg believes that being a female-founder has never held her back: “It didn’t enter my thoughts when it came to setting up a business and I can’t say that I’ve ever experienced fewer opportunities because I am a woman. Founding a business takes a lot of hard work and dedication, regardless of gender.”

She brushed away questions about the gender-normativity of a woman founding a flower start-up, saying, “Often men pick fields that they think will make them €1 million by the time they’re 30. Women tend to follow their passion. You have to handle the product every single day, so it’s really important that your business is something you’re passionate about. And with Bloomy Days, I’ve been able to change and disrupt a whole market.” 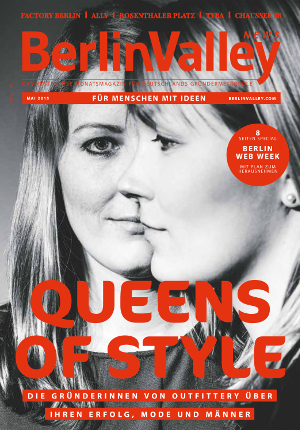 Likewise Alex and Bösch, who’d also worked at Zalando and Rocket, built their business by exploiting a gap in the market. “During our time at Zalando, we recognized that men’s fashion was still truly underrepresented online. When we were in New York, a friend of ours hired a personal stylist for $100 per hour. He usually was no fan of shopping, but this time he was really happy. This was the moment when the idea of Outfittery was born: we thought that every man should have the possibility to get his own personal stylist – at an affordable price.”

Alex and Bösch have worked hard for their success: “There were many sceptics, especially in the beginning, saying that a personal shopping service will never appeal to the mass market. But with 300,000 clients in eight countries, we’ve very much proved the critics wrong.” But they don’t feel they’ve had to try any harder than their male counterparts. “That’s an old cliché. We’ve even attracted more attention than male founders, by the press, for instance. This sometimes truly helped to open a door for us that might have been closed to others.”

Then again, that press coverage can be telling. In May 2015, Alex and Bösch became the first, and so far the only, female founders to grace the cover of start-up magazine Berlin Valley. The headline? “Queens of Style! The Outfittery founders talk about their success, fashion, and men.”

Hilary Klassen, founder of open-source HR consultancy platform Quahog, sees a complex issue. “There are definitely unconscious biases when it comes to women in business, from both sides. I’ve mentored and coached many women to help them better understand how to push, how to negotiate. Being an entrepreneur definitely takes a different talent and mindset. You need to be willing to take risks and be business-minded.”

In that framework, she suggests, women might be more comfortable pursuing typical ‘women’s interests’ over male-dominated fields like financial tech, games, advertising, e-commerce or sports. “It’s not that women don’t have skills in these fields, but they do have a tendency to question themselves more. I’ve seen women check themselves out of roles because they themselves have decided that they don’t meet the requirements. And, if they’re pitching to predominately male venture capitalists, it is often the case that those guys want to see another man on the other side of the table.”

Aleksandra Gavrilovska, who works as a mobile engineer for Soundcloud, confirms those biases. “When I was a child growing up in Macedonia, women were central to the labour force. My programming teachers were female. I never felt discouraged from becoming an engineer and always felt that I was treated equally.” She was dismayed to find out how different the scene was in Berlin.

“Trust isn’t given by default. In general there’s a need to prove more. Men can be sceptical or suspicious of your abilities, and women can be equally as hard against other women. It’s a real shame.” Gavrilovska is the organiser of the Berlin chapter of Women Who Code, a non-profit organisation inspiring women to excel in technology careers through technical training and networking. “Often recruitment of women can be a tick-box process,” she continues. “I recently received a message from a head-hunter that was really positive about my skills, and then said, ‘Plus it would be really awesome to have a woman on the team!’ You start to wonder if they want you for your skills, or if it’s to fill a quota… That can be harmful too!”

While many of these savvy female founders have exploited gaps in the market and created new industries around their interests, the risk is that it continues to marginalise women if the companies they found keep falling into traditional female realms, or if they stick entirely to PR and marketing roles over engineering positions.

“It can be a vicious circle,” says Laura Laugwitz, a founder of Rails Girls Berlin. “From a very early age, girls at school are discouraged from engineering and tech, and this goes all the way up the chain. Today we see very few women working and founding in this area, and why would we, if it’s been drilled into them all the way through that this is a ‘boy’s’ thing? The whole education system needs to change to address this and encourage girls at an early age.” Laugwitz’s nonprofit introduces women with no prior experience in programming to Ruby on Rails programming software. Together with Women Who Code, it’s part of a growing number of support networks for technologically inclined girls and women in Berlin. Another is Berlin Geekettes, founded by American expat and veteran start-up worker Jess Erickson. With some 6000 followers, the group supports women in tech through events, networking and mentoring. Erickson argues that more female engineers wouldn’t just benefit women – it’d benefit everyone. “With computer programming specifically, we have a serious lack of engineers. In Berlin, companies are struggling to hire software engineers – even top tech companies. If as many women went into engineering as men, this would be a huge win for Germany and abroad.”

But it’s not just a technological shift that needs to happen. It’s a cultural one as well. “In the 1960s, when women first entered the workforce en masse, men would go and do their networking on the golf course or over drinks. There is still a legacy of that today,” says Klassen. “If you look at job descriptions for start-ups, so many of them pride themselves on their foosball tables and beer and pizza nights. They think it’s cool. It’s still a very male-oriented culture.”

Gavrilovska agrees. “When you’re one female in a male team, you can feel like you’re representing your whole gender,” she says. “Men have built an environment that is welcoming to them, and sometimes this needs to be challenged. Of course it’s hard, as a woman, to turn round and say ‘I’m not comfortable with this’ but sometimes it’s important to do so. Women do need to adapt to the environment, but the environment also needs to adapt to them.”

Change also needs to come from the top down. “Many companies like to support initiatives such as Rails Girls, but they need to do more,” says Laugwitz. “We’re not here to fix their problems, but to empower ourselves. Companies need to implement anti-bias trainings and promote intercultural communications. They need to start with themselves, and they need to stick to any changes they do implement, not just abandon them six months later when it gets hard. It can be exhausting to push for change. There are a lot of burnt-out activists.”

The great hope is that as more female founders rise to prominence, women in Berlin’s start-ups will continue to challenge and change the system, providing role models and paving the way for future founders in all fields. The number of female founders in Berlin is low, yes, but it’s more than tripled since 2012, and set to keep growing. Diversity breeds innovation.

And in the end, as long as women aren’t actively discouraged from entering “male” fields, having more female-oriented start-ups out there isn’t necessarily a bad thing. Laugwitz points out that “when it comes to product development, underrepresentation can have disastrous consequences. The very first air bags, for example, were tested using male crash-test dummies, and killed many women and children when they were launched. Early voice recognition software, also developed by and for men, did not pick up the female voice. Women literally did not have a voice! In general, we need more people creating the things that they need.”

Erickson concludes: “There should be a greater proportion of women in the creation and decision-making process on all fronts: from investing to mastering code to jump-starting one’s own business. The more women get involved with tech design, development and leader ship, the more successful and diverse our companies and products will be.”