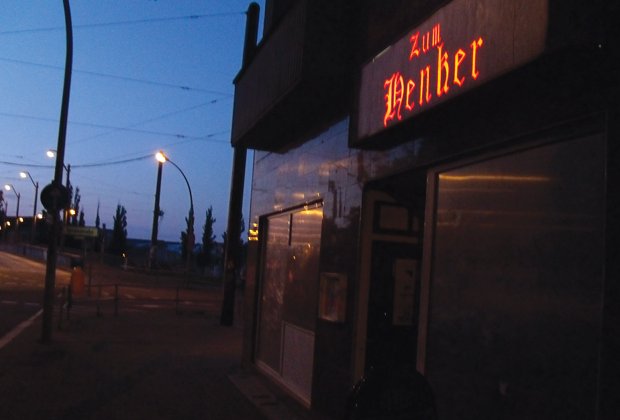 Graham Anderson pushes open the door of Zum Henker, Berlin’s notorious, expat-owned neo-Nazi bar, and orders one of its signature cocktails: the Himla.

It’s the worst bar in the worst street in the worst part of Berlin. On Brückenstraße in the East Berlin suburb of Schöneweide, Zum Henker, or The Hangman, would look like any other bar if it weren’t for the missile-proof steel plate windows. Inside, the décor features a hangman’s scaffold and a noose offset by a gigantic Nordic wall mural straight out of the Nibelungen sagas. Here, Odin is more than a beer brand. Here, the Norse god rides high and mighty. Enamelled wall plaques remind the bar’s guests that this is a “German protectorate” and “Careful, the enemy is always listening,” indicating that Zum Henker is on war footing with the Federal Office for the Protection of the Constitution (Bundesamt für Verfassungsschutz), in charge of monitoring extremist groups.

A recent Thursday night, 11pm: only a handful of large customers with biceps like sides of beef remind Hangman guests that opposing opinions are not recommended. Hairstyles popular four score and more years ago – shaved sides of the head with a short waft of hair on the top reminiscent of a flat-top aircraft carrier – awaken déjà vu feelings from the glory days of Hitler’s rise to power. The clientele is virtually all-male, with the exception of the friendly barmaid and one other woman, possibly a friend of hers: typical German girls-next-door, polite, neatly attired and well-spoken. And just a tad smaller than their Aryan drinking partners.

Scrawled in black marker on a faded whiteboard above the white-tiled, butcher shop-like bar is the world’s most politically incorrect cocktail: The Himla, a diabolically sweet concoction dedicated to the Third Reich’s chief executioner and death camp organiser, Heinrich Himmler. A brew of raspberry rum and wild berries, the €4 drink’s special effects include turning redder and redder as the night wears. By midnight it’s a Bloody Himla.

The mastermind behind the Himla is none other than the bar’s London-born-and-bred owner Paul Barrington, a skinhead who moved to Berlin over 20 years ago. In 2003, Barrington was sentenced to seven months’ probation after publishing pictures of policemen on the internet accompanied by a machine gun bearing the slogan “This bullet is for you.” He established Zum Henker in a former East German furniture shop turned Thai restaurant in 2009.

Since then, the Brückenstraße fortress has become the linchpin for a number of new businesses run by neo-Nazis. Just a few doors down from Zum Henker is Hexogen (named after a WWII explosive), an outdoors store selling paramilitary paraphernalia such as blowdarts run by the far-right National Democratic Party’s Berlin frontman Sebastian Schmidtke. At least 10 other businesses allegedly run by neo-Nazis have nestled into the surrounding streets; neo- Nazis are also renting flats in the area, living cheek-to-cheek with migrant families. The NPD’s three pillar policy of the fight for the minds, the streets and the parliament seems in full swing here.

Ironically, almost diagonally opposite the Hangman sits the office of Germany’s Die Linke (post-communist left) party parliamentary leader, Gregor Gysi, just a Molotov (or a Himla) cocktail’s throw away. Along with numerous anti-fascist groups, Gysi and the Köpenick-Treptow Social Democrat mayor Oliver Igel have been trying to shut down the neo-Nazi hotspot for years. They presented the building’s owner with an ever-growing list of criminal acts that have happened outside the bar as drunken skinheads roam the street late at night, such as when three Zum Henker customers beat up a young guy at the local railway station because he looked like a lefty. The only thing that saved his skin was the staff at a nearby döner stand coming out with their three-foot long kebab spit and driving the neo-Nazis off. The three young men were arrested and charged.

The noose tightened on Zum Henker last April when property owner ZBI Erlangen finally bowed to pressure and issued Barrington with an eviction notice for the bar and his residence above it, accusing him of failing to warn them of his intention to slake the thirsts of Germany’s far-right drinkers. However, Zum Henker won a stay of execution after Barrington issued a court injunction preventing its immediate closure. The bar’s fate now rests in the hands of the German judges.

“The problems with Zum Henker are all media hype,” says the female attendant of a drinks outlet just down the street, also run by neo-Nazis according to Antifa sources. Not so, says the four-star international NH Hotel directly opposite the Hangman’s beer garden, where bus loads of Chinese tourists regularly disembark in front of patrons. Visitors entering Zum Henker’s beer garden are warned that hunting knives, guns and other weapons are strictly verboten. Nonetheless, NH Hotel management makes no bones about wanting to see the Hangman swing on the gallows of German justice.

But optimists should temper their hopes. Hexogen successfully staved off an eviction notice after the building’s management similarly complained that the establishment had not revealed the true nature of its business, setting a dangerous precedent under German law. Should Zum Henker survive its Day of Reckoning, Brückenstraße may well turn from a front line into a full-scale battlefield in the NPD’s Battle for Berlin. The verdict will fall this summer.