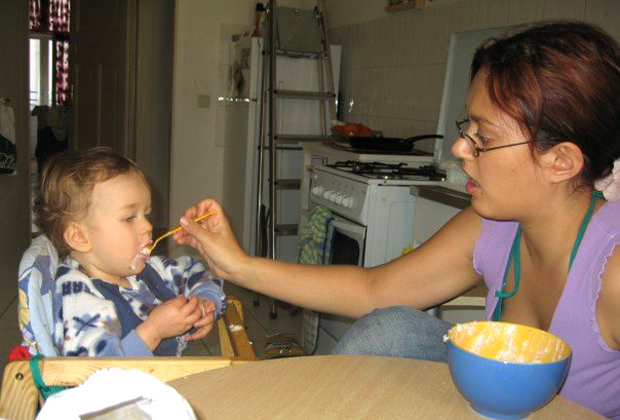 When is the best time to have a baby?

I was talking about it this topic to a German friend recently, and he was being so judgemental about British teenage mums that I was getting kind of defensive about it.

“There are a lot of bad sides to being a teenage mother,” he said. “Financially, you’re fucking up your entire life. Emotionally, you’re not ready. Health-wise, it’s a bad idea.”

“It’s not that bad, health-wise. I mean, it’s not great. And obviously, twelve-year-olds having kids, that’s a disaster, health-wise. But you’re meant to have your first kid around nineteen, twenty.”

He did that thing Germans do when they pull the skin under their eye downwards. It means: ‘Come off it, pull the other one, mate.’

“That’s what doctors say,” I said, defiantly. “Health-wise, you should have your first baby at nineteen or twenty.”

“Yeah,” he snorted sarcastically. “Just in time to give it to your mum on your twenty-first birthday, so you can go out clubbing with all your friends, getting shit-faced.”

“You’re pissing me off, now,” I said, sulkily. “There’s plenty of forty-year-olds who still go out clubbing. You’re not exactly in on a Saturday night yourself. Cut the kids some slack.”

The thing is, the part of England I come from, Essex, it’s kind of “teen mum central”. When I was new to Germany I made friends with a girl from Scotland, and she said to me, in this really kind, understanding voice:

“You have a lot of bairns wi’ bairns in Essex, don’t you?”

I always thought it was a beautiful way of putting it, although I also like the way the black kids say “babyfather.” Anyways, my school, Chadwell Heath High, was no exception. We hit puberty, and, in our school, all the pretty and popular girls started having babies almost immediately. And we – the non-pretty, non-popular girls, we kind of despised them for it. It was so distasteful, disorganized of them!

Their bodies changed – they changed from pale, skinny teenagers into pale, bloated women – almost ovenight. Just before my GCSE’s, I saw “The Most Popular Girl in the School” at our local Tesco’s supermarket– this was the girl who’d been the most beautiful, the most popular, the girl who’d had breasts in Year 7, who could bring the whole of the Lower School playground to a standstill by crying, the girl who was that beautiful, she was allowed to say she liked Kevin Costner more than Keanu Reeves, and nobody teased her for it – well, I saw her in the local Tesco’s, and she looked like a swollen toad. I couldn’t believe it.

I went home and told my mum: “We saw Hayley Danes in Tesco’s today. She looked horrible.”

My mum sniffed thoughtfully. “Well, she will do,” she said. “She’s about to have a baby.”

When I had Rico, I was the same age my mum was, when she had me. 24. I guess that, because of all the girls at school getting pregnant when they were still kids themselves, I never noticed that I was, by non-Essex standards, actually pretty young to be having a kid.

It was awful. It was the worst thing that ever happened to me. I hated it. Oh, I loved him alright, I loved my son, totally, and through it all, through that whole unbearably unbearable first year, I always knew I loved him. But, still. That love didn’t make me happy. It just stopped me from killing him.

So, I thought, then, of those pale, skinny girls I’d judged. Skinny legs, violently distended bellies. There’s something almost Ethiopian about a pregnant teen. And then, when the kids are born, those girls look so beautiful, but tragic, totally Kate Moss, unspeakably council house-glamorous: smoking as they push the prams along, sulking, waiting for their flat “off of the government,” chins defiant, skin almost translucent.

And I thought of those girls, at night, as I marched up and down the Frauenhaus corridor, with Rico strapped to my shoulder, for hours at end – if I stopped marching, even for a second, he’d start crying, and the sound of his crying stripped the skin off of my body – and so I marched, for hours, and I thought of those girls, and the way I’d judged them, as a teenager.

And I thought: How did they manage it? Even with their mums helping. How the fuck did they manage it? I was such a selfish cunt as a teenager: I once spat at my mum and stormed out the house, just because she wanted me to peel some potatoes and I was on the phone. How the FUCK did they manage it? And how can British society begrudge them their housing so much? How can whole swathes of British society be so motivated by greed and spite and resentment and envy that they seriously believe Great Britain would be a better, healthier, more “moral” place, if there were just a few more homeless children in it? I marched up and down the corridor, and I felt true respect.

So, I managed to survive the first year without killing my baby. I remember the relief I felt, on his first birthday. He’s not dead yet, I thought, and I grabbed his cheek a bit too roughly, like I was checking.

But it was hard. It was a hard time for me. I don’t think 24 is a great age to have a kid. All the other parents you hang out with are all smug and married, thirty already, expressing breastmilk to go into their baby’s mashed potato and sick shit like that. All your friends your age are constantly at festivals and nightclubs and discos and things. You get old before your time. You get arthritis before your time:

“Yeah, but in German you do,” you say. “The German for nightclub is disco.”

“No,” they say. And you feel embarrassed – but more than that you feel indifference.

Well, I’m over thirty now. My son’s seven – almost old enough to go to school on his own. Now all those festival friends I had aged 24 are now childless women over 30, desperate to have kids. I guess it really is a physical need in women, hopefully they’ll invent a pill for it some day.

“Yeah, he’s really cute. He’s a graphic designer or something. He’s a couple of years younger than me, though. 27. Listen, Jacinta. Do you think I should mention that I wanna have kids some day.”

“No! Are you mad? Are you actually insane?”

I guess I’m just a bad person. Now that Rico’s a big boy, well, almost, now I have almost as little sympathy for those childless thirtysomethings as I used to have for teen mums. And I know I’m being a hypocrite – because I know, if I’m honest, that had I not had Rico, I’d be burning, yearning to have a kid myself, and I know that because sometimes, when I see a baby in the street, I get this weird kind of ache in the inside of my elbows, and a hot pang – like breastmilk exploding – in my left tit.

But, still. I don’t think anyone approaching or over the age of thirty should plan on having kids.

So, when’s the best time to have a baby? Whenever you do it, it’s always the wrong time, in a way. At 14 you’re way too young. At 24, you’re still too young. At 34, 44, you’re too old. No time is the right time, unless you’re Madonna. And, the sad truth is, we’re none of us Madonna. Leider. Just do it. Or, probably best of all, if you can ignore that half-ache in the inside of your elbows: don’t do it at all. It’ll be okay. In the long-run.