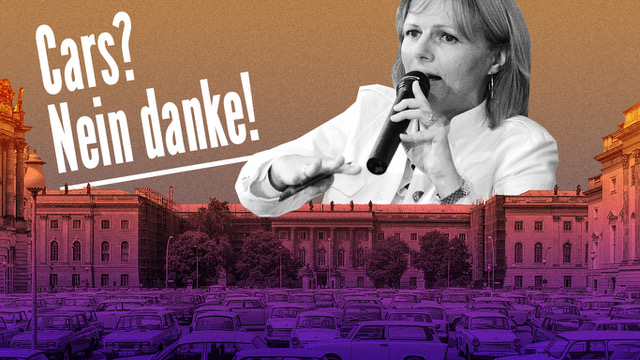 Unveiling the latest measure of her Berliner Luft ohne Fahne programme to reduce 50 percent of the city’s air pollution over the next 10 years, Berlin’s new Senator for Environment, Traffic and Climate Protection Regine Günther (independent for the Green Party) today announced a radical new measure that left journalists in a stupor and her SPD coalition partners furious: Berlin is to become the first car-free European capital by 2030.

Automobiles will be banned within the 37.5 km circumference of the city’s Ringbahn in an 88 km2 demotorised sector dedicated to pedestrians and public transport only.”

Under the banner Autobefreite Zone (“car-liberated zone”), automobiles will be banned within the 37.5 km circumference of the city’s Ringbahn in an 88 km2 demotorised sector dedicated to pedestrians and public transport only – the largest of its kind worldwide. “Berlin has always been ahead of the curve,” Günther said to a packed press conference earlier today, “so it only seemed natural that as a city we should hit the brakes and make a U-turn when it comes to car policy.” Without traffic congestion and parked vehicles lining every street, so Günther’s vision goes, communities will be able to take back space for the common good – through playgrounds, urban gardening schemes and collective Kiez-projects, not to mention through building much-needed affordable housing.

€132 million have already been earmarked for what is sure to be an ambitious undertaking. Alongside a massive expansion of the city’s existing tram network, the BVG is already drawing up plans to open up 10 new U-bahn stations over the next four years (including a surprising “Sven-Marquardt-Allee” U-Bahn station on the U1, which should link Berghain directly to the other side of the East Side Mall) with a further 22 to follow by 2030.

Culture minister Klaus Lederer (Linke), suggested erecting signs stating, “You are now leaving the motorised sector” – reminiscent of the multilingual boards that once stood on the city’s east-west checkpoints.”

While SPD mayor Michael Müller vehemently opposes the plans, there was little he or his allies could do to halt the announcement. With the Green Party snapping at a weakened SPD’s heels in the polls, the social democrats ultimately folded during late-night negotiations, with many in the party abstaining from the vote. Die Linke was more supportive yet cautious about how best to market the idea amidst fears that it could be seen as bourgeois eco warriorism that impacts proletarian commuters. Culture minister Klaus Lederer (Linke), suggested erecting signs stating, “You are now leaving the motorised sector” – reminiscent of the multilingual boards that once stood on the city’s east-west checkpoints. However, Lederer was quick to stress that this was just a light-hearted marketing strategy and not a call to militarise the border of the Demotorised Zone (DMZ).

Although technically an independent, Günther has long aligned with the Greens in the city government and has been outspoken in her visions for a greener, car-free city. Last month, Günther told parliament: “Berlin’s traffic policy is at a crossroads. Left and right are dead-ends so the only way is forward. The time has come to park our cars and walk into a greener future.”

The CDU had already criticised Günther as “anti-Auto” but faction leader Burkard Dregger had even stronger words following today’s announcement: “Since she was elected, Günther has had cars in her crosshairs and she’s just been waiting to pull the trigger. From the founding of VW to the construction of the first Autobahns, cars are inseparable from German identity. It’s like she’s killing a part of our national culture.”

VDA, Germany’s car lobby organisation, have already filed a lawsuit against the city for allegedly failing to conduct proper studies into the economic viability of such a ban.”

Strong criticism has also come from the VDA, Germany’s car lobby organisation, who have already filed a lawsuit against the city for allegedly failing to conduct proper studies into the economic viability of such a ban, as well as for infringing upon car drivers’ rights in a move a spokesperson called “discrimination, pure and simple”.

Car drivers have also voiced their anger on social media, with a yellow vest action planned for this evening quickly gaining thousands of attendees on Facebook. Under the banner “Je suis auto”, protesters are calling for street blockades across the city during evening rush hour which would, ironically, bring car traffic to a standstill.

As the debate on cars continues to accelerate, you can read up on eco-activism, green clubbing and the way to an environmentally friendly future in our latest issue, all about sustainability.