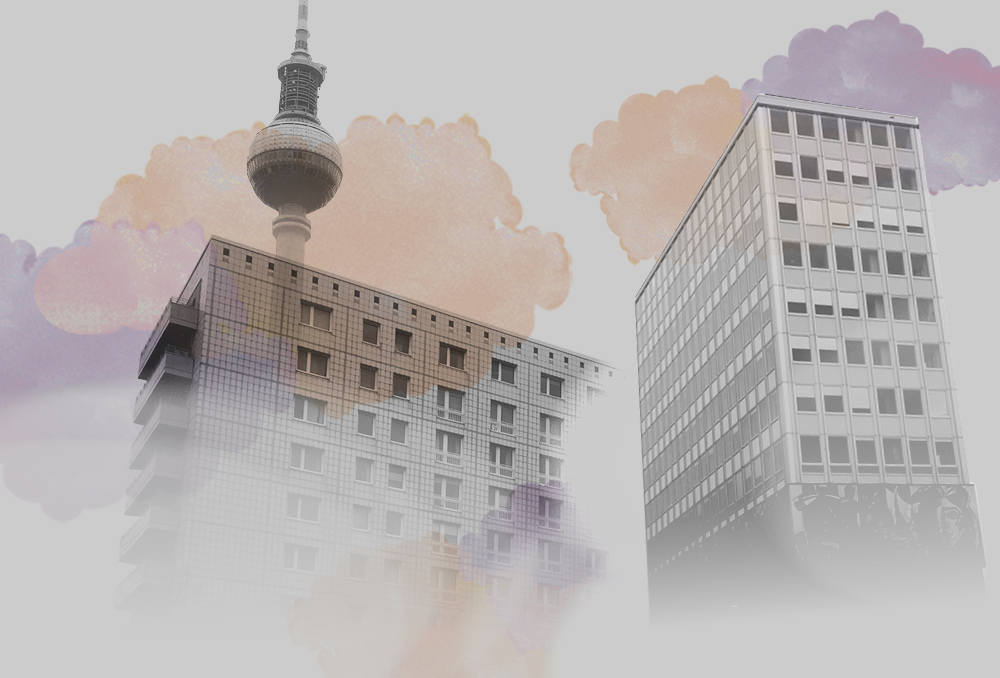 Contrary to popular belief, Berlin’s air quality is one of the worst among EU capitals. As the city government is unveiling a new plan of action, we look into what’s been done to tackle the actual problem: cars.   Ask any Berlin car-owner or taxi driver and they’ll tell you, traffic on the city streets has worsened. A feeling corroborated by official stats: the number of registered cars has increased by more than 48,000 in the last five years, peaking at 1.2 million in 2018. In February, a study by private data analyst INRIX labelled Berlin “the German capital of traffic jams”, with the average driver spending 154 hours per year sitting bumper to bumper on congested Straßen. Not good for Berliners’ mood and Kreislauf, nor the city’s air quality. On pretty much any given day, the Common Air Quality Index, which ranks the air quality in European cities, shows that Berlin is among the top most air-polluted capitals (yes, worse than London or Paris). The main pollutants responsible for the poor results are nitrogen dioxide (NO2), a gas known to cause respiratory diseases and suspected to increase the risk of conditions such as diabetes, and particulate matter (PM10), which the German Environment Agency (Umweltbundesamt) says can cause deadly respiratory conditions in children under five as well as lung and heart diseases, including cancer, in adults. And surprise, surprise – the culprit is traffic. Cars.

The pollution as currently measured in 29 of the city’s busiest streets is routinely exceeding the prescribed “healthy” maximum.

Especially diesel-powered engines, which are favoured by every fourth Berlin car-owner, and account for as much as 87.7 percent of NO2 emissions (see chart right). In the last five years, diesels in Berlin have increased by over 43,000. No wonder the city was sued by the EU for violating EU regulations on air pollution last May. And it wasn’t the only court case – last year, Deutsche Umwelthilfe activists successfully sued Berlin for failing to meet the EU-wide standards of an annual average 40mg of NO2 per m³ (Berlin is at an annual average of over 60mg per m³ on particularily busy streets), a limit set in 2000, following the World Health Organisation’s recommendations. “We’ve known for 20 years that we’re overstepping the limits and we’ve also known where that’s coming from,” says Wolfgang Frenzel, who has been a researcher in air quality at the TU since 1982. “But the city has been slow to react, and if Brussels hadn’t pushed for it, they wouldn’t have addressed the issue at all.”

The threat of EU proceedings against treaty-contravener Berlin, might have prompted Klaus Wowereit’s left-wing government to introduce the Umweltzone. The logic is simple: ban highly polluting old cars from driving within the confines of the S-Bahn ring, and you’ll have cleaner air. Only cars that meet at least the Euro 4 norm (there are six grades from 1 to 6), and have a green sticker on the windshield to prove it, are permitted in the inner city. Yet, despite a reduction of the PM10 after two years, NO2 pollution plateaued well over the EU limit. As Frenzel points out: “One reason for that is that car manufacturers have been cheating and not implementing the technical upgrades.” The next major step was taken in 2011, in the form of an ambitious so called “Clean Air Plan” or Luftreinhalteplan: a long, optimistic catalogue of measures to significantly cut NO2 emissions. Eight years on and the target has not been met: the pollution as currently measured in 29 of the city’s busiest streets is routinely exceeding the prescribed “healthy” maximum. Handed the job in late 2016, Berlin’s new Senator for Environment, Traffic and Climate Protection, Regine Günther was pressed to outline her own “Clean Air Plan” follow-up, a first draft of which was published last month.

So, what’s the plan, Frau Günther?

Expectations were high: a progressive, climate-concerned Left-Green government was finally given full command over our Berliner Luft and its environment minister was showing unusual outspokenness in professing her bold vision for Berliners’ future. “We want people to get rid of their cars,” Günther said at a CDU event in early March. “The combustion engine is outdated and will very quickly be replaced,” she added, crediting electric mobility as a sustainable alternative.

Reducing the number of cars with combustion engines on the streets is a sure way to drastically improve air quality readings.

But Günther’s draft seems to be a far cry from the senator’s bold public declarations. No ground-breaking anti-car measures, but small steps, the most “radical” and widely reported one being a diesel ban in 15 street sections starting in June. Too bad that the selected sections add up to a mere 2.4km. Furthermore, it remains hard to imagine how the police will be able to implement the “spot checking” (sic) promised by Günther, without any watchful cameras or stickers around. In the best case scenario “people with diesel cars will just have to make a small detour to avoid it,” as Frenzel points out. The draft also proposes to bring the speed limit down from 50km/h to 30km/h in an additional 85 street sectors, adding up to just over 10km in total. But just how much difference this will make is questionable, especially considering 80 percent of Berlin streets are already set to 30km/h – and that hasn’t solved the problem. “Reducing the number of cars with combustion engines on the streets is a sure way to drastically improve air quality readings,” says Frenzel. So how come the government isn’t taking any decisive steps to phase cars – especially diesel – out of our cities’ breathing space altogether? For Tadzio Müller it’s got to do with courage in the face of both car-addicted voters and a powerful industry in bed with politicians: “There is this sexual, emotional worship of cars in Germany. They’re everywhere from the highest levels of the state to the lowest levels of our crotches,” says the climate activist who advocates a transition towards an “anti-car society”. But as shown by the French yellow vests movement, measures against diesel cars are not only unpopular, but they might even spark real social unrest – and no politician would want to risk that these days.

Still, there are other solutions for determined authorities to improve air quality: “Take London’s inner-city toll,” Frenzel says. “It makes it a lot less attractive for people to drive there. Or Stockholm’s flexible toll: they adjust it to the current air quality readings. When the NO2 concentration is high and you want to drive into the city and contribute even more, you pay accordingly.” Similarly, Paris regularly bans access to its inner city to high-polluting vehicles, as a preventative measure every time pollution peaks are forecasted, and, like Brussels, it has video monitoring to make sure its green label system is implemented. The French capital has also famously turned its high-traffic riverbanks into car-free zones. No such pedestrian plans in Berlin though, a city surprisingly lacking car-free zones. Additional measures, like investing in public transportation – possibly making it free – or expanding the cycling infrastructure, can make driving less attractive. Here, the city is at least making medium-term commitments: a new 385-page public transport plan (Nahverkehrsplan 2019-2023) states that €28 billion will be put towards expanding S-Bahn and U-Bahn services (by extending lines and adding more trains) and exchanging all BVG buses with electric-powered ones – goals to be realised by 2030-2035. No signs of bringing down ticket prices though! “All these measures we are now discussing could have been implemented decades ago. But it takes political will, and that’s sometimes lacking,” says Frenzel. Whether the will is now there and strong enough to finally get the pollution levels below the limits deemed safe by the World Health Organisation remains to be seen. 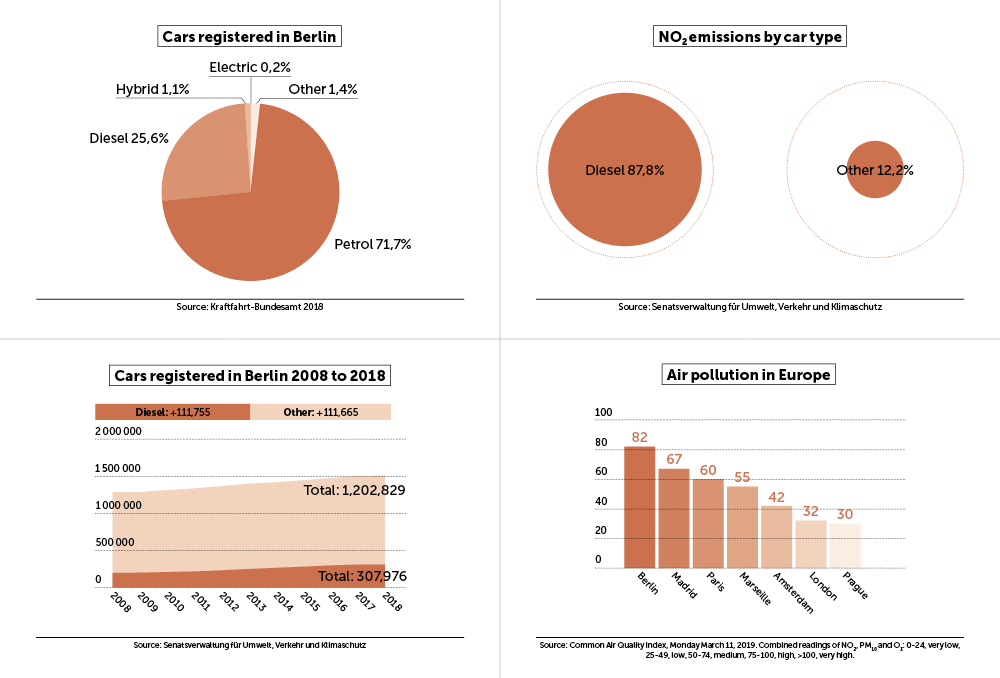