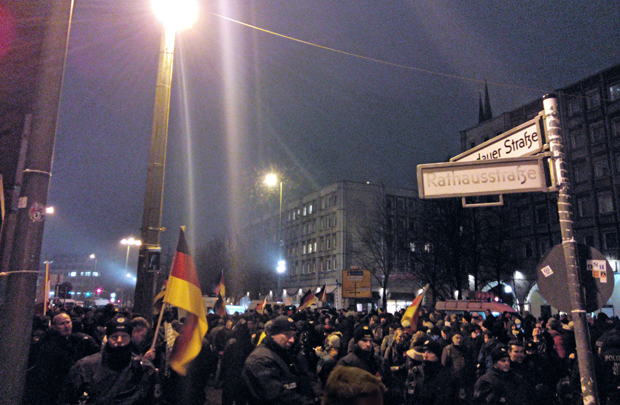 Monday’s demonstration by “Bärgida”, the Berlin chapter of anti-Islamisation group PEGIDA (Patriotic Europeans Against the Islamisation of the West), was attended by some 500 protesters, along with 800 police and 5000 counter-demonstrators. Jean-Michel Hauteville set out to find out what it was like on the inside.

“Excuse me, is this the way to the Bärgida demonstration?” I ask the policeman guarding a quiet rear entrance to the fenced off perimeter behind the Berlin city hall. He gives me a bemused look and nods. “Danke,” I say as I saunter past him, trying hard to look relaxed and confident and not at all like an undercover journalist. Actually, I feel most grateful towards him for not holding me up with awkward questions. I mean, I’m black and I want to join a xenophobic demonstration.

I turn a corner and there they are, the Berliner patriots, waving German and Berlin flags alike in the unrelenting drizzle. There are just a few hundred of them on the Spandauer Straße side of the City Hall, surrounded – and vastly outnumbered – by policemen with and without riot gear. The police aptly separate the Bärgida protesters from the far-more-numerous left-leaning counter-demonstrators, booing and jeering loudly on the other side of the barriers.

The adrenaline kick of having made it this far doesn’t last long. My heart sinks as I look around me: people are chatting in twos and threes, whereas I just stand there, alone and wet, feeling thoroughly awkward and silly. As I pace through the crowd, I overhear two middle-aged men deep in conversation. “Actually, we don’t have that many problems with immigrants. Most of them do integrate pretty well, eventually. Even black Africans. The only ones that don’t integrate at all are the Muslim lot,” one says with surprising polite, erudite tones. His interlocutor agrees. As their cordial discussion on how terrible Muslims are goes on, they hardly sound like knuckle-dragging right-wing extremists.

A few sideways glances and raised eyebrows acknowledge my dark skin, until a blonde woman in her thirties holding a large German flag looks straight at me and laughs. I respond with a feeble smile. She comes over to me, looking positively delighted.

“So you must be a black Nazi, right?” She laughs at her own sarcasm.

“Are you a Christian?”

I tell her about my Catholic upbringing in the Caribbean and subsequent move to the French capital.

“Sad but true, France is in trouble,” she says mournfully. “At least you’re lucky, you’ve got Marine Le Pen and she’s gonna change things. I really like her. Hey, do you want a candle?”

Moments later, we’re both holding candles and instantly become a lot more conspicuous. A man in his forties pops up, looking thrilled. “How brilliant to have you here with us! We should show you to the red rabble over there. A black guy supporting PEGIDA: what would they make of that?” he beams at me, with an unmistakeable working-class Berlin dialect. I mumble some words of approval with a heavy French accent and register his army jacket with an embroidered Confederate flag on the front pocket.

It’s not just the PEGIDA supporters who notice the black guy and the blonde woman holding candles – journalists now circle warily around us. One or two venture a few questions. “Why are you here tonight? Could you please tell us?” I feel paralysed. In Dresden, an undercover RTL reporter was interviewed by fellow journalists who were unaware that he was secretly investigating among the crowd. Showing poor judgment, he answered with a few xenophobic utterances and the whole thing backfired. Luckily, my blonde guardian angel drags me away right then. “They’re the press. Ignore them! Let’s go! We won’t talk to you, Lügenpresse!” And off we go before I make a fool of myself.

Soon the Bärgida crowd starts chanting. “Protect all minorities, including Nazis!” my new black-loving, Muslim-hating, Confederate-sympathising East German friend suddenly bellows. An older man proudly displays his homemade banner denouncing “Islamisirung” with an embarrassing spelling mistake on the key word. Other protesters, though, did get their spelling right and have come up with pretty creative ways of expressing their frustration. “I am for EVERYONE’S right to demonstrate. Does that make me a Nazi?” one placard reads. Another demonstrator nearby carries a sign pleading: “I want pork on my garden grill. Does that make me a Nazi?”

As I spend more time with the small Berlin offshoot of the PEGIDA movement, it becomes obvious how disparate the crowd actually is. A fearsome looking giant with a spiderweb tattoo at the back of his shiny, shaved head, scowls at my brown face a couple of times. I do hear the word Volksverräter (“traitors of the people”) buzzing around my ears once in a while. But Mr. Spiderweb Tattoo and the few others sporting the typical neo-Nazi thug look are just a minority among a 500-strong crowd of very average-looking Berliners, young and old. One openly gay demonstrator waves a rainbow flag in protest of what he sees as Islam’s rampant homophobia.

The one other dark-skinned person I encounter among the protesters is a tiny 60-something woman holding a Israeli flag. “Where are you from?” I ask. “Berlin-Charlottenburg! I come from a Christian-Jewish family. I love Germany! I stand behind these people. There are more and more burkas on the streets, even in Charlottenburg. It’s so misogynous!” She waves towards the screaming anti-Bärgida protesters on the other side of the barricade: “And we need to protect Germany from those people!”

For a few minutes my blonde Christian “friend” has a heated argument with a couple of pierced teenagers on whether we should have sympathy for the Palestinians or not. “Are you kidding me? They’re just Jordanians, Arabs, whatever. They’re no better than the whole Muslim lot,” she blurts out. In the background, the other demonstrators start chanting “Wir sind das Volk” yet again. “Come,” she says, let’s be united and stop arguing. We are the people after all!” And she joins in the chanting.

After three hours of demonstrating in the rain and sympathetically nodding at the craziest conspiracy theories (“I’m sure Merkel is a closet Muslim convert”), I feel cold, hungry and confused. The police escort us to the Alexanderplatz U-Bahn station so that we avoid getting beaten up by the counter-demonstrators, who still outnumber us 10 to one. As I part ways with the blonde woman, she invites me to a flash mob to be held on Saturday and asks me for my Facebook details to keep in touch.

“I hope I’ll see you next Monday at the demonstration!” she exclaims. I give her a wave and get on the train. It’s time to go home.