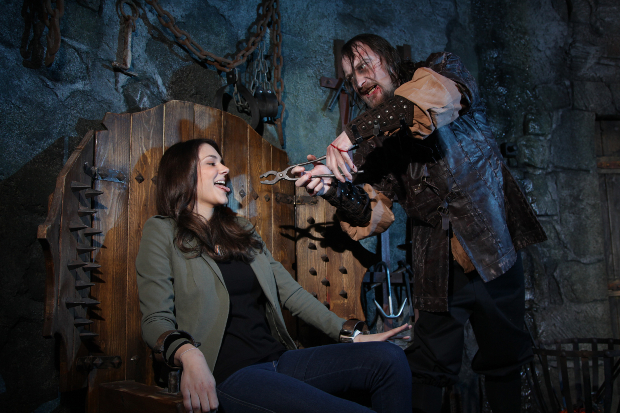 Step right up, ladies and gentlemen, and witness Berlin’s terrifying past from the Middle Ages until 1921 – after which, presumably, life in the German capital was nothing but beer and skittles.

Part of a Gothic horror-porn franchise started in London, the Berlin Dungeon attempts to bring that same grisly medieval aesthetic to the city where ex-Stasi members pass you on the street every morning and a real concentration camp is only an S-Bahn ride away.

Over the course of an hour, you’re led through a series of damp, smelly rooms in which recent Ernst Busch acting school grads in rags and pancake makeup scream and flail their arms at you, when they’re not delivering ‘edutainment’ monologues (in German or English) that fail to fulfil either part of the portmanteau.

There’s a plague-infested morgue, a torture chamber from the 30 Years’ War and the apartment of Georg Karl Grossman, a serial killer who made his victims’ flesh into Wurst. Will you be scared? Depends on how susceptible you are to lights flickering on and off at random intervals, plastic seats with moving parts that poke you in the bum (hey, beats one of those €2 chair massages or sitting on Rainer Brüderle’s lap) and fake viscera that might’ve been cobbled together from Modulor materials.

The knowledge that mass death, sham trials, sadistic medical experimentation and ‘enhanced interrogation’ aren’t quite as far back in Berlin history as the Dungeon suggests does add some frisson to the experience. More than anything, though, this is more evidence that Berlin is becoming a ‘proper’ global metropolis, attractive enough for international tourism franchises. For some real torture, wait until May and head over to the world’s first Barbie Dreamhouse Experience in a temporary building next to Alexa.