Single, female and ready to start making money off of it? Try Ohlala, the Berlin dating app where men pay for the pleasure of your company. 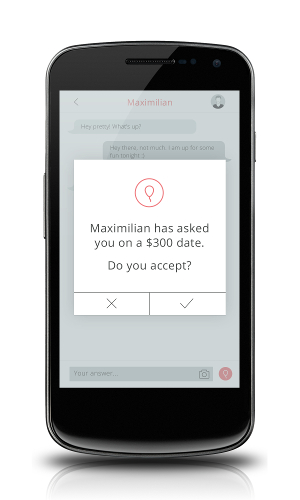 When you read about statistics for single women dating in Berlin, they’re often pretty sobering. In our own survey of the scene, 2014’s “Loveless In Berlin”, we found that there were nearly 60,000 more women in this city than men. And if you’re lucky enough to score a date, you’ll probably have to pay at least 50 percent of the bill. But wait: what if there were an app where you were not only practically guaranteed a date, but paid to show up? Welcome to the revolutionary world of Ohlala. CEO Pia Poppenreiter describes her company as “a Berliner start-up that’s very rebellious and that’s trying something new.”

You’d be forgiven for thinking “something new” was a mere escort service – like, say, Poppenreiter’s last venture, Peppr, which connects prostitutes and johns. But she says Ohlala was actually born out of her own frustrating experiences with digital dating. “Before my relationship I used other dating apps and I found every encounter super-inefficient. There was that dating app phenomenon of a guy ‘ghosting’ – so you finally match and then you write a message and then that other person goes offline for a week, and then you’re just missing out on each other and then you’re not in the mood for a date.“

Making sure suitors have a financial stake in things, claims Poppenreiter, is the key to a ghostfree dating life. And a profitable start-up: this summer, Ohlala will implement an in-app payment system that will allow them to take a cut of the date’s cost. Poppenreiter argues this is in the users’ interest: “We’ve built a business model around making offline encounters happen. And that’s very different from other apps, which monetise via keeping the community online. They’ve got features like, ‘pay more, get more messages’, and we don’t do this.” So far, she’s received glowing reviews from female friends who have used the app. She explains that they like it because “it’s straightforward, and the date actually takes place. And that’s a cool thing.” We’d wager the extra cash in hand doesn’t hurt, either.