Social distancing, isolation, quarantine – in a way it’s never been so hard to actually meet new people, romantic and sexual interests included. Luckily, in our digital age, it’s not only work that can be organised remotely, and dating apps are getting more traffic than ever. But is a virtual date the same?

“I was a little sceptical at first but I thought why not give it a try,” says Kate, a 33-year-old marketing manager originally from London. “I mean, just look at the perks. You only have to dress up from waist up – so I washed my hair and put on a bra for the first time in weeks, no need to shave! And you can quit the video chat any time without having to find awkward excuses!”

Kate has been on and off Tinder, OkCupid and Bumble for years, with no serious relationships to report. When lockdown came around, she was worried. “A girl’s gotta eat after all! But I got into this online game pretty fast. I get to chat to guys all over the world. I’ve been doing video calls with two of them, one from Berlin, one from Cape town. Who knows, maybe this will be the key to finding a good guy? At least I don’t sleep with them too soon,” she laughs. “I did have a brief sexual experience with one of the guys online, though! The other night, we were chatting, both drinking in the comfort of our own bedrooms and he started telling me what he’d do if we were actually in the same bedroom.”

The other night, we were chatting, both drinking in the comfort of our own bedrooms and he started telling me what he’d do if we were actually in the same bedroom…”

Kate, who isn’t normally the verbal type when it comes to sex, was intrigued, and the alcohol helped overcome the awkwardness. “It really turned me on. Then, when I tried to play along, it was quite embarrassing at first and I couldn’t stop giggling, but eventually I got the hang of it and it was a great experience! He asked me whether we could show some body parts as well but I wasn’t into that, so we just talked and were both touching ourselves. Afterwards we had a little more wine and said goodnight. That was three days ago. I wonder if we’ll do it again?”

For some, the Covid-19 threat has meant strict self-confinment and loneliness. That was Daniel’s motivation to start using dating apps. With a compromised immune system and severe asthma, the 30-year-old Hungarian works from home and gets his groceries delivered to his doorstep. His balcony is the only ‘outside’ place he goes. “I really am concerned about the virus and what it would mean for me to get sick, so I choose not to risk it at all,” he says. “I haven’t left the house for five weeks now and it’s really fucking lonely, I have to admit.” 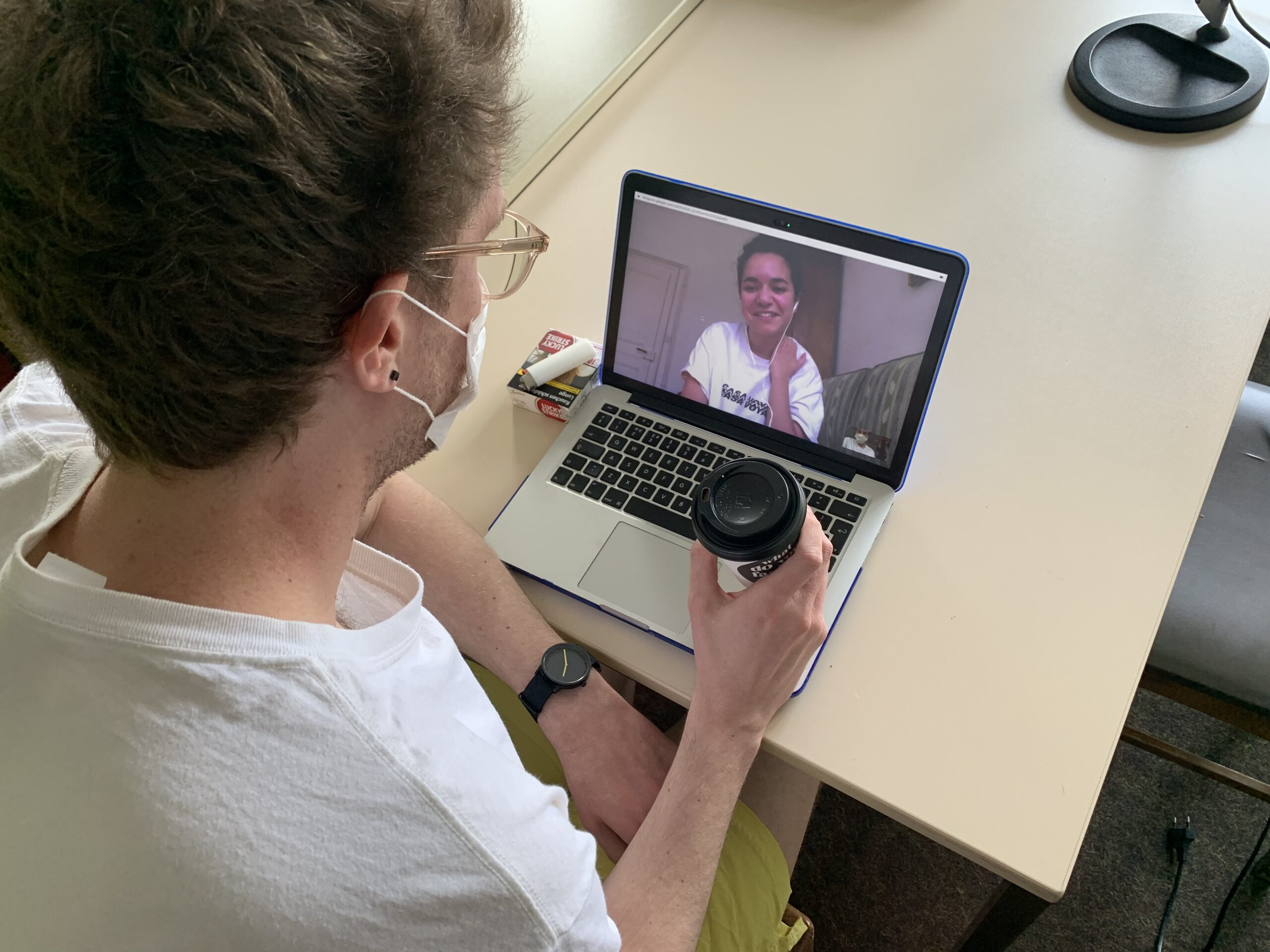 He’d been seeing a few girls here and there, but with long working hours and little free time, dating wasn’t a priority for him pre-Corona. These days, however, Daniel says he spends an average of seven hours per day chatting with Tinder matches from across the world. For now, he’s giving everyone willing to talk a shot, and is open to seeing where things might go. With some, he only spoke to them once. With others, there’s more regular contact. He even ended up at a virtual ‘gathering’ on the Houseparty app. “I’ve been talking to this French girl quite a lot over the past three weeks, and one night she told me to join this app and a party her friend was hosting there. I thought, ‘Why not?’ I ended up seeing seven other people on my screen, listening to them speaking French and listening to shitty music. It was almost like being at a real house party,” he jokes. “I ended up playing around with this app and even found some guys I know at other ‘parties’!”

I’ve been talking to this French girl quite a lot over the past three weeks, and one night she told me to join this app and a party her friend was hosting there.

In the end, Daniel was up chatting with strangers and old acquaintances until 3am while getting pleasantly tipsy at home. “In any other situation, I would have thought myself pathetic, but desperate times, you know…”

Alexandra had met a girl a week before the lockdown. After one date that ended with a goodnight kiss, they agreed to meet again. But the blooming romance was cut short by the measures to slow the virus’ spread. “I was so angry!” she says. “After such a long time, I’d finally found a girl on Tinder who wasn’t just experimenting, knew what she wanted – we really hit it off on an emotional level. Now it’s very last century in a digital form: we are chatting and doing video calls, which is good on one hand because we are really getting to know each other.”

As a professional dancer, Alexandra has lost all of her work and income, so has plenty of time to learn new things she might be able to try once the lockdown is over. She did contemplate asking her real-life crush to join her in isolation but decided against it, fearing it would be too much too soon: “I have two flatmates, it’s already enough for me to deal with them. At least I have a bedroom I can retire to when I need some peace!”

One of Alexandra’s friends, David, from Toronto, on the other hand went for it and looked for a quarantine partner. “I live alone in Spandau, rather far from everyone else I know,” he says. “I thought it would be nicer to find a girl to spend all this time with.”

Some girls looked at it as a free housing opportunity, it was hilarious. I didn’t realise the Berlin housing market was really that bad!

At first he posted on Facebook to see whether any friends were in the same position, but there were no takers – “Only one guy but I wasn’t just looking for a roommate, you know.” David then updated his Tinder profile, offering to share his space with someone and his inbox was soon blowing up. “Some girls looked at it as a free housing opportunity, it was hilarious. I didn’t realise the Berlin housing market was really that bad! Anyway, I ended up talking to several girls who I thought to be good candidates and in the end it was down to two.”

He actually arranged the move with one of them, a seemingly laid-back cutie with the desperate wish to get away from her flatmate. She quickly packed her stuff and headed out to Spandau. “Well, that lasted 10 days,” David laughs. “She turned out to be a control freak who wanted to rearrange my apartment and acted needy and whiny from day two on, so I told her this was not I was looking for…” Now that she is gone, David is isolating for two weeks to make sure he’s all clear Corona-wise. But he’s keen to give it another try: “I’m already chatting with some girls but I’ll be more careful this time around!” In the end it looks like, lockdown or not, daters will be daters…