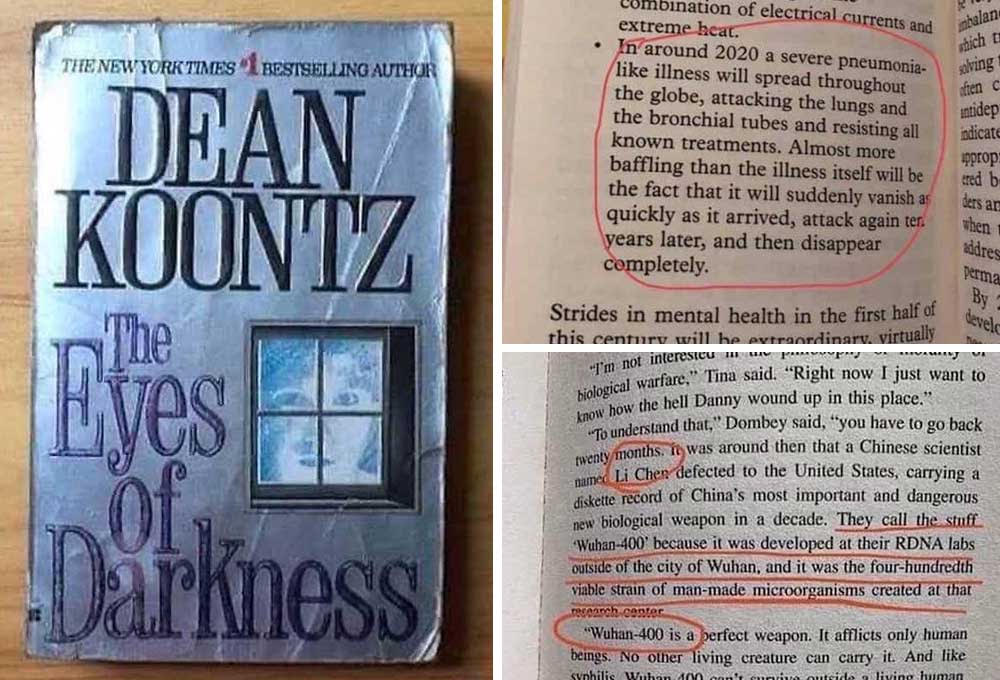 Apparently coronavirus was prophesied 39 years ago – with chilling accuracy we must admit! In his best-selling novel The Eyes of Darkness, Dean Koontz wrote in 1981: “In around 2020 a severe pneumonia-like illness will spread throughout the globe, attacking the lungs and the bronchial tubes and resisting all known treatments.” Enough of a spooky coincidence, but there’s more! When describing the origin of the outbreak, Koontz explains that a Chinese scientist defected to the US with a new dangerous biological weapon called “Wuhan-400 because it was developed at their RDNA labs outside the city of Wuhan, and it was the four-hundredth viable strain of man-made microorganisms created at that research centre”. Even the skeptical are chiming in on this one. Of course, the idea that Coronavirus is a biological weapon that somehow got loose has been widely debunked (it originated in a market), but we’re all suckers for a dramatic tale. However, if Koontz’s story is anything to go by, the end is a hopeful one: “Almost more baffling than the illness itself will be the fact that it will suddenly vanish as quickly as it arrived, attack again ten years later, and then disappear completely.” Lit fic, or a disturbing omen of the dystopian reality we’re now experiencing? One thing’s for sure, we predict Koontz will see a resurgence in book sales.

More Wuhan: It’s in the 5G-waves

Wuhan has the new 5G. The virus started in Wuhan. So, “what if the deaths weren’t a virus, but a cell breakdown caused by 5G that mimics the effects of a virus?” At least, that’s what the website Connectiv Events stated in an article on January 27 so far shared 2600 times. As Germany is currently implementing 5G, conspiracy theorists suggest the virus is the perfect cover for the “harmful” effects of 5G waves on health. Except that tests for 5G in Germany actually started in 2019 already, like in many other European countries. The website also declares confidently that “exposure to 5G waves causes flu-like symptoms”. Well, not so, according to an international commission mandated by the World Health Organisation, which says instead that none of the studies on 5G exposure show “any conclusive evidence of adverse health effects”. But what do they know?

A tried way to expose the culprit is to ask: who benefits from the crime? With cinemas shutting down all around the world and all new releases indefinitely postponed, countless conspiracies are circling about the benefits streaming juggernaut Netflix is expected to reap from social distancing and self-confinement. What if one of the biggest players on the online entertainment stage was secretly in the know? Variety did report at the end of February that Netflix’s share price has risen 0.8 percent while the global stock markets dropped. As if that wasn’t enough to make you consider fashioning a tinfoil hat, their new docuseries is out and coincides with the outbreak of COVID-19. It’s called Pandemic: How To Prevent An Outbreak. It’s about how prepared we are to deal with new pandemics. Eerily coincidental, nein?

Another conspiracy theory making the rounds is that the disease was planned for profit and that Bill Gates is pulling the strings. The origins of this theory can be traced back to pro-Trump QAnon YouTuber and professional troll Jordan Sather, who tweeted a link to a 2015 coronavirus patent by Pirbright Institute in the UK. The patent was about the development of a vaccine for a specific type of avian coronavirus found in chickens. Sather subsequently linked former Microsoft CEO and frequent QAnon target Bill Gates to the virus, arguing that the Gates Foundation funded the 2015 patent and engineered a global pandemic for personal profit. His proof? Gates gave a presentation at Massachusetts Medical Society and New England Journal of Medicine event in 2018, in which he discussed how the global health community would be unequipped if faced with a global outbreak similar to the 1918 flu pandemic. Sather asked: “Was the release of this disease planned?”

And the loser is… Corona beer!

It’s tough times for the unfortunately named Mexican pale ale. Google reports a surge in searches for “beer virus” and “Corona beer virus” supposedly indicating a causal connection between the two in people’s minds. Google Trends, which monitors Googlers’ search behaviour, lists in the top related searches to Corona beer, “Corona beer coronavirus” and similar combinations. A recent survey by CBS news also reported that 38 percent of US beer drinkers who responded wouldn’t buy the beverage ‘’under any circumstances’’ while 14 percent stated they wouldn’t order it in a public place. Meanwhile the alcohol’s stock price had plummeted to an all time low in mid March…  Actually, now might be a good time to get shares!