– Reinickendorf medical officer Patrick Larscheid warned that the official count of infections is potentially misleading because only 2000 tests are done in Berlin every day. He fears a much greater number of unreported cases.

– The new Corona hospital at Westend’s Messe is now supposed to open in “April/May”, Health Senator Kalayci said. Initially it was supposed to be up and running within three weeks, i.e. in early April.

– The application process for financial aid has been chaotic over the weekend. As tens of thousands of hopeful freelancers and small companies wait for immediate help, the city-owned investment bank IBB has reported cyberattacks on their site and also had to apologise for mixing up personal data of applicants. Meanwhile, the application process for zero interest loans for businesses has been halted because the budget is already maxed out. The Senat promised to look into increasing the budget to €1 billion.

– Six Corona patients from Alsatia at the French-German border have been admitted to the Charité hospital on Sunday.

– On Monday, a city parliament committee will be discussing stricter rules for visits to public parks (a limit of how many minutes people can sit on benches?). Stay tuned.

A recap of the news from Friday:

The latest count of confirmed Berlin Corona infections is 2152, including 1156 men, 991 women and five people whose gender is not known. The overall count is up 11 percent from yesterday (Thursday). Of those infected, 261 are treated in hospitals, 53 in intensive care. The death toll remains stable at eight casualties.

Starting today, freelancers, self-employed and small businesses were supposed to be able to apply for financial aid through the city-owned investment bank IBB. However, their servers collapsed this afternoon due to more than 20,000 people trying to get Corona grants at the same time. Only a few hours later, the number of queueing applicants reached well over 100,000. Meanwhile, small companies are still struggling to file their applications for loans – also subjected to the queueing system since last night. At time of press, business owners were facing a backlog of 20,000 applicants. When their turns come, they’ll be sent an email and given a 10 minute window to file their application into the system – at any point of the day or night!

While experts agree that more testing would be the best way to limit the spreading of coronavirus, the Tagesspiegel reports a shortage in lab capacities in Berlin. The Spandau testing centre told the daily that they had received 2360 requests over the past week, but can only provide 250 tests per day. The latest official number regarding testing in Berlin is two weeks old, when it was reported that 2000 tests per day could be analysed.

The Federal Environment Ministry has urged Berliners that those households in quarantine should only put very well-packed waste into garbage cans. For those who have suspected cases, waste should be packed into sturdy bags that are as tear-resistant as possible. These households are also temporarily exempt from the obligation to separate waste.

The Senat reminded Berliners this afternoon of the existing Corona bans and reaffirmed that neither picnics, barbeques or lingering in green spaces in the capital are allowed. Anticipating good weather over the weekend they reiterated that people can take walks or do sports only with one other person or those in their households and reminded everyone to maintain a distance of 1.5 meters apart from others. 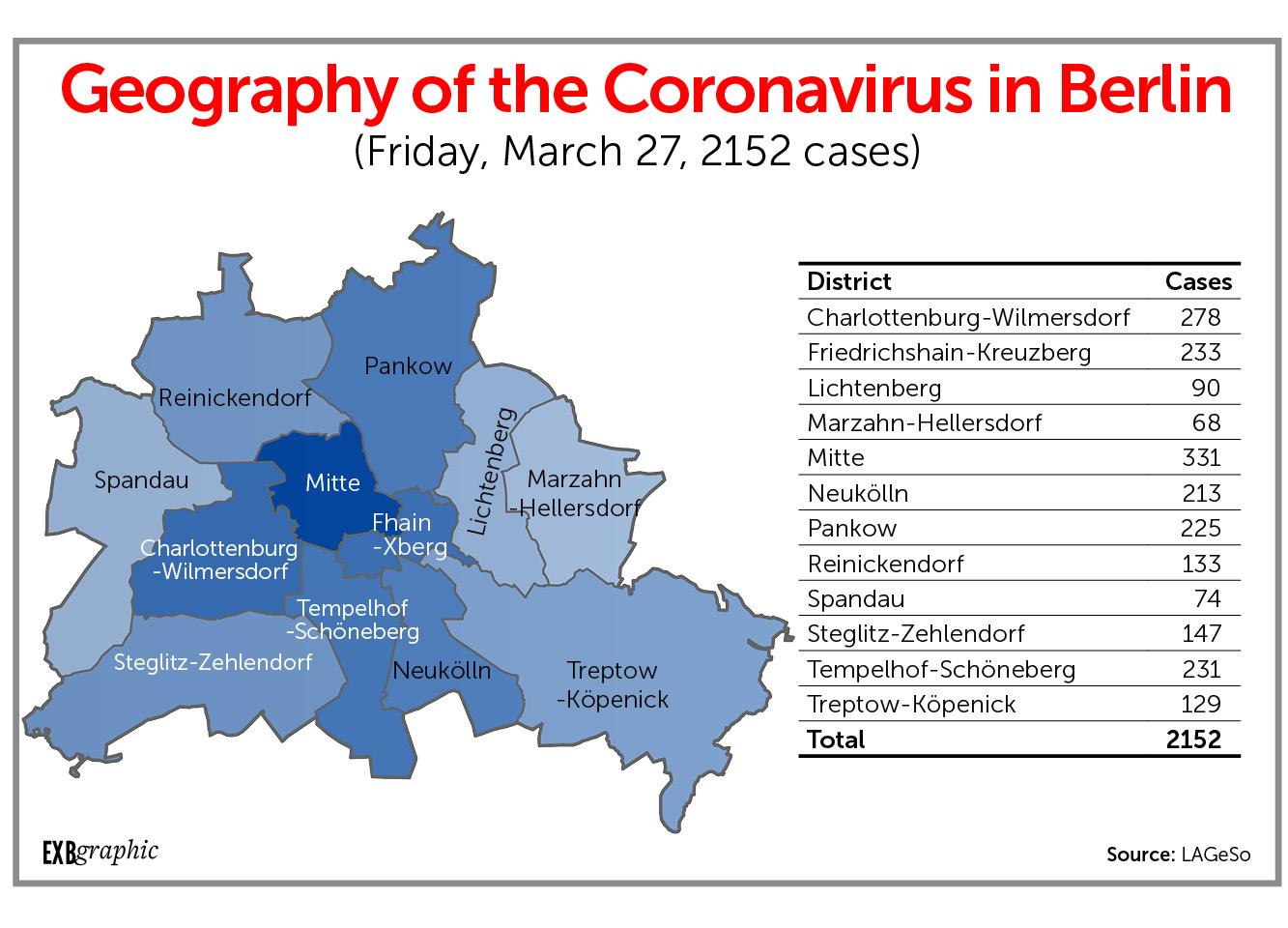 The State Parents’ Committee (LEA) has called on the Senat to ensure comparable education for all students during the coronavirus epidemic. They ask for the online platform ‘Lernraum Berlin’ to be better equipped so that students who lack laptops or a fast internet connection, do not face disadvantages. The LEA is asking for more concrete plans for virtual schooling as well as an advisory hotline.

Creative precedent: A tenant in Mitte has found his stay in his apartment extended until June, although he was previously sentenced to vacate on March 31, Morgenpost reports. The court extended his tenancy premised on his argument that the Corona crisis had left it almost impossible to find alternative accommodation in the current climate. It is now expected there will be no evictions until after June 30.

The Green party think more protection of tenants will be necessary in order to prevent homelessness following the Corona emergency. According to the Tagesspiegel, MP Lisa Paus called for a round table to discuss waiving rents. So far, a federal law has been passed that bans the termination of contracts in cases of rent arrears until the end of June. But as it stands, the outstanding rent would have to be paid back within two years.

Bread is selling like hot cakes these days, while cake sales have gone down, the DPA reports. Some people were buying up to 10kg of bread to freeze, the press agency was told by the head of the local bakers’ association, who also said he was not at all expecting a shortage. The overall revenues for bakeries has gone down due to the ban on sit-down café areas and decreased interest in cake.

On parts Kreuzberg’s Hallesches Ufer (north of Hochbahnstr.) and Zossener Straße, car lanes have been reduced or slimmed down to make way for wider bike lanes. The district argues that cyclists, too, must be given the opportunity to observe the required 1.5m safety distance. The Bezirk FDP and CDU have criticised the Green district mayor for the “provocation”.

Breaking news from Tagesspiegel: the Zoo population is bored. A spokesperson said especially the monkeys miss the opportunity to observe the human visitors. While the missing revenues are hitting both the Zoo and the Tierpark, another possible Corona side-effect could be an animal baby boom. Apparently the bird house is already seeing some spring time action. 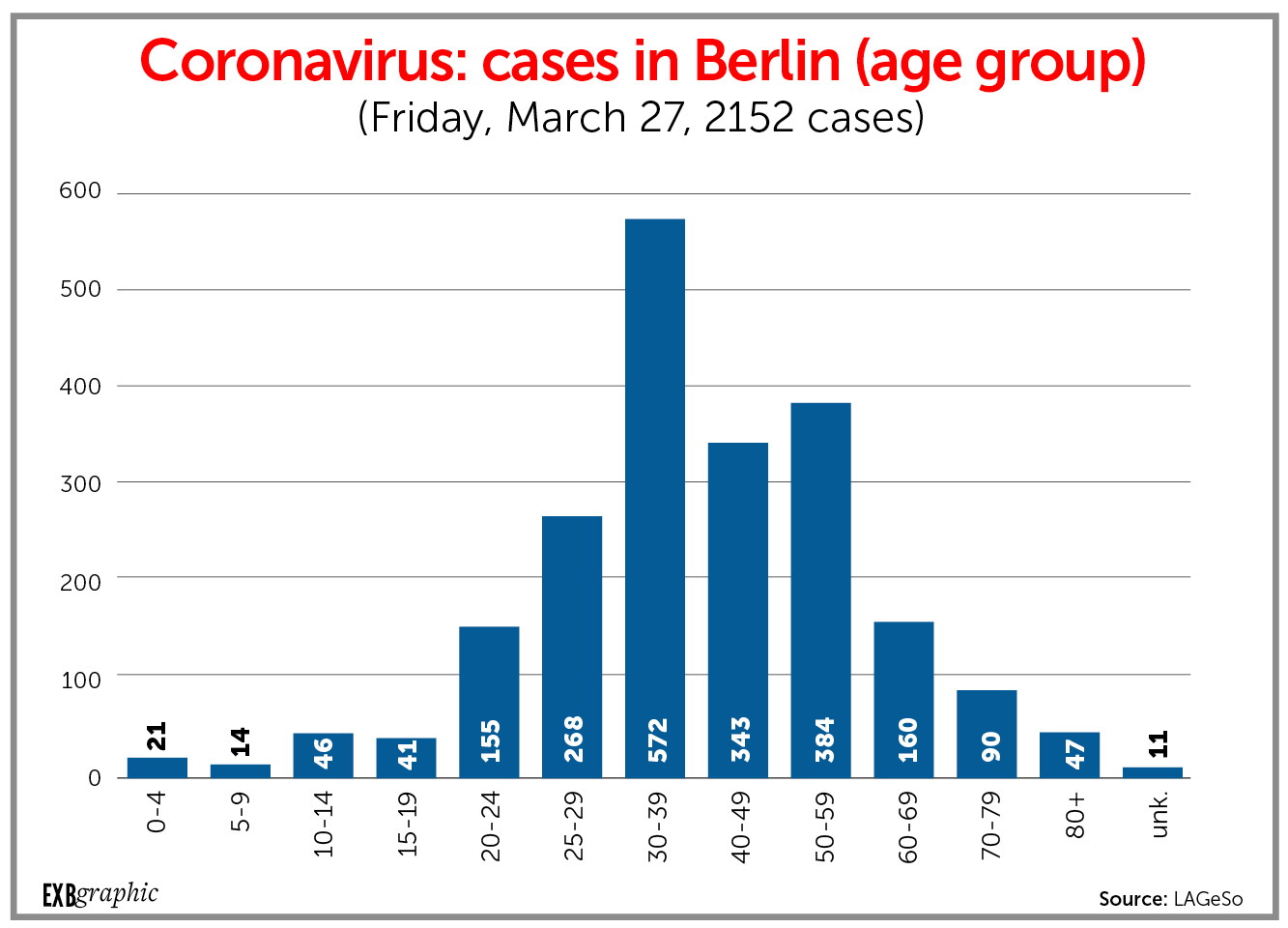 The Senat and several trade associations have set up a hotline aimed at companies to release protective equipment from depots to be donated to hospitals, medical practices and other key workers. Gloves, disinfectants, respirators, protective goggles and disposable towels were also needed. Companies can register donations from Monday to Friday between 8am and 4pm at 030 4664 6161 61.

Berlins Technische Universität wants to help produce spare parts for medical equipment and protective gear in the mathematical faculty’s 3D printing lab. The scientists have formed a network with the 3D print association and other institutions and businesses. They are hoping to expand the cooperation nation-wide to be able to produce relevant amounts of whatever parts are needed at the time.

Hotels show gratitude: The Bristol Hotel on Kurfurstendamm is offering coffee to police, firefighters and paramedics as a thank you in their efforts during the Corona crisis. The Adlon has pledged to donate 1000 overnight stays to the city’s heroes for when Corona is behind us. Medical professionals working to manage the health crisis can already book their free stay for later this or early next year.