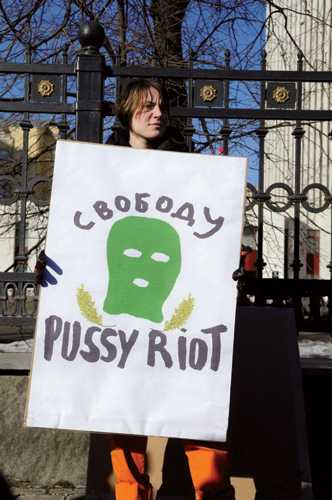 The Spiegel article dated February 20 begins in an apparently harmless way. “In Russia,” write Moscow correspondents Benjamin Bidder and Matthias Schepp, “female prisoners who spy on their fellow inmates are referred to as Nassjedka, or mother hens. They badger their victims until they confess, give away secrets or betray their accomplices. In return, the informers hope for an early release…” The logic that follows is less harmless and reads like a syllogism built on skewed premises and unsubstantiated information: 1) Yekaterina Samutsevich’s cellmate Irina Orlova was one such “mother hen” (no source or evidence provided); 2) Samutsevich was released (a fact); 3) Therefore, Samutsevich is a traitor (really?).

The story goes that 50-year-old Orlova “charmed” the pussy, her junior by 20 years. proof of that is that she “combed the activist’s hair” and “prepared food for her”. Another clue is that Samutsevich, a lesbian and hence “the weakest of the three women,” naturally feared Russia’s homophobic labour camps – or so construed unnamed “investigators”.

But the centrepiece of evidence is a set of confidential “documents which Spiegel has seen”, mostly letters exchanged by the Pussies while in pre-trial detention in which they state their daily doubts and very vague concerns about Katya’s relationship to her cellmate and question her decision to choose a new defence lawyer. The article fails to explain who showed the letters to Der Spiegel’s correspondents.

The distressing answer, although shockingly unacknowledged by the Spiegel writers, is that this source was Samutsevich’s former lawyer Mark Feigin. The same man she sacked for doing a bad job defending her, who was caught attempting to trademark the “Pussy Riot” brand name for a company owned by his own wife without the knowledge of his clients, who even attempted to sell the rights to a Pussy Riot movie behind the group’s back. Since Samutsevich’s release, Feigin has been sharing confidential ‘letters’ with the media and spreading rumours of a betrayal.

In a place like Moscow, where paranoia and manipulation are so pervasive and multilayered that instant suspicion has become a national disease, one would expect professional journalists to use more critical distance – and check their sources. The Pussy Riot case has been waged by all parties as a global war of (dis)information, deception and manipulation, with the media too eager to feed on any titbit they are thrown.

In an ironic, almost absurd turn, the charges levelled by Der Spiegel at the Kremlin, i.e. how “from the very beginning, Russian intelligence agents tried (…) to play off the imprisoned activists against each other” as well as “how [Putin’s] spy state manipulates trials and controls public opinion”, should have informed their own journalism practice. How these writers and their editors failed to realise this is a mystery.