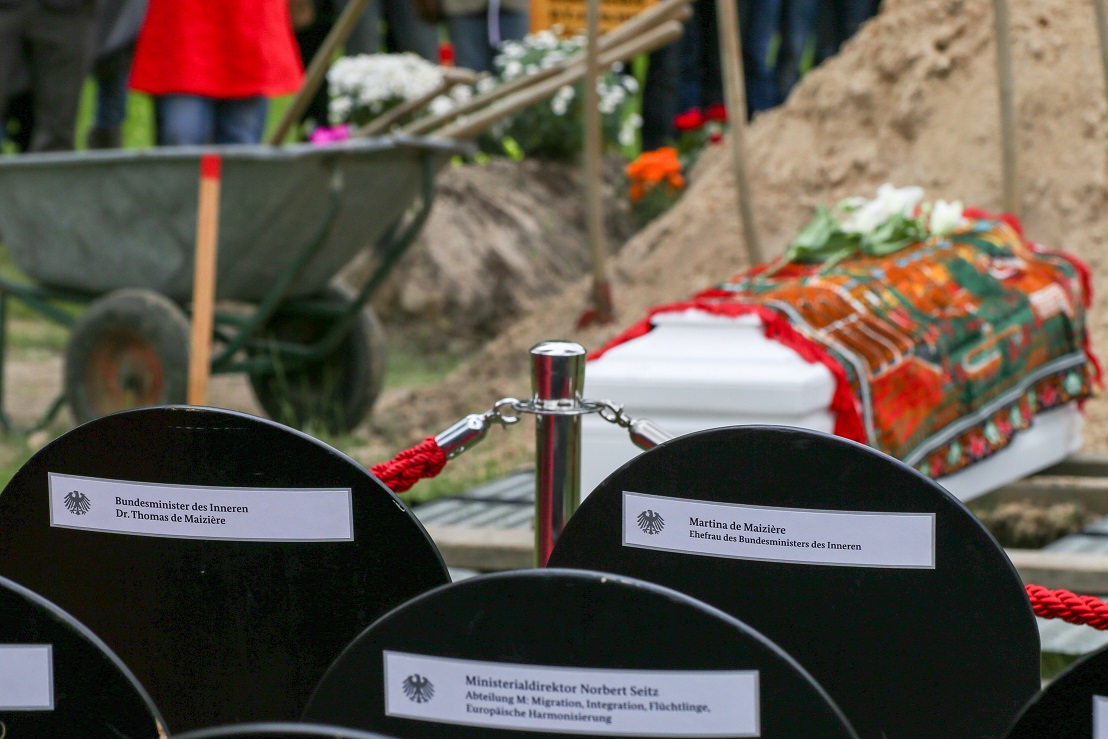 November 9, 2014: While Germany is celebrating 25 years since the fall of the Berlin Wall, two busses leave for Bulgaria. They are carrying “peaceful revolutionaries” with a simple point: The German state commemorates the Mauertote – the people who died at the Wall – but ignores the thousands of people dying every month trying to cross the “wall” into the EU. The activists had previously stolen white crosses from the government district to give to today’s Mauertote. They’re carrying bolt cutters and circular saws – but the activists can’t actually make it to the border fence because they are surrounded by police. They still call it the Fall of the European Wall.

Both of these actions were carried out by the Zentrum für politische Schönheit. Is this Germany’s answer to the Yes Men? Well it’s more professionally organised, in a typically German manner – and also more connected to the art scene. They’ve portrayed their civil disobedience as performance art, protected by the constitution. But that didn’t stop the police from arresting 91 people last Sunday!

Are these actions “tasteless”, as some commentators argue? Only to those who find it “tasteful” to see the bodies of dead refugees thrown into mass graves.

The “Center for Political Beauty” explained their philosophy in a talk: While Greenpeace will scale a building or ram a whaling ship, Amnesty International – the equivalent for human rights – limits itself to toothless petitions. The people from the Zentrum want Greenpeace-style direct actions – but for human beings.

The brilliant cross-stealing action last year set the bar high – how does the recent mass grave-digging stand up? Last November, the call went out for normal people to physically attack the borders. Now, they were addressing our rulers: Merkel is supposed to be confronted with the consequences of her “racist” policies.

The problem: Our rulers already know about the mass death in the Mediterranean. They can watch it in HD live stream via satellite. If we want to break down Fortress Europe, it’s not a question of moralising – we need a mass movement of refugees and their supporters.

In this sense, the Zentrum has reverted to Amnesty-style moralistic appeals – even if the aesthetic is much cooler. And the big problem is the absence of refugees. The activists here are middle-class white Germans. There is no lack of refugees in Berlin willing to fight, but at this action, they are only represented as corpses.

One more thing that bothers me: The Zentrum’s leader, Philipp Ruch, has repeatedly spoken out for military interventions to protect human rights in Bosnia or in Libya. But we saw how the NATO bombing of Libya created tens of thousands of new refugees (many of whom ended up in Berlin). And political parties like the German Greens, who supposedly wanted to defend the people of Libya with a military campaign, soon were trying to get rid of the refugees who ended up in Kreuzberg. Let’s hope the Zentrum can avoid the same hypocrisy by realising that these supposedly “humanitarian” military interventions just throw gasoline on the fire.