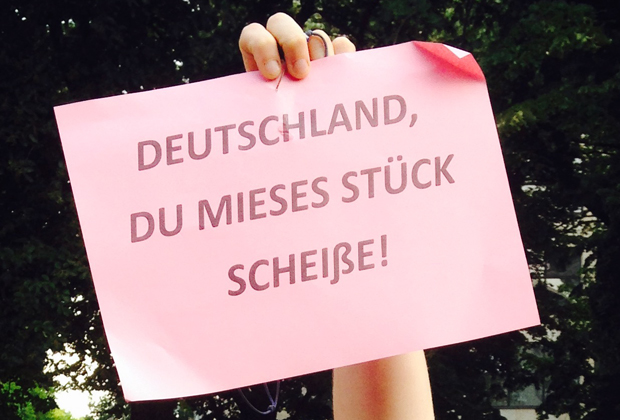 Wait! Before you write an angry comment about the title of this blog post, let me point out that it’s just a quote. I’m only writing about something that was said. That doesn’t mean I share the – admittedly profane – sentiment. Let me explain…

Last Friday, 2000 people demonstrated in Berlin to say “OXI” (that’s Greek for “NO”) to Angela Merkel and her program of austerity for Greece. (Springer’s right-wing propaganda machine claimed it was just 300, but lying is their job.) At Oranienplatz, a few people unpacked an absurdly long banner – like 20 meters long – saying: “Deutschland, du mieses Stück Scheiße!”

The police detained 21 people and the demonstration couldn’t start for two hours. Apparently, it is a crime to “insult or maliciously belittle the Federal Republic of Germany” – in fact, they can throw you in prison for up to three years! Fortunately, this law is never used, and there’s little chance that anyone will be charged, much less convicted, due to the banner. This was just a case of police harassment. People were able to get the slogan replaced at a local copy shop (see picture).

Do I agree with the banner? I definitely agree with their right to carry it. I practically grew up in the ACLU, so for me freedom of speech is all about the inalienable right to defecate on flags – even if it seems a bit crass.

But beyond the profanity: Is Deutschland nasty? For the last five years, politicians and the media in Germany have insisted on cutting pensions and slashing hospital budgets in Greece. It’s this kind of behaviour that reminds people of moustache-twisting villains from a Vaudeville play. That certainly qualifies for the word “mies” (nasty).

The “hard line” of Wolfgang Schäuble or Sigmar Gabriel reeks of hypocrisy, since Germany’s debts were cancelled several times over the course of the 20th century. In 1953, the Greek government co-signed a treaty eliminating a big part of the German debt. On top of that, Germany refuses to pay any significant reparations for the money stolen from Greece during the Second World War – at least €11 billion! I think this fulfills all the requirements to be called “Scheiße“.

So independent of the question of free speech, I think the people with the banner have a point. I’ve been accused of being too quick to make Nazi comparisons. However, in this case, it’s Springer’s Bild tabloid itself that is showing Merkel with a piked helmet and demanding an “Iron Chancellor” to rule over Europe. That, whatever your political views on the Greek debt crisis, can only be called a “nasty little piece of Scheiße“.

I’m not going to insult Deutschland (whatever you consider that to be). Some of my best friends are Germans. I genuinely liked most of the 2000 people demonstrating for “OXI” last Friday. After thinking about it, I like the slogan from the banner – but I’m still going to leave it in quote marks, because who wants to get arrested?