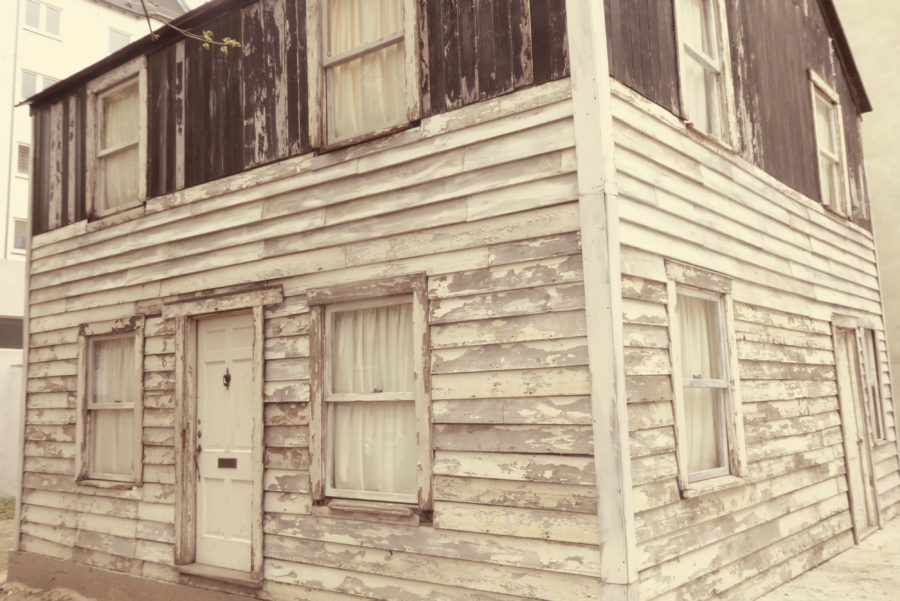 I visited with Rosa Parks over the weekend, in Detroit-Berlin.

Her house is modest. It’s made of weatherboarding: horizontal on the ground floor, vertical on the first. The paint is peeling, the doors are locked and the curtains are drawn.

This is the house in which Rosa Parks lived after she left Montgomery, Alabama, seeking refuge from the death threats that followed her iconic refusal to give up her bus seat to a white man in 1955. Her brother and his family lived in Detroit. She came and stayed from 1957-59.

In the wake of the 2008 housing crisis and amid efforts to clean up Detroit’s low-cost housing areas, Parks’ house in Detroit was threatened with demolition. Her niece Rhea McCauley bought it from the city for $500. When she learnt of Berlin-based American artist Ryan Mendoza’s transfer of a house from Detroit to Europe for the 2016 Art Rotterdam festival, she contacted Mendoza – who happened to be in Detroit – and gifted him her aunt’s house.

Dismantled, shipped and re-built by Mendoza at a personal cost of over $30,000, Parks’ temporary home stands temporarily in a Berlin backyard, close to the artist’s studio in the working-class district of Berlin-Wedding. Along with a sizable crowd, McCauley herself was there last weekend to visit with the memory of her aunt. She is a striking woman, confident and straight-backed, talking to representatives of the German press.

Behind her is the house that became an issue. An issue further complicated by the controversy surrounding the image “Open Casket” at this year’s Whitney Biennial. White artist Dana Schutz’s depiction of the disfigured body of Emmett Till, a 14-year-old black boy murdered (also in 1955) following accusations that he flirted with a white woman, was criticized for inappropriately exploiting a black person’s suffering.

Yes, this is different. Rhea McCauley asked for Mendoza’s cooperation and that changes everything. But Mendoza is no stranger to the adulteration of innocence. His photographic work plays with incongruities of purity and corruption. On one large, almost life-size photograph in Mendoza’s adjacent studio, a girl clad in virginal blue vomits a white stream of milky wholesomeness. The ‘other’ Detroit house that Mendoza re-formatted as an artwork and shipped to Rotterdam to represent his private search for a conflicted American identity was condemned by some as “ruin pornography”.

Saving this house, the house that others (including the mayor of Detroit) had assigned to the scrap yard, has become a mission. Talking to NPR, Mendoza says that, “The end goal is to find an institution that will buy it, so that Rhea McCauley’s Rosa Parks Family Foundation can finally get some money.”

A house is never just a house. It’s about inhabitants and the ideas that ferment in a given place. Roy Lichtenstein knew this when he created the optical illusion House I. Experimental filmmaker James Benning knew it when he made his 2011 film Two Cabins, streaming parallel views from cabins he had reconstructed based on those of Unabomber Ted Kaczynski and Henry Thoreau.

Like these cabins, the house in which Rosa Parks lived never was just a dwelling. Can it lay claim to the innocence of a simple idea: honour, remembrance, awareness?

It can. But despite its apparent homeliness, its clean structural lines and picturesque shabbiness, this house is not a comfort zone of political correctness. Behind its closed front door, contradictions sit slightly uneasily on the threshold between simple purpose and significant meaning, between opportunity and occasion, between art and activism.

Wisely perhaps, the physical rooms are closed to visitors. Only the exterior was viewable the weekend of March 8, and will be again over Berlin’s gallery weekend.

Until such time as it finds a more permanent home (and probably well beyond such time) Rosa Parks’ house in Detroit-Berlin-? remains above all one thing: a place of profound and provocative questions. Cui bono?