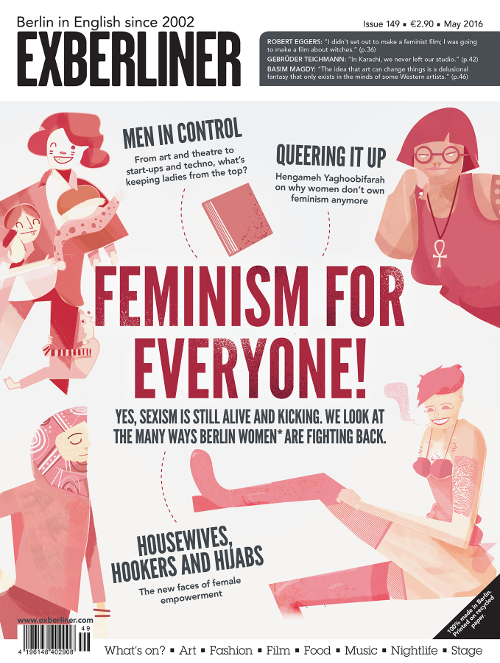 Against all expectations, sexism is everywhere in Merkel’s land. Meanwhile, Berlin’s new breed of feminists have their own battles to fight.

With a woman as chancellor and social dynamics fuelled by strong, empowered, self-controlled (at times controlling) females matched by unusually placid male counterparts, you might feel that Germany has reached some advanced stage of the gender struggle. Some men seem to be so threatened, in fact, that ‘nonfeminists’ and ‘masculinists’ have organised on- and offline and even issued a magazine to resist the “feminisation of society”.

Newcomers to Berlin often marvel at the fact that as a woman you don’t get catcalled or groped as often as in, say, Paris. Berliners don’t seem to notice genders – and you think it’s great. Until you get a door slammed in your face and realise that men don’t notice you… at all. And when they do notice you and ask you on a date, they’ll expect you to foot your half of the bill. Oh well, you might think, equality does have a price… until you realise that equality is a sham.

As we discovered while working on this issue, appearances are deceptive. All is not rosy for women in Merkel country. Far from it.

“Rape culture”, as activists call it, is as alive and kicking as in any macho country. Just look at the stats: 58.2 percent of German women say they’ve been sexually harassed and rape is a daily occurrence here like everywhere else in Europe.

The sad question: did Germany really need the Cologne events to wake up? Did we need the offenders to be foreigners (mostly Arab) to acknowledge that Germany, too, has a problem with sexual abuse and that we should have better laws to punish it? Cutting through the deafening cacophony that followed, sobering voices reminded us that no, sex crimes are not foreign imports. Dozens of similar cases occur at Oktoberfest each year, perpetrated by beer-drinking Biodeutschen. “It’s always been there,” explained Missy magazine editor Stefanie Lohaus and author/activist Ann Wizorek in a much-circulated online opinion piece for Vice. Two years before Cologne, Wizorek was already raising alarm with the hugely popular #Aufschrei Twitter campaign that exposed everyday sexism – mostly in the workplace. During the anti-refugee Islamophobic backlash created by the attacks, pragmatists pointed to a more tangible scandal: Germany’s backwards law on sex crimes, and the urgency to reform it. The penal code in this country makes it incredibly difficult for victims to prove sexual offences, but also punishes sex offenders with disconcertingly lenient prison terms. Who would have thought?

And when it comes to insufficient laws, there’s more. In Germany, women have to pay for birth control out of their own pockets as it’s not covered by health insurance. As for abortion, although it is possible in the first trimester, it technically remains a crime, listed in the penal code. And don’t count on improvement any time soon: ageing Germany needs babies! (At least some Berlin househusbands are ready to help with nesting if need be).

Meanwhile, the German labour market perpetuates just about every gender norm. Whereas women have entered the work force en masse (68 percent of working-age women work, next to 77 percent of men), they earn less in comparable positions (the gender pay gap is 22 percent, higher than in many European countries). And men are still overwhelmingly the boss. Women make up most of the nurses and carers while men are the doctors and hospital directors. Granted, Berlin boasts females at the head of two major public companies, the BVG (public transport) and BSR (municipal waste management). But Germany overall is still a shameful paragon of sexism when it comes to its share of women on top of the corporate world: just six percent of board members of the top 200 companies are female, well below the European average. And don’t expect hip, fresh-faced start-uppers to redress the situation: women make up only 13 percent of CEOs on Germany’s hyped “Silicon Allee”, and tend to excel in gendernormative fields like fashion (including hijabs!), flowers, shopping and dating.

Berlin’s ‘progressive’ culture scene offers a similarly discouraging outlook: in galleries, stages and clubs, the cliché of the white man on top is more relevant than ever. It’s true for all big public theatres and opera houses (except the Gorki Theater). Male artists headline most high-profile art shows and sell their paintings for more money. They dominate DJ lineups and electronic music festivals – and all major cultural festivals, for that matter. From Alfred Bauer to Dieter Kosslick, Berlin’s premier film festival, the Berlinale, has only had male directors. And the city’s International Literature Festival is entirely staffed by young women under the paternal helm of its founder Ulrich Schreiber. During the Achtung Berlin film award ceremony last month, the two white male festival directors called for the ‘helpers’ to join them to share a fraction of the limelight. Twenty-two people appeared on the stage, 20 of them girls!

Exceptions are few and far between, and we were surprised to find that many of the most notable ones date back to the post-war period. Back then the Berlin Zoo was headed by Katharina Heinroth (1945-1956), Helene Weigel ruled over the Berliner Ensemble theatre for two decades and Louise Schroeder served as Berlin’s first and only female mayor between 1947-1951.

And in the media? Look at the mastheads of Germany’s leading press organisations and you’ll understand that no matter how many talented female writers, designers and editors there are, men rule the roost as publishers, executives and chief editors. Long gone are the days when exceptional women like Marion Dönhoff could helm a major paper like Die Zeit. Today, Berliner Zeitung’s Brigitte Fehrle and this magazine’s yours truly stand virtually alone in the capital city’s male-dominated media landscape as female editors-in-chief (of non-lifestyle/feminist publications, that is). Even the progressive taz newspaper lost its two previous female editors, Bascha Mika and Ines Pohl, and Tip’s Stefanie Dörre is no longer alone in command.

Sexism is everywhere, and not just among the ‘educated’ classes. A friend told me how during his baker traineeship, men were instructed to keep women out by alleging they wouldn’t be able to carry the heavy flour bags. If you can’t lift 20kg, you can’t make bread! Next time you’re at the artisanal bakery, take note: women sell, but the Meisterbäcker at the oven is a guy.

The political arena seems to fare better, as embodied by Angela Merkel. Thanks to party quotas, about one third of MPs are women – in sync with the overall EU average. But the only true female-friendly parties are the Greens and Die Linke – both of which have more female MPs than men in the Bundestag (34/29 and 35/29 respectively). Then again, women on top are no guarantee of progress: Merkel’s CDU has conservative values at its core, and Germany’s most outgoing women on the recent political scene have been self-proclaimed anti-feminists Beatrix von Storch and Frauke Petry of the populist rightwing AfD (which is otherwise 80 percent men). No wonder so many older men vote for them.

In this sorry state of things, the feminist struggle has clearly kept its relevance. But feminists have changed. The aura of historical figures such as Alice Schwarzer, publisher of Emma magazine, has faded in Germany’s sex-positive capital; Schwarzer is too white, too hetero, and cisgender on top! Her battles against prostitution and the hijab have discredited her altogether as a conservative and a racist.

Meeting with Berlin’s new breed of feminist activists has forced us to reassess the concept. For them, feminism must be reclaimed from the “white, upper-class, able-bodied, cis, heterosexual values” Schwarzer stands for. They don’t even need to identify as women – they’re queer. These ‘intersectional’ fighters are waging a multi-purpose, at times confused, war against racism, homophobia and the old guard. Did previous generations of feminists fight against prostitution as sex slavery and submission to men? The current generation champions sex work as the ultimate form of self-empowerment. Did yesterday’s Muslim feminists drop their hijabs and don miniskirts to free themselves from male oppression and sexist religious traditions? Today they wear the headscarf proudly as a free choice to ‘exist’ in the context of oppressive Western secularism. Feminists once fought to disband traditions and values imposed by men; today’s feminists are reclaiming them. It’s a semantic battle: you just add a ‘-positive’ suffix (‘fat-positive’; ‘sex-positive’, etc) as a means of rehabilitation. The meaning of words has shifted. I was recently surprised to hear that criticising marriage as a form of prostitution was insulting… to sex workers. “It’s assuming that all prostitutes are oppressed, that’s discriminating!” One main stay: housewives have never been en vogue among feminists.

And here starts the ‘long march’ for inclusion and equality for all – the immigrant, the differently bodied, the marginalised. Picking too many fights at once can bring you to into a conceptual cul-de-sac. Think of the murky, multi-layered events of Cologne. Which #Aufschrei do you pick when the victims are women or trans (whose rights you champion in your fight against rape culture) and the perpetrators mostly Arabs (whom you champion in the name of your fight against racism and Islamophobia)? Contemporary, ‘third-wave’, ‘intersectional’ feminists are treading an ambitious but convoluted intellectual path. With no compass to trust but a gut-felt rebuttal of neo-colonial values, they rehabilitate religion in the name of free choice, rediscover third genders as Marx’s new proletariat and substitute the ‘white Westerner’ for the old ‘male’ nemesis in their ‘little pink book’. They don’t challenge traditional patriarchy as much as they do Western culture as a whole… at the risk of throwing out the baby (the concepts of human rights and secularism) with the bathwater (the perversion of human rights by capitalism and under patriarchal men’s rule). Classic feminist battles such as economic parity for women – to queer feminists, a gender reference we should abandon anyway – seem to fall by the wayside. In their new world order, the empowered sex worker reigns side-by-side with the demurely clad hijabi feminist. Which traditional macho man would complain about that?