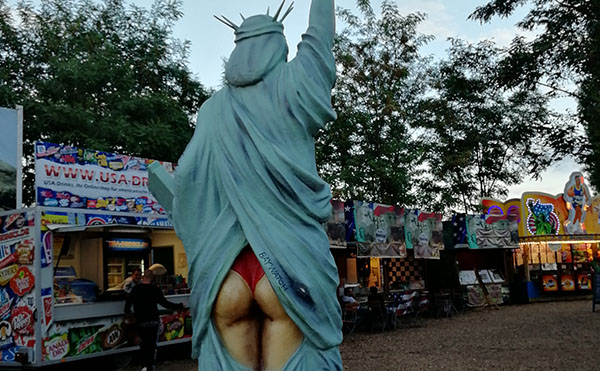 Avocado Johnson goes to that thing you’re curious about to answer the question: Are you missing out? This time, the Deutsch-Amerikanisches Volksfest.

As an American in Berlin, I find nothing more irritating than the voices of my country-people. The “like”s, the hard Rs, the uptalk, my god, the uptalk. It’s inescapable, especially by late summer, when the entire U8 becomes an axis of “I can’t believe you can drink outside here!” Where does one go to get away from it all?

Yes, like many an “American” institution in Berlin, the month-long Deutsch-Amerikanisches Volksfest is as German as it gets, a frozen-in-time oasis of mullets and Schlager where Berlinerisch, not English, is the lingua franca. Founded in 1961 as a display of Allied soft power, it now attracts families from the surrounding burg of Mariendorf and members of Germany’s fading generation of America fetishists – those bikers and cowboys and Corvette owners for whom the country still represents freedom and opportunity, not missing Celebrity Apprentice tapes and obscene blood sugar levels.

And then there are the handful of actual Americans there to gawk at it all – like me and the Gay Berliner. We were there for Pink Tuesday, a weekly event that the festival programme, perhaps not wanting to scare away homophobic Mariendorfers, had described as “a day with music that brings colour into one’s life”. Okay then.

We paid our €2.50 entrance only to encounter a barren amusement park, where American and German flags backdropped 1990s-era rides and carnival games where you could shoot air rifles at Coca-Cola cans. A couple kids aimlessly chased each other around on bumper cars as bored employees looked on. Food stands sold bratwurst and garlic baguettes and candied almonds, reminiscent of the Alexa Christmas market minus Glühwein (and people).

After some walking we found ourselves in the heart of the festival, the “American Village”. Here at last were a couple of burger stands, and a guy selling “USA Drinks” like Dr. Pepper and Mountain Dew. A mini-exhibition courtesy of the Allied Museum in Zehlendorf included US Army paraphernalia and a fiberglass replica of Tempelhof’s Berlin Airlift memorial. Next to this sobering reminder of real American heroism was a fake Statue of Liberty with her ass exposed.

We grabbed a couple €3 Miller beers and settled in next to the stage. Entertainment for the day was provided by DJ Big Baer, whose name, we figured, hinted at the true nature of “Pink Tuesday”. As it turned out, the man was definitely big, but too hairless to be a bear, and his choice of tunes was more “Gangnam Style” than Pet Shop Boys. And a quick scroll by my companion revealed zero potential Gay Romeos in the area. Had we been lured here by a pink herring?

Eventually a woman wearing an upside-down coffee filter for a shirt and a man we’d mistaken for the sound engineer wandered onto the stage, proclaimed themselves the “German part” of the Volksfest and started performing Schlager tunes. (We later found out it was these guys.) An Andrea Berg number finally lured out a middle-aged lesbian couple with jet-black dyed hair, who danced as if they were the only ones there. “Pink Tuesday” or not, it was sweet.

And it wasn’t that German, in the end. As the Gay Berliner and I sipped our watery Millers, we reflected that between the chintzy music and the Three Wolf Moon shirt, we might as well be at any county fair in the Midwest. Dorfkultur is Dorfkultur, no matter where you go – and in that respect, the festival really had bridged the Deutsch-Amerikanisches divide.

Worth the trip to Mariendorf? For curiosity-satisfying purposes alone, yes. But I won’t recommend it too highly. Wouldn’t want it to be swarming with Amis next year, after all.