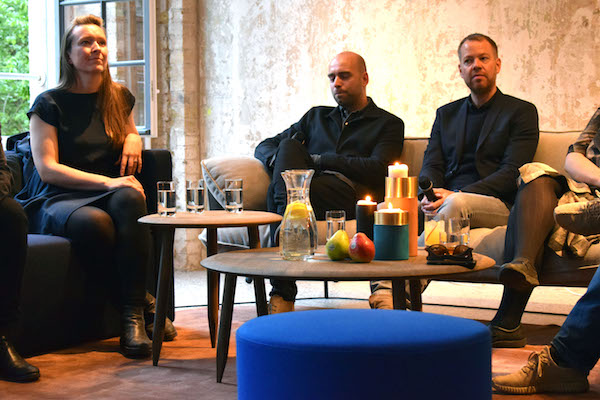 Avocado Johnson goes to that thing you’re curious about to answer the question: Are you missing out? This time: Freunde von Freunden’s “Loosen Tongues Bar Night”.

As we all know, Berlin’s urbanscape is at a crossroads. The cheap rents that once drew so many creative hopefuls here are fast becoming extinct as the housing crisis continues to push immigrant and working-class Berliners out of trendy neighbourhoods (above text provided by 100 monkeys placed in front of 100 typewriters in a Wedding Altbau). It’s easy to describe, but harder to come up with viable solutions.

This didn’t only mean fancy cocktails and goodie bags for all attendees (yay!). It meant the presence of a Dublin-based “brand ambassador” named Peter on the panel itself, which otherwise comprised a city planner, an American documentarist and two people involved in Holzmarkt.

So it was that potentially interesting conversations about the role of government versus corporations in providing affordable housing for Berliners kept getting derailed by interjections about how a certain plucky Irish distillery managed to revitalize a rundown part of Dublin without taking away from its quirky neighbourhood character (a man rode a pony down the street once! Can you imagine? A PONY!).

To his credit, the moderator didn’t let Roe & Co’s man entirely off the hook, questioning him about his brand’s role in gentrification – to which he mumbled something about Dublin’s need for better public transit, so that more working-class types could be shunted off to cheaper plots outside the city center. That answer would’ve raised an outcry among the many Kreuzbergers who’re no longer able to afford the flats they’ve been living in for decades, had any been in attendance. But the talk was a) in English, and b) not open to the public; and anyway it’s so much more fun to decide the future of a city’s hypothetical low-income long-term residents without them actually being there to cramp your style.

Goodie bag in hand, I headed out the door only to encounter a couple of suavely suited chauffeurs ready to escort the talk’s attendees to the next part of the evening. A shuttle drove us 2km to Hermannplatz, where we were ushered through a series of parking lots into Morphin, a soon-to-close pop-up speakeasy in back of the Urban Industrial furniture store.

Someday, when bored academics are piecing together the history of Berlin, they will find this moment and pinpoint it as the beginning of the very end: a shiny black Mercedes gliding over the cobblestones of Kreuzkölln, commissioned by a media company famous for taking pretty pictures of rich people’s apartments and paid for by a multinational corporation masquerading as an artisanal label, filled with tipsy advertising professionals convinced they’ve finally made headway on that pesky gentrification problem.

After one last round of free drinks at the bar, we were encouraged to continue the conversation over cocktails on our own dime, to the tune of €8.50. Did I buy one? You better believe I did.

FOMO Factor (How bad should you feel about missing out on this?): 1. You missed out a little if you didn’t make it to Morphin Bar before it ended its run on Friday; it was a cool little space and I won’t blame it for being involved in this.