Whither Merrill “Peaches” Nisker in 2018? We’re at the point where children who were conceived to “Fuck the Pain Away” can now legally enjoy a cigarette after fucking their own pain away. Sex positivity, gender fluidity and even vagina imagery are no longer novelties in music, and #MeToo has put former fringe topics like consent and patriarchy-busting on everyone’s (mouth) lips.

And yet Berlin’s favourite Canadian expat (sorry, Stephen Paul Taylor) hasn’t left the cultural conversation. She’s had songs placed in new feminist cornerstones like The Handmaid’s Tale and Full Frontal with Samantha Bee. And judging by the suffocating crowds at Sunday’s NBK event, she’s as beloved in her second hometown as ever.

The Facebook event double-clarified that this wasn’t a free Peaches concert – just an “experimental performance of her work” tenuously connected to the closing of NBK’s Valie Export retrospective. Still the queue stretched past the gallery along the wall of the Dorotheenstadt cemetery, populated by drag queens and serious-looking arty folk and older Americans with guidebooks and cardigans tied round their waists.

Thanks to NBK’s limited capacity, only about 200 of them could get in. Thanks to the hordes of Peaches friends and VIPs and press (ahem) who received priority entry, only about 150 of them did. The lucky few had queued up at least an hour and a half early. What did they get in exchange for their time? 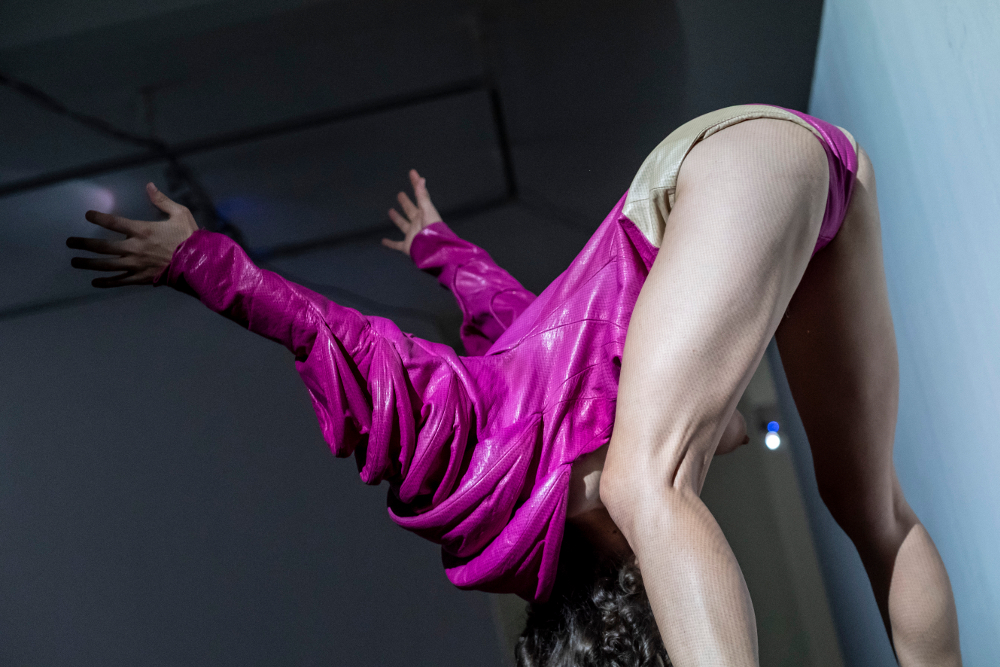 Well… not Peaches. Instead, Nisker hung back as a cross-section of the Berlin queer/burlesque scenes, some 20 performers of all genders and body types, did the actual work. Atop raised stages throughout the gallery, in various states of undress, they carried out looping actions to a monotone voiceover of Peaches’ lyrics by Julie Chance (Evvol/Kool Thing).

“Diddle my skittle,” went her icy Irish brogue as a table full of people in plush vagina headpieces shoved each other’s face-genitals into their real crotches. Behind them, burlesque artist Noeline La Bouche wriggled out of and back into multiple pairs of red underpants as Mad Kate did a kind of standing crowdsurf across the room. Others silently screamed into or fake-fellated microphones, wearing period-blood-stained undies or strategically placed silicone patches.

Shocking? Not in this city. Anything we hadn’t seen before? Also not – a pink leotard and a couple of strap-on-adorned jumpsuits from Peaches Does Herself even made repeat appearances. Still, it was good fun.

The biggest difference between this and Peaches’ 2010-era masterwork, besides the lack of Peaches, was of course all the smartphones. The dramatic lighting and striking tableaux in the gallery made for irresistible Instagram-bait – think The Museum of Ice Cream, but with merkins. Often Mad Kate had to wait for audience members to put their phone down before stepping onto another pair of hands.

The only voice heard in the gallery, besides La Chance chanting “Dick, dick, dick” for a good five minutes, was that of one blonde girl with a blue feather boa extending from her nether regions. Every time a phone was raised in her direction, she’d shriek, “No! Don’t take a photo! I haven’t given my consent.”

Part of the act, or just a personal preference? No idea. But for me, it was the only truly surprising aspect of the 50-minute performance. Take note, Peaches: vagina hats aren’t provocative in 2018. Refusing to let yourself be Instagrammed is.