With futuristic materials and lofty goals, these entrepreneurs are building sci-fi devices to counteract the digital world’s invasion in our lives.

The bed looks like one straight out of an African safari. But instead of keeping mosquitoes out, the mesh canopy surrounding Mathieu Bujnowskyj’s furniture protects against another potentially dangerous invader: electromagnetic waves.

The French architect unveiled his “Full Spectrum Furniture” in October at Haus der Kulturen der Welt’s Forecast Festival for new advances in architecture, art and design. The translucent canopy enfolding his bed box is no mere mesh, but breathable Aaronia AG fabric, made of nylon fibres micro-coated with nickel, copper and silver. When assembled correctly, it can block out 98-99.9 percent of electromagnetic frequencies (EMF) – including Bluetooth, wi-fi and 4G. The fabric was originally designed for military and banking secrecy purposes, but Bujnowskyj has taken its mystical properties and ingeniously created the ultimate middle finger to the digital world.

In his reference booklet for the Forecast Festival, Bujnowskyj called the furniture a “quiet shelter in our over-connected lives”. “I chose furniture because of the scale – building something big would mean that it would stay conceptual, but furniture can touch the lives of many,” he clarified over Skype from his family home in Lyon. He’s just returned from an eight-month fellowship in Japan, and is about to move to Basel.

Along with the bed, Bujnowskyj (under Swiss architect Philippe Rahm’s tutelage) produced two other pieces, both influenced by traditional Japanese design. One is a byobu or “wind-wall” co-designed by Austrian artist Peter Jellitch. The decorative screen has two sides, one which absorbs sound reflection to enhance the acoustic quality of a room; the other made of the Aaronia AG fabric. Wall scanners, thermal cameras and the Predator couldn’t see you through the thing.

The other is a coffee table meant to encourage diners to stash their smartphones out of sight before eating. “You don’t always need a hi-tech solution to a hi-tech problem,” Bujnowskyj says, contradicting the complex work of his other two designs. “In Japan, there is a clear distinction between the outside and inside world. When you enter a house, you take off your shoes and put them in a cubby.” Thus the table’s name, “Ketaibako” – ketai meaning “mobile”, and bako from the Japanese word for “shoe cupboard”. Soft silicon pouches placed underneath the table invite users to put their smartphones in and enjoy an old-school, analogue chat with loved ones.

In the next few months, Bujnowskyj hopes to begin the crowdfunding process to actually produce his designs. “The bed box would be very complex to mass produce, so the other two would probably be produced first,” he says. But Bujnowskyj is less concerned with turning a profit, and more with starting a conversation about our relationship with our devices. All in all, he is just happy that his “Full Spectrum Furniture” was realised, period. “To go from theoretical to practical is amazing in itself – and the next iteration will be even better.”

Closer to realising their post-digital goals are the Brazilians behind the Berlin-based TOCA. Their lightweight smartphone sleeve either keeps your device’s radiation from reaching your body or blocks the signal entirely, depending on which of the two pockets you put it in.

Two of the three co-founders are Luter Filho and Denis Altschul, graphic designers previously known for their quixotic attempt to “fix” the U-Bahn’s Brandenburg Gate image via stickers that correct the perspective on the offending column. In mid-2015, Filho was working on a campaign to stop texting while driving at his former ad agency. His friend Andre Hostalácio showed him a bag he’d found on his travels through Asia that was made with a special fabric that could block smartphone signals. The campaign never materialised, but later, in autumn 2016, Hostalácio approached Filho and Altschul’s design agency in search of a logo for his own prototype. Both immediately wanted in.

“The design was like a wallet thing that didn’t really work, but the idea was there,” Filho recalls. Four months later, they flew to Bali – Hostalácio had lived there previously, and knew he could produce the design they needed more cheaply and quickly there than in Europe. By the fall of 2017, they had a solid prototype tailored by recent Universität der Künste (UdK) graduate Gabriela Guasti Rocha and a Kickstarter plan to match.

TOCA “protects the body from radiation and distraction,” Altschul says enthusiastically, showing the sleeve off . “It can be rolled up to fit into your hand, attached to your belt, hung around your neck… It took so long to find a material that could do all that.” They settled on parachute fabric. “It does all that and it’s water and fire resistant,” says Hostalácio. But the real secret in their proverbial sauce is the fabric they use for the lining, a silver and polyester combination that stops wi-fi, Bluetooth and smartphone signals from entering or leaving. “We get that from Statex in Bremen. They’ve been around for 40-50 years and supplied companies like Lufthansa and Dell Computers.”

That fabric lines the so-called “Faraday” pocket, which the TOCA team says can be used to block calls, texts and notifications during driving, or protect users from being spied on. “Airplane mode won’t do it. Neither will turning it off. To completely stop the signals, you’d have to take the battery out and throw it across the room!” says Altschul. But what makes this sleeve special is the second pocket, which allows information to be received and transmitted while still acting as a “shield” to protect the body.

At the beginning of November, they hit their crowdfunding goal of €19,000 with just hours to spare. After relocating production to Poland, they’re hoping for their first 300-400 sleeves (€44 each) to be delivered before this Christmas. They’ve recently applied for a €24,000 creative prototype grant from UdK. But more than the business side of things, for Filho and the boys, the main message is clear: “We want people to find a balance between health and technology. It’s more about education and digital health than becoming a billionaire.” 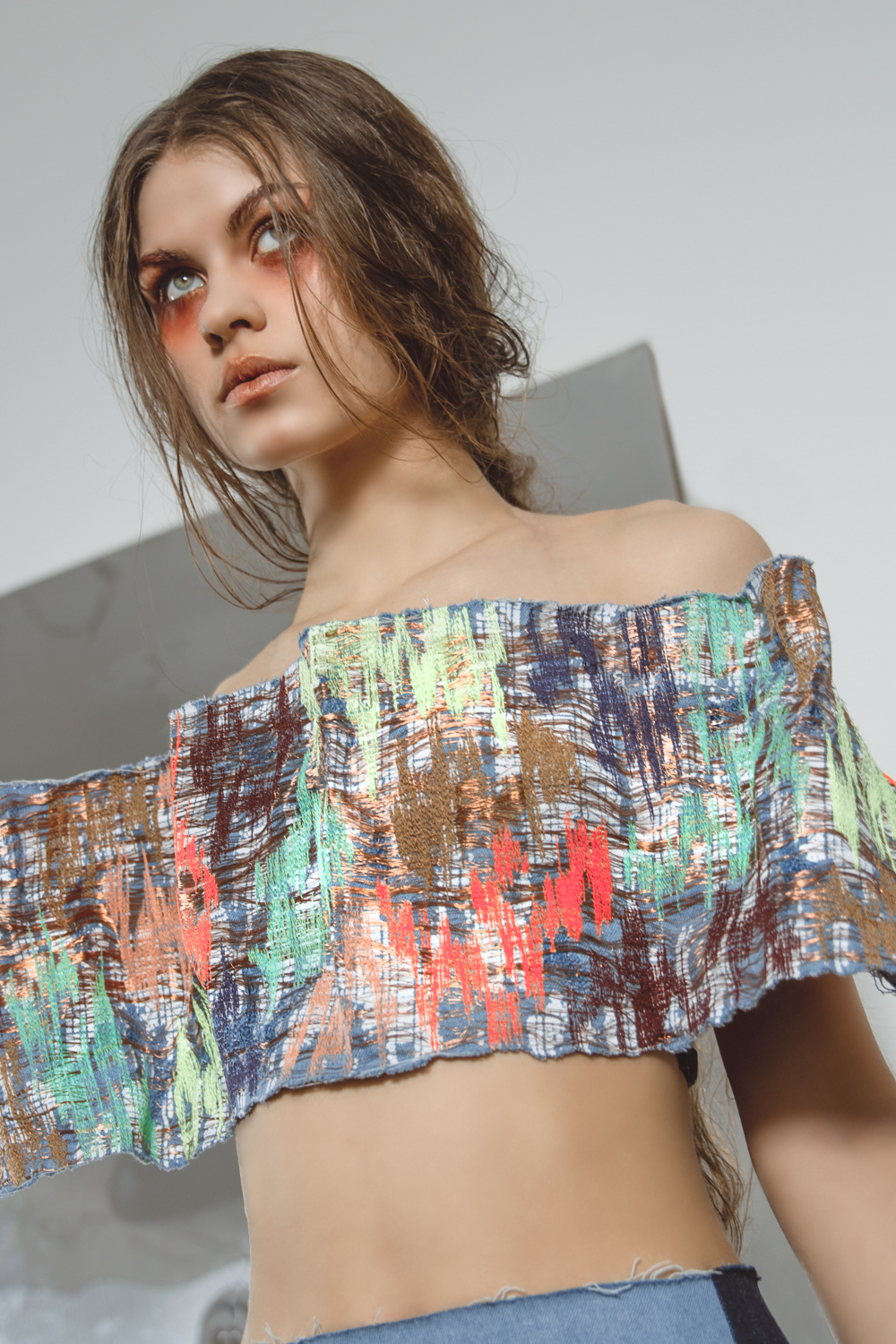 Meanwhile, TOCA designer Gabriela Guasti Rocha has plans of her own. Rather than block signals, her new experimental clothing makes us hyper-aware of them. “My design is meant to act as a second skin that wakes up your senses,” says Rocha of her project Intueri. Deep? No doubt. But this is arguably the coolest clothing innovation since Hypercolor. Rocha’s gauntlet-like sleeves, tube tops and skirts emit sound and vibrations when it picks up electromagnetic waves and other signals from the environment. “I used denim as the base because it’s familiar to people. This is something that people need to be aware of now, not in 20 years.”

A black and white graphic print, inspired by Ecuadorian textiles, is stitched into the denim, followed by a third “imperfect” ripped denim, then a layer of conductive copper fibres that move and emit sound as they pick up signals from digital devices. “Everything in your life is not stable,” says Rocha. “There is a crazy world of electromagnetic waves that is around all the time, which holds more and more influence over us.”

“There is a crazy world of electromagnetic waves that is around all the time, which holds more and more influence over us.”

So where does she come up with this stuff? Ayahuasca? DMT? “No, I don’t do drugs! For four months in 2014, I visited Peru, Columbia, Ecuador, and Bolivia doing research in textile museums.” She became interested in indigenous artifacts that were used to “speak with the spiritual, communicate with parallel worlds”, inspiring her to design clothing that can “see the unseen.” Waking people up to the unknown has been a constant theme in all Rocha’s designs. “Apple and Google are almost like religions now. They create phones that are magical things, with amazing technology. Yet we need to take a more careful look at them now.”

Naturally these philosophical issues are important, but one that is way more essential to the project’s success cannot be glossed over: can you turn it off? “Yes. It would drive you crazy to be on all the time!” Considering that the copper layer also picks up radio waves, it’s probably a good idea to have an off switch.

Gabriela is open to propositions about scalability, but has no current plans to raise funds for her project. Like Bujnowskyj with his furniture and her TOCA colleagues, her main goal is to make people more aware of the constant electromagnetic forces surrounding us. “If people think about it, then that will make them act.”