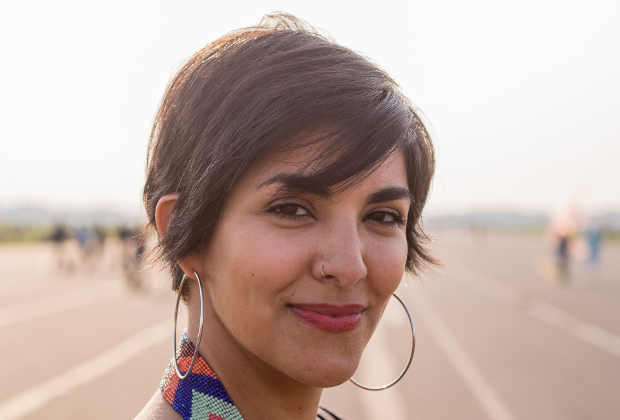 Alongside Caram Kapp and Don Karl alias “Stone,” Heba Amin is one of three “Arabian Street Artists” who pulled off an audacious ‘media heist’ last month. Hired by the ultra-popular American TV series Homeland to provide Arabic graffiti for a refugee camp set located just outside of Berlin, the trio instead left messages that expressed in no uncertain terms what they thought of the series: “Homeland is racist”, “the situation is not to be trusted”, “Homeland is a joke and it didn’t make us laugh”. We spoke to Heba Amin, not just about Homeland, but also the bigger issues for which it stands and how we need go about dealing with them in the future.

So is Homeland racist? What’s your problem with the series?

It’s basically propaganda. Aside from its gross misrepresentation of the region, it helps shape people’s views and convinces them to participate in a certain kind of politics. They place their storyline within reality, but alter it very slightly in ways that might not be noticeable for everyone, but are extremely dangerous.

We come from this region that’s incredibly diverse. We come from very different walks of life, we have different religions, we have different languages, different cultures… So our [set contributions] tried to highlight the diversity of these cultural references. For example, one of the signs that Caram wrote said “Falafel and alcohol from the hands Faiza” and then made up this elaborate story about a Christian Syrian named Faiza.

And since two of us are Egyptian, we made very specific Egyptian media references. That’s the discussion that’s happening on this side. When the Arab media picked up the story, they were really fascinated by these perspectives that we took, and they found some of the phrases we used quite funny.

“Homeland is watermelon” is one that went viral…

[Laughs] Yes, that was definitely a popular one. But that one goes across the board; many countries use that phrase. It’s an incredibly absurd phrase, which is why it kind of worked out so well.

When you saw your graffiti in the show, were you worried about repercussions?

I think in the back of our mind we were always a bit worried, but we did consult with a lawyer to make sure, and we didn’t sign any contracts. It was just a verbal agreement. The thing is, the stuff that we wrote wasn’t that bad. [laughs] It was more humorous. Of course we were worried, especially when it exploded and the media was all over it. But then at one point we realised because the story is so big, they couldn’t really do anything. We embarrassed them, and repercussions would just make them look bad.

Alex Gansa, one of the show’s creators, said he “can’t help but admire this act of artistic sabotage”. Do you think that’s at all genuine?

No, of course not! We totally inconvenienced him. [laughs] It’s kind of a ridiculous statement, but it’s the only thing he could say. I was pleasantly surprised when I first heard it, but the more I think about it the more it annoys me, particularly when he said it was “in the spirit of Homeland itself being subversive”, as if they’re open-minded about these issues – which they’re not.

Would you say the errors that Homeland makes are more misinformed than malicious? And would that make it better?

It doesn’t make it any better. It may or may not be malicious – who am I to say – but regardless, when you have a show that named one of its main terrorist characters the same name of the former Pakistani ambassador to the US [Husain Haqqani], you’re basically equating these political heads of state to terrorists, and that shapes the perception of people. That’s really dangerous!

And it’s not just that they don’t know, it’s that they also don’t care. The way we were addressed, it was very clear to us that they didn’t care what we wrote. They even brought in reference images of what they wanted the text to look like, and it just so happened that their reference images were pro-Assad graffiti, and they had no clue! It’s not just ignorance; it’s really a lack of sensitivity. And it is definitely symptomatic of a much larger issue: it’s not that we’re targeting Homeland specifically, it just so happened that the opportunity presented itself.

Do you think it’s possible to have an American show with a premise like Homeland, but which deals with these issues in a way that does justice to the Middle East?

To be honest, I don’t even have the energy to think about how a show like Homeland could be accurate. That doesn’t concern me. If anything, what I can get out of this is that it started a dialogue. The fact that so many people responded to this act and it became viral means something. We were doing interviews in China and Iran and Colombia, so this is something that resonated worldwide. To me, that indicates that people are just really fed up with the politics of media. It started a conversation that we hope continues – although I’m not so hopeful about that, but we’re trying to push it forward. At the end of the day, this conversation is not about Homeland. It’s about the bigger issues.

What are your own plans for keeping that conversation going?

We’re working on a film in relation to the Homeland hack, commissioned by “Field of Vision” (a documentary unit founded by Laura Poitras of Citizenfour fame). Season 5 of Homeland delves into a new narrative on hackers in Berlin and government leaks, with a new journalist character named Laura that obviously resembles Poitras. We have further been commissioned to write more articles regarding the broader theme of minority representation in Western entertainment, particularly of the Middle East; we hope to use this opportunity to also talk with certain people who have a thing or two to say about the topic. The Homeland hack was just the instigator of a much broader project we hope to undertake. How this will manifest, we are still unsure.