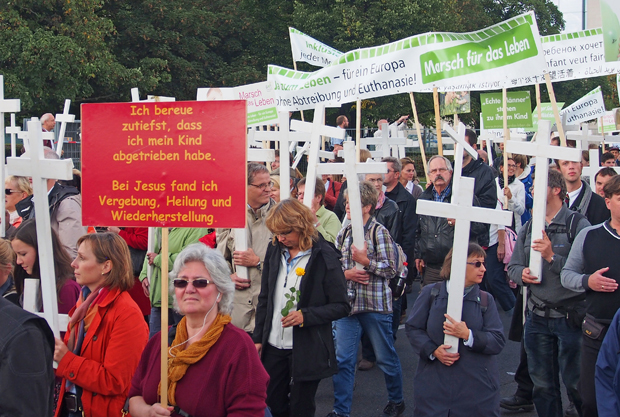 It was a dark winter afternoon in Berlin. A Sunday. A Spanish exchange student and I were wandering through Prenzlauer Berg, from one gynecologist’s office to the next, trying to get the morning-after pill, and it wasn’t going well. In Germany, you can’t get the pill without a prescription, but most doctors’ offices are closed on Sunday.

Our experience was not unique. A friend went to a hospital on a Sunday and waited 90 minutes before giving up and going to the doctor the next day. Another friend broke down in tears at the pharmacy – and the pharmacist eventually gave her the pill without a Rezept.

Why should anyone have to go through this? The pill is more effective the sooner it’s taken. And Germany’s Bundesamt für Arzneimittel und Medizinprodukte (BfArM) has declared the medication safe as far back as 2003. So is there any medical reason it shouldn’t be available over-the-counter?

No. There is only a cabal of (mostly male) conservative politicians who are demanding these medically unnecessary trips to the doctor. Their thinking seems to be that if a woman wants a normal sex life (which will inevitably include an occasional emergency), she should be subject to degradation.

This is only one example of the fact that reproductive rights in Germany are not as far developed as you might think. The infamous Paragraf 218 of the criminal code – which millions of people protested against in the 1970s – still penalises abortion with a jail term of up to three years. But the procedure is decriminalised in certain cases, such as if a woman is raped, if her health is in danger, or if, within the first 12 weeks of pregnancy, she goes to a state-sponsored consultation and then waits for three days. “Advertising for the termination of a pregnancy” is also prohibited – with up to two years in jail – making it difficult for providers to offer information on the internet.

Even rape is, in modern Germany, not technically illegal. It is criminal to have sex with someone using force or violence or the threat of force or violence. But having sex with someone against her (or in much rarer cases, his) will is not by itself a crime. This means that judges look at how a victim physically defended herself – one court in Essen decided that since a 15-year-old girl didn’t scratch or scream, the rapist hadn’t committed a crime.

Next Saturday at the Brandenburg Gate, fundamentalist Christian, anti-choice demonstrators – so-called Lebensschützer or “protectors of life” aka 1000 Kreuze – are marching against the severely limited right to abortion. But this isn’t just a lunatic fringe, either. Thousands of people attend the march every year, which gets greetings from CDU politicians and Catholic bishops. Catholic bishops that are paid from your tax money – whether you’re Catholic or not.

Now, I don’t mind if these celibate men don’t want the morning-after pill for themselves. But they have no right to order their tax-funded hospitals to deny a safe, reliable medication to the victim of a sexual assault.

I’ll be going to be out on the street next Saturday, together with the Bündnis für sexuelle Selbstbestimmung, to protest for a woman’s right to choose. That’s a much better way to spend the day than trying to find an open gynecologist’s office.