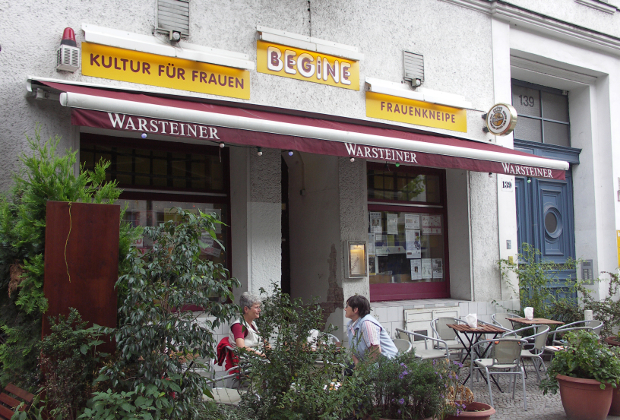 This March 8, celebrate International Women’s Day. Said to go back all the way to 1857 with real socialist roots, it’s still celebrated in left-conscious Berlin to this day. How are you going to celebrate your power of Venus? Or show that men can be feminists too by taking part? Here are Exberliner’s tips for having a fierce Frauentag!

Want to celebrate in the most literal way possible? Head to northwestern Schöneberg – aka Berlin’s gay male ground zero – and you’ll find BEGiNE, the city’s one and only female-only watering hole. On the ground floor of a once-derelict building taken over by a group of female squatters in 1986, the place is still going strong – even if it is a bit of a time warp upon entry. Red velvet, dark wood and cork noticeboards crammed with ads give this Frauenkneipe a certain “traditional” feel, as do the guests, many of whom have been regulars since the bar first opened 30 years ago. As for the question on everyone’s lips: no, it’s not technically a lesbian bar, although L Mag is for sale on the counter. Basically, any woman craving an escape from Berlin’s 100mph party scene can rock up here – whether you want to find out more about the dance classes and self-help groups run by the BEGiNE non-profit women’s support centre, or simply enjoy Friday night with a few drinks (small tap beer, € 2.40) and some Shakira classics.

Not just for girls

Opening on the day, the third edition of the Berlin Feminist Film Week promises yet another well-rounded programme that not only raises awareness of wide-ranging gender-related issues, but offers insights and solutions as well. The eloquent, fluid documentary CODE: De-Bugging the Gender Gap, for example, dissects the phenomenon of a male-dominated tech industry, asking “why?” all the way. While You Weren’t Looking, meanwhile, delicately dramatises the relationship of a South African mixed-race lesbian couple and that of their adoptive daughter with a ghetto tomboy. There’s also a mid-week bash and a feminist film quiz.

Wanna see something international on International Women’s Day? Then the Gallery For Good’s pop-up exhibition Planet Her is the place to go. The exhibition comprises mainly portraits, showcasing women of all ages and representing a total of 20 countries, from Vietnam to Tanzania to Uzbekistan. The photos capture different levels of femininity – from sisters at a wedding to a striking image of a young Masai girl, this event celebrates the independence of women in cultures the Western media overlooks. Out of the six photographers exhibited, three are women: the works of Berlin based Audrey Scott (Uncornered Market), Oana Dragan and Shereen Mroueh (both Canadian based, G Adventures) all highlight the way travel can change stereotypes.

Party for your right to fight

And of course, there’s the demonstrations and parties (they tend to be one and the same here). True to how we do it, there are two in Berlin, with Frauen*kampftag, the official nationwide demo, actually happening a few days earlier on March 6, 11am at Rosa-Luxemburg-Platz. If you’re looking to show more solidarity on the actual day, Kottbusser Tor will host its own on March 8 at 6pm, complete with celebrations at Möbel Olfe and Südblock afterwards.