Political philosopher and author Joseph Vogl on how conservatives have been fostering xenophobia since decades before the AfD.

The refugee crisis was a paradoxical moment in German politics, showing the face of an open, generous Germany while at the same time triggering enormous xenophobia and catapulting a small, radical right-wing party to the forefront of the political landscape… What’s new today?

In a way, the AfD isn’t anything new in the German political landscape. In West Germany we always had almost 20 percent of voters leaning towards the radical right, and we’ve always seen CDU-CSU campaigns looking in the direction of that right-wing fringe. What’s new is that for the first time a party is succeeding in making this electorate productive – it’s also become a phenomenon of the middle class, among both voters and representatives. And they’re coming to set the political agenda. When it comes to refugees, for example, the CDU-CSU is now actually implementing the policy of the AfD – and that’s hypocritical and disgraceful.

Are we witnessing the end of Germany’s immunity to populist movements?

I’d rather call these “resentment movements”. Populism comes from the US movement of farmers in the 19th century against the big financial capital of the time – the Rockefellers, etc. They fought for women’s rights, for black people’s rights and especially for cheap credit for farms. In contrast, movements like the AfD are sustained by mechanisms of resentment. They don’t go to the streets to fight for something, but against – mostly against foreigners. It is self-affirmation by exclusion of the other. In neo-liberal democracies, a main issue always has been how to organise resentment. This time, there was a sort of golden opportunity: this “immigration crisis”, which was also a globalisation crisis. Suddenly, these people came to the conclusion that their main adversary is not the multinationals or Deutsche Bank, but the immigrant – he is stealing my job, my social security, my life… So concern towards globalisation was brought down to a very local form of resentment against the refugee.

From Nazi times to East Germans chanting “Wir sind das Volk” as the Wall fell, das Volk is a loaded word in Germany… so who’s the Volk and how did AfD and Pegida hijack it?

Here you need to hear the shift of the accent from “Wir sind DAS VOLK” to “WIR sind das Volk”, a shift from an inclusive notion of das Volk to an exclusive one. This was facilitated by the emergence of a new general enemy: Islam. And in a way, Islamophobia borrowed a lot of formal elements of anti-Semitism which were always there in Germany. We somehow moved from the Jew to the Muslim, but whereas anti-Semitism couldn’t be expressed outside neo-Nazi groups or the NPD, Islamophobia could be expressed without restraint. The dangerous transgression of old taboos has become easier.

So would you say that with Islamophobia, Germany has gotten over its “Auschwitz syndrome”? That Germans can now be as racist and nationalist as anyone else?

You need to realise that Islamophobia and anti-immigration sentiments are not an AfD thing. It’s been at the centre of our official immigration policy for decades – Germany’s mainstream politics! Since the 1990s we’ve seen a continuous strengthening of anti-asylum politics, starting with the 1993 reform of the constitution adding restrictions to article 16, “Politically persecuted persons have the right to asylum”, up until recent enforcements of limitations to asylum and deportations. So this is not a dramatically new situation, but a dramatically old situation.

But Merkel did allow almost one million refugees to come in, before she finally decided to close Germany’s borders, restrict asylum and even support deportations. So there’s been some change, hasn’t there?

There’s only been change in the public mood, that’s all. Not in official policy. There was a real, amazing surge of Willkommenskultur in the autumn of 2015, but it came out of civil society. It never was Germany’s official policy. What happened from August 2015 up till the closure of borders in March 2016 was a state of exception. Merkel’s politics are completely opportunistic. She waited three weeks for refugees to actually be in Germany to say something, and she said, “Wir schaffen das”. And if you observe what happened more closely: Merkel let people in, and that was very easy. But she did nothing to handle this huge wave of newcomers. No structure, no administrative and political measures. In most states you saw chaos and dysfunction. The money was there, the civil society was there, there shouldn’t have been a refugee “crisis”, and yet… This shows the total lack of commitment of Merkel and her government, in total continuity with the policy of the last 30 years.

Are you referring to journalist Robin Alexander’s revelations about Merkel’s behind-the- scenes decision-making during the refugee crisis (Die Getriebenen)? How she let people in not so much out of humanity, but out of concern for Germany’s (or her own) image?

I haven’t read Alexander’s book yet, but his reconstruction of the events in the autumn of 2015 – a mixture of confusion, some principles and much opportunism – probably coincides with my assessment. It was not at all political courage, but a sort of fear of playing the “ugly German” again.

Do you think that the AfD influenced Merkel’s decision to close the borders?

This is Germany, and you can’t underestimate the importance of showing the rest the world that ‘we’re not the old Nazis any longer.’

Let me put the issue in different terms: The democratic political process is informed by feedback mechanisms. When the refugees came, the euphoria of Willkommenskultur created a certain level of self-satisfaction among Germans: “We are the good people.” This is Germany, and you can’t underestimate that – the importance of showing the rest the world that “we’re not the old Nazis any longer.” So this created positive feedback loops. Now, the official policy is looking for other feedback loops. For example, the deportation of refugees from Afghanistan – it doesn’t solve anything, but what’s important here is to create acts of demonstrative inhumanity, or perfidy, call it what you want. This has a strong feedback effect. It shows the electorate on the right that their politics are effective. But so-called “populism” has only short-term solutions, “throw the immigrant out”, to a problem it’s not able to formulate correctly. Which is, basically, the problem of contemporary capitalism.

So populist or “resentment” movements are a byproduct of modern capitalism?

That’s my thesis: that modern populism has its roots in the collapse of solidarity milieus due to neo-liberal politics. It was particularly dramatic in the East, where reunification has meant a total and systematic destruction of the local industry. Overnight, people who were totally unprepared for it were forced to compete for their basic survival, for jobs, in regions where the economic and social fabric had been totally destroyed – it was a real and deliberate act of colonisation by the former West that happened there. But it’s a phenomenon you also saw happening all across Europe: the ruin of unions, the reduction of social expenditures… And this is the soil of right-wing populism.

You said earlier that the resentment is nothing new… so what’s propelling the success of parties like the AfD today?

What’s new is that the public is now organised in a different way – through social media, something that the representative democratic system has not been able to deal with yet. Since the 18th century and the printing press, the mass media played a defining role in the development and maturation of democracies in the US, UK and Europe as a whole, and this has come to an end. We have elaborate means to deal with the public through TV, newspapers, etc. But until now, we’ve had no ideas on how to deal with the kind of subdivided public created by the digital age.

What about the acceleration of information social media has created? Twitter’s made the exchange of information quasi-instant… and it’s become a direct channel between politicians like Trump and “the people”!

I believe here you must make a crucial distinction: between information and knowledge. Information can be instant – Trump tweets; it’s information. But it’s not knowledge, which is an intricate, long-term process. And the issue is, can you regain moments of deceleration to allow knowledge? Which is crucial if you want to make an argument in a debate, or do a reportage. I see this to be one of the decisive duties for us in universities, for you in the media, etc. This acceleration of information by social media could be defined as an enemy of our times. We need to learn how to decelerate.

Do you see this deceleration as one possible response to the current “alternative facts”/Lügenpresse era? Where to start?

Each with their own means, in their own fields. By saying, “Stop: let me explain.” By opening windows which don’t close a second later. A new, very dangerous, political motto has come to the surface: “I don’t want to know”, otherwise expressed in that famous term “Lügenpresse”…

Isn’t that a little unfair? Doesn’t Lügenpresse also express a desire to know the truth that the established media is hiding from us?

What would that be, this truth? That the German race is endangered? That Islam will introduce sharia law in idyllic Saxony? This is the logic of conspiracies: if you can’t verify the facts, there has to be a hidden “truth”.

But is it conspiracy theory to point that mainstream media have become pretty uniform in their coverage, or that this “I don’t want to know” motto can apply to the progressive side as well? Take the Cologne events. Sexual harassment perpetrated by immigrants clashed with “our” liberal agenda, so we didn’t report it, which backlashed very badly: every AfD sympathiser we interviewed mentioned it as evidence they should distrust the media…

From what I know, Cologne was more a problem of policing. But what is the argument? That after the Cologne events we should be sure that all Moroccans are rapists? How did you get to know about it all anyway, if not through media? Could it just be that adepts of the Lügenpresse do not actually distrust the media, but just want it to confirm their beliefs, switching to Russia Today or Breitbart for example?

So do you think we’ve come to a situation where people have more opinions than knowledge?

I’d say people have more “prejudices” and simple judgements. Knowledge means a long, delicate process, from observation, through research and reasoning up to forming one’s own opinion. Right now the immediacy of judgement is the organisational principle sustaining social media, such as Facebook likes. This form of general and continual evaluation based on instant judgement is the new culture we live in. Our society values people who can judge fast and have strong opinions, and so teaching – my job at the university, for example – only makes any sense if it means teaching how to reduce judgement.

That’s a long-haul ambition – but when it comes to the immediate political situation, what can we do against right-wing populism and resentment?

Gather the militias against them, and make sure that they do not dictate political agendas! 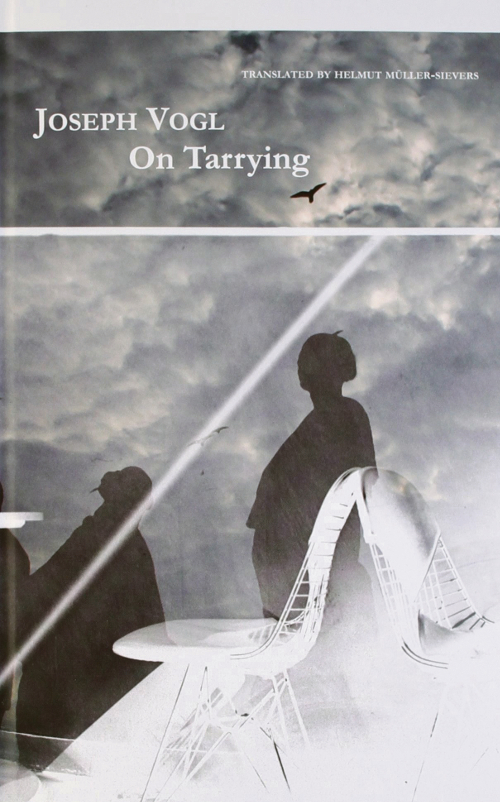 Joseph Vogl is professor of literary, media and cultural studies at Berlin’s Humboldt University and a visiting professor at Princeton. He has authored over 100 articles and book chapters on German literature, media theory, the history of knowledge and political thought. His latest book, 2011’s On Tarrying, is a call for slowed-down decision making in an age of instant judgement. He lives in Kreuzberg in an apartment filled with books and the ever-present scent of tobacco.