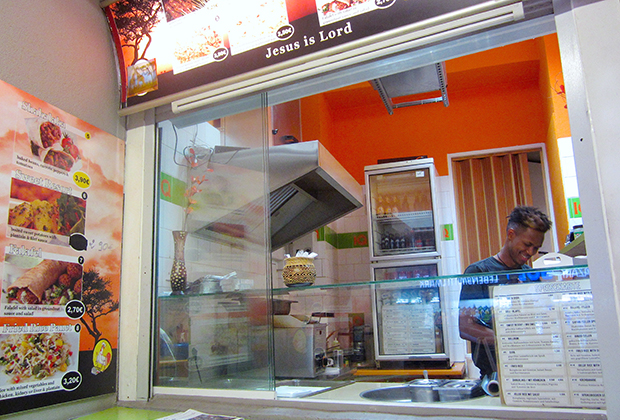 Remember how you arrived in Berlin with a camera in one hand and a notepad in the other, brimming with excitement over the potential of your new surroundings, eager to find and document every last anarchist stencil and abandoned bread factory and Warschauer Brücke sunrise? And then remember how the weather got colder and you got sucked into an ever-shrinking Kiez-hole, spending every weekend in the same smoky Kneipe ignoring texts from friends who lived more than two kilometres away?

That hibernation time is fast approaching, so take the current Altweibersommer as an opportunity to explore those parts of the city that, truth be told, aren’t actually that far away but might as well be Siberia when it’s -15 out and you’ve got a working VPN and two-thirds of a bottle of Lidl whisky at home. For me, way down at the bottom of the U8, that territory would be Wedding (aka “The New Neukölln” – though, ironically given the name, it’s always a bridesmaid when it comes to gentrification). I spent a chunk of the weekend checking out the Kulturfestival in the area, looking at some art, doing some yoga, thinking maybe, finally, The Year Of Wedding was on its way. Until I got hungry.

That’s the point when I realised that if you haven’t done the proper research, Wedding – or at least the “up-and-coming” Sprengelkiez – is kiiiind of a food desert. (Craft beer’s another story, of course, but man cannot live on IPA alone, even if it’s brewed with oysters or whatever.) Without any leads to go on, I wandered forlornly around the barren vicinity of Leopoldplatz, encountering only over-sized Kaplan kebabs. Forget it, Jake: it’s dönertown.

Suddenly, though, the name Safari Imbiss came to me, half-remembered from a conversation I’d had with a Wedding-based friend of a friend last year. My faith in the neighbourhood was restored when I reached the designated address to find a quite literal hole in the wall with an eight-item menu, no seating except for a plastic picnic table and “Jesus is Lord” written on the sign. Hallelujah! Everyone knows the devout make the best food; just ask the ladies at Ixthys, the Korean place in Schöneberg where every order of bibimbap comes with a side order of prostelytising.

Run by a Christian dude from Nigeria (though the guy behind the counter confessed to being Muslim), Safari serves quick, cheap and homey West African food. There’s the obligatory falafel (€2.70), wrapped up with fried plantains and peanut sauce. But there’s also harder-to-find snacks like the delightfully named shakalaka (€3.90), mixed sautéed veggies in a durum tortilla with peanut sauce, and suya (€2.50/2), yakitori-sized grilled lamb skewers… with peanut sauce. (I could almost hear Will Arnett reading me the menu.)

I tried the latter two. The shakalaka reminded me, and I mean this in the best way possible, of a burrito filled with vegetarian chilli. The kidney bean-carrot-pepper-tomato mixture wasn’t earth-shattering, but it was warmly spiced and comforting in that ineffable way that home-cooked food can be. Same with the suya skewers, which came nicely charred – the ubiquitous peanut sauce could’ve actually been left out here, but I guess you gotta have a trademark.

Among other Safari specialties: jollof rice, stewed with tomatoes and spices, and a simple but tasty-looking dish of beans and dodo (plantains). Like Wedding, African food is a bit of a blind spot for me and I’m sure I can find better in Berlin – but lost in a culinary wasteland as I’d felt before that point, my new discovery made me wonder whether there wasn’t something to this Jesus thing after all.

But then… I wasn’t really lost in a culinary wasteland, was I? Readers, prove me wrong! Where do you go to eat in Wedding?