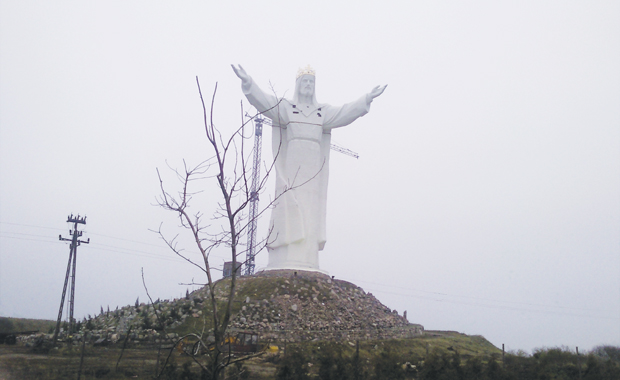 On the outskirts of the Polish town of Swiebodzin (once the Prussian Schwiebus) 130km east of Berlin, on a hillock across the road from a giant Tesco supermarket, one is struck by the immensity of the crowned white Christ standing there. A steady stream of Polish visitors traverses a muddy track to take snapshots with their phones. The 33m-Jesus (one metre for each of the years he lived) stares off into the grey sky towards the west, towards Germany, as if oblivious to the mortal coil below. It’s the tallest Jesus statue in the world (Rio’s measures only 30m), weighs 400 tons and is the brainchild of a local Jesus groupie, Father Sylwester Zawadski. “This is the culmination of my life‘s work as a priest. I felt inspired to fulfill Jesus’ will, and today I give thanks to him for allowing me to fulfill his will,” said Father Zawadski after the head was attached by a 700-ton crane in November. The statue is controversial to say the least. Waldemar Roszczuk, editor of the local newspaper GAZETA Swiebodzinska, campaigned against the Christ, to no avail: “It’s a monster of a statue which has nothing to do with Christian teaching,” he said. “It’s making us a laughing stock in the whole country.”