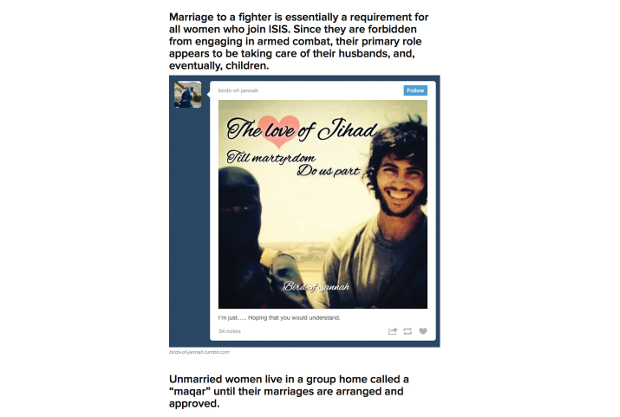 Lured into joining ISIS by a promise of revolution and desert romance, those girls end up as little more than “cheerleaders of the jihad”.

On an ordinary October morning in 2013, Sarah O., a 15-year-old German-Algerian Muslim girl from Konstanz, left for school with little more than her school bag, never to be seen again by her parents and friends. Only a few short days later, she was discovered to have posted pictures of herself on Instagram and Facebook, fully veiled and holding an AK-47, stating that “she was doing well, eating well and learning to shoot while attending daily lectures”. Her parents’ worst fears were confirmed: she had joined ISIS and was now living in Syria. A month later, her father received a call from a male German jihad fighter asking for his permission to marry Sarah. Without her father’s blessing, the couple went forth and performed the marriage anyway. One of her Facebook posts reads: “Jihad. My life. My love.”

Fourteen percent of ISIS recruits are women – an estimated seven or eight girls left Berlin for Syria over the past year. They first make contact via social media, where female ISIS members depict a romanticised life within the Caliphate: Arabian desert sunsets, group photos of fully veiled women looking out onto the sweeping views together, and – the key factor – strapping warrior husbands. “Are the fighters concerned about beauty when it comes to marriage?” asks one anonymous user on the Tumblr blog of a woman calling herself Umm Abaydah. Another has more practical concerns: “Can you find a good hair dryer and straightener in Syria?” And there are pleas. “I am 17 years old and I want to come to Syria very much. I have done my research, but the only obstacle I am facing is my family. I want to come very badly… but how?” The ISIS blogger’s response: “Contact me on Kik, inshallah. I can help.” Through texting apps such as Kik, girls receive step-by-step details of how to reach ISIS-controlled territory upon landing in Istanbul: Buy a Turkcell-specific SIM card at Atatürk airport. Call us at this number. Wait at this hotel, and prepare to make the 3am mad dash across the Syrian border. Comments like “I can’t wait to fight for the Islamic State” and advances such as “Hey, sexy beheader, are you married?” on the now-defunct Twitter feed of James Foley’s killer, it’s all a decidedly Western approach toward what is, in the end, a restricted life of cooking, cleaning and childcare – and writing propaganda, if you’re educated enough. A Verfassungsschutz official defined women in ISIS as “the cheerleaders of the jihad”. Who’d be attracted to that kind of life?

Claudia Dantschke says that many of the girls at risk for radicalisation come from authoritarian households, and are used to their brothers and male cousins being favoured over them. “Salafism gives them a chance to prove themselves. They want the possibility of being recognised as a woman, even if it is ‘only’ in classical female roles like housewife and mother.” Running away from home is also a way to rebel against their families – while justifying it as a “calling” from Allah.

At a “Young Muslim” meeting group held at the Sehitlik Mosque, 80 percent of attendees are women. “I think that many Islamic women are feeling alone and have a strong desire to search for some sort of belonging,” says imam Ender Cetin. The biggest determining factor as to why these groups are succeeding? “These extremist groups really know how to speak the language of the youth. They connect with them more than any regular mosque can.” While some girls, like Sarah O., are able to adjust to life as a mujahideen, others like French 15-year-old Nora el-Bathy, end up regretting their decision. After getting in touch with extremists through Facebook, in January she ran away from home to join the al-Nusra Front. Soon, however, she called her brother in France, begging him to come get her: originally promised she would be helping Syrian orphans, she had instead been forced to watch fighters’ children, and the emir (leader) in charge of her would not let her leave. She told him: “I’ve made the biggest mistake of my life.”