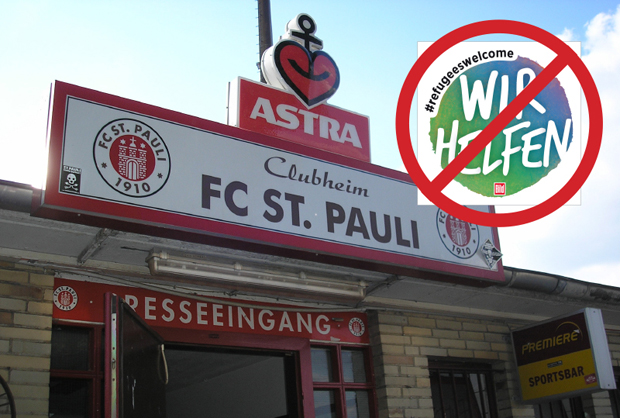 Remember those emotional blackmailing posts people used to put on their social walls? “My mum died of cancer and now my wife has cancer and I know my true friends will share this, and if they don’t it means they hate my mum and me and are on cancer’s side.”

Well, this week Bild newspaper pulled the same tactic with refugees, and asked all 36 teams in the top two Bundesliga divisions to put “Wir Helfen! #refugeeswelcome” stickers (with a Bild logo) on their shirts instead of their normal sponsors. When those contrary pinko anarchists at St. Pauli said they would not join in, Bild editor-in-chief Kai Diekmann took to Twitter, put on his best fake sorrow “Schade eigentlich” demeanour, hashtagged #refugeesnotwelcome, and suggested the AfD would love it at St. Pauli.

This obviously got half of Twitter pissed off, which may or may not have been Kai Diekmann’s intention, and the whole business has now turned into a Thing, because four other clubs (all in the rough-and-ready second division, rather than the slick-and-hollow scared-to-annoy-any-major-media-outlet powerhouses of the top tier) have joined in the sticker boycott – not because they were necessarily that outraged by Bild‘s initial campaign idea, but just out of solidarity with Pauli. Great stuff.

Still, suspiciously sudden and slightly hypocritical morality or not, I’m mainly glad that Bild has gone all we-love-refugees. It must have been touch-and-go at some meetings whether they wanted to stick to the watch-out-for-the-economic-migrants line that Germany’s biggest paper normally peddles. I’m definitely looking forward to the big splash they do slamming Interior Minister Thomas de Maiziere’s latest plan to cut benefits for refugees and stop as many as possible from getting into the job market or onto training schemes – a draft bill that was leaked to the press on Thursday, and which was slammed by many refugees’ rights groups who don’t have a sticker campaign.

Not only that, I’m sure this weekend’s Bild will include an alternative plan calling on Wolfgang Schäuble to quadruple the currently pitiful government budget for refugees and invest in a vast refugee resettlement scheme including social housing, German lessons, education, and job training schemes for all one million refugees regardless of whether they’re Syrian, Iraqi, Afghan or Balkan. I hope they do it soon, because I’m holding my breath.