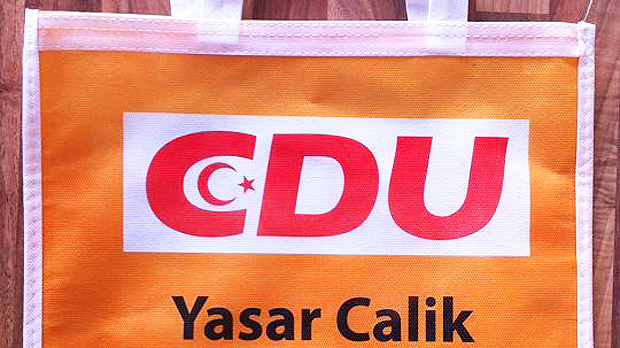 You know what would be good? If the Christian Democratic Union and German Muslims finally admitted that they believe all the same things. Not just some of the same things. ALL the same things. Their opinions are identical. It’s true love. Watching German Christians and German Muslims argue is like watching a climactic scene in a romantic movie where two people who have been bickering the whole time have a big cathartic row and suddenly start snogging and frantically struggling out of their clothes. There’s a scene a bit like that in The Amazing Spider-Man 2: The Rise of Electro, for example.

But if you don’t want to shell out for the 3D glasses, you can enjoy a similar spectacle by reading this week’s story of Yasar Calik, the hapless CDU local council candidate in Neuss, North Rhine-Westphalia, who put a little Muslim crescent inside the C of some CDU shopping bags and was subjected to quite a lot of Islamophobic Twitter abuse for his pains. The poor chap was only trying to point out the obvious – that the CDU offers a natural home for Germany’s Muslim community, because it’s the only political party that still takes religion seriously. And seeing as he has a lot of Muslims in his constituency, it made sense to try and win them over. For some unfathomable reason, Calik had to pretend that it was a “printing error” and that he only meant to lay the CDU logo on the Turkish flag – an excuse that makes no sense, since you might have noticed that one thing the Turkish flag features is a massive great Muslim crescent. Meanwhile, his boss, local CDU leader Jörg Geerlings, put out a statement saying that the CDU was all about “Christian values”.

All this is completely absurd, because last year the CDU more or less announced that it was going to try and win over the Muslim vote, which has historically gone mostly to the SPD. The strategy could hardly have been more conscious and obvious. Just before she got elected as the CDU’s first Muslim MP in September, Cemile Giousouf described herself as a “strategic signal” in this Zeit article. To quote the report: “The strategy of getting immigrants into the CDU comes from the top. ‘For a long time we were signalling to immigrants: we don’t really like you,’ says Armin Laschet, CDU chairman in NRW [the very state where Calik is from!], ‘even though a lot of immigrants agree with conservative values.’ “

In May last year, Giousouf herself explained why she joined the CDU to Die Welt am Sonntag: “The CDU gives religion and religious feeling its place. That’s important to me. It is a party that represents a politics of values that is based on the Christian view of humanity. Religion is not a marginal thing for the CDU.”

It’s not like any of this is new either. Bülent Arslan, chairman of the CDU’s German-Turkish forum said in 2010: “The values that the CDU took from Christianity are values that any enlightened Muslim would support. I am convinced that a devout Muslim can more easily identify with the CDU’s positions than with the world-view of the Social Democrats or the Greens, for example.”

I think Calik can get those shopping bags out again and Muslims and Christians should admit they love each other. In fact, the CDU is missing a trick with the eight million Syrian refugees currently milling around the Middle East all wretched and destitute: get them over here, naturalize them, put little crescents inside the Cs and Merkel would never be out of office.