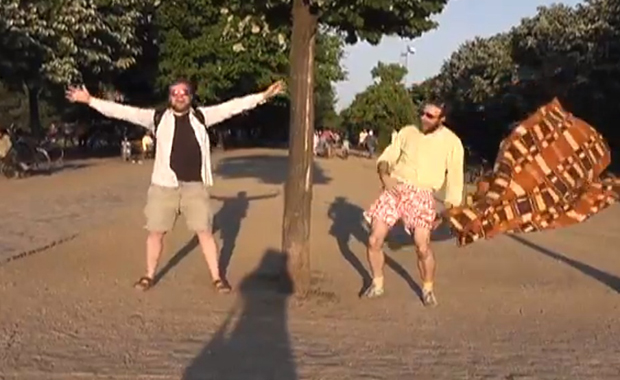 The governments of most countries have one major task – convince people that they have to get up and go to work. As the many “bailouts” in the past few years show, governments are prepared to pay a lot of your tax money to prop up the facade that “work” is not a choice you make to distract you from your own death and/or the pleasures of your body, but is in fact somehow necessary for “the economy” and a “fair society”. Everyone knows secretly that we could actually just get machines to do everything while we sit in the crater in Görlitzer Park eating lovely crispy chicken and writing poetry. That’s why many people refer to “work” as an “ethic”. This is exactly what it is – in other words, an ideology.

But it does take much bureaucratic toil to keep the ethic alive. And sometimes the sweating bureaucrats get weary and their efforts get clumsy and the façade crumbles a little. For instance, this week it emerged that the German government – or more specifically, the part of it that believes most solemnly in work, the FDP – was caught cutting bits out of a Labour Ministry report on inequality in Germany.

The passages that were removed included those that referred to the rising incomes of the rich, the sinking incomes of the poor, the fact that there are four million Germans earning less than €7 an hour, and the line: “Private fortunes in Germany are very unevenly distributed.” Perhaps most significantly, the government removed passages referring to polls that showed that more and more Germans feel that society is becoming more unjust and that working hard won’t make them rich. The reason for the redactions? FDP leader and Economy Minister Philipp Rösler put it as bluntly as one could hope – the Labour Ministry’s report “did not reflect the opinion of the government.”

The average German’s sense of injustice was borne out by a recent Swiss study, which found that imposing benefit cuts on the jobless makes no economic sense. By sanctioning those who refuse the first worst job they find (which more German Jobcenters are doing, the latest stats show) meant that while they will find a job sooner, they end up with a lower paid job than what they had before. In fact, they are often so badly paid that their income has to be topped up by the state. In other words, benefit “sanctions” don’t save the government any money. The work ethic façade is crumbling. Let’s go to the park.