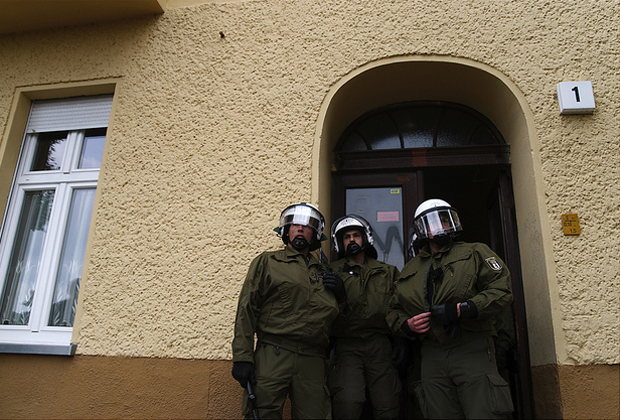 Yesterday, the wise council of Germany’s interior ministers removed one of the last formal hurdles to banning the NPD. They decided to pull the police informants out of that bunch of Nazis (if they can still tell them apart). For there is a good chance that the age-old debate about whether we should ban the NPD will solve itself when they do this. Probably, if all the cops who are secretly NPD members resign, there will be no NPD left. Or no police. I’m totally confused now.

But if it doesn’t pan out that way, and there are some Nazis left who actually don’t have anything to do with the police, the interior ministers’ plan is probably a good idea. That’s because the main reason why the last attempt to ban Germany’s mainstream neo-Nazi party failed was because some of the evidence against the NPD – racist, anti-democratic pamphlets and suchlike – had been written by police informants. In effect, it meant that the police was writing racist, anti-democratic material so that it could ban a racist, anti-democratic organization. That’s a Nicht-Nicht, as far as Germany’s red-caped Jedi council in Karlsruhe – not to be confused with the wise council of interior ministers – is concerned.

But what now? How will the authorities get the evidence to ban the NPD if it hasn’t got informants to write it? What if it turns out that only police informants are any good at writing racist propaganda? And what will they do now they’re unemployed? How will they vent their creative urges? Maybe they could do a funny calendar of light-hearted cartoons about racial stereotypes?

Oh yeah, it seems they already did that, which seems like too much of a coincidence. So now, once they’ve banned the NPD I suppose they’ll have to ban the police.

But then the interior ministers will have to send informants to infiltrate the police to make the necessary evidence to present to the Jedi council. Well, they could use those out-of-work NPD people who are looking for a job who all used to be police informants.

Probably what will happen is that these propaganda-writing-NPD-police-informants will keep shuffling around, like a band of racist nomads, while the interior ministers follow them around, making them draw racist cartoons, and then banning them when they join an organization. Eventually they’ll have to ban them even if they just meet in little circles on the street, until finally they convene in a cold, grey seaside hotel on a winter’s day and die.