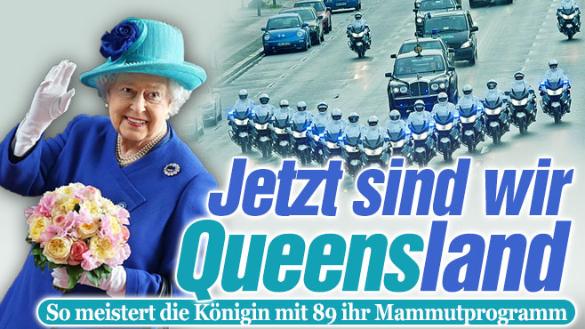 German political commentators are usually pretty rational people. They weigh up arguments, scrupulously recall relevant precedents, put the events of the news day in their proper context, and then make astute, carefully structured points. You may not agree with them, but they are generally thoughtful and fair, and when you finish reading them you can’t help but take off your glasses, put one arm to your mouth ruminatively and say things like, “Yes I see,” and “Well I suppose so.”

Except when there’s an old lady with a shiny hat in town. Then suddenly it’s batshit day. And I don’t just mean the tabloids, who came up with the worst puns in tabloid history. Bild: “Since Tuesday Germany has been infected by WINDSORitis!” (Notice the capital letters so we don’t accidentally think “Windsoritis” is a real word) and “Now we are Queensland” (come on guys, you had ages to think of something, and Queensland is a state in Australia, which is confusing). Our good old B.Z. went with “Yes she Kahn!” (Kahn means boat) next to a picture of the queen in a boat (That doesn’t make any sense either, because she’s not President Obama, and she wasn’t driving the boat, she was just sitting in it).

But it wasn’t just the squawky tabloids. The serious papers went all giddy too. The illustrious Spiegel had two commentators who must’ve taken royal quantities of drugs when they were let loose on their keyboards. Christoph Scheuermann wrote, “Elizabeth II embodies like no other contemporary figure the indestructible, open-minded, self-deprecating Great Britain.” Self-deprecating? She rides around in a golden coach wearing a fucking crown! “There may be a lot of fantastic women on the island who are more exciting: detox queen Kate Moss, for example, Tilda Swinton, Emma Watson, Hilary Mantel, Nigella Lawson and others. But only the queen unifies the disparate sections of the people behind her.”

At a guess, I’d say Scheuermann, apart from being a dangerous lunatic, is politically on the conservative side. So thank God for Jakob Augstein, the Spiegel‘s resident left-wing columnist. He is also editor-in-chief of the weekly liberal highbrow features paper Der Freitag. Here’s a man with both socialist principles and gravitas. Surely he’d be able to maintain a wise, journalistic distance while everyone else got sucked into the monarchical maelstrom. Ha! Fat chance. Jakob decided this was the week he’d unveil his manly admiration for Prince Charles. Prince Fucking Charles! That’s Jakob Augstein’s favourite! He actually wants him to be king! It’s high time, reckons Augstein, that Elizabeth II (the “queen of reserve – and of boredom”) abdicated, so her mad son could take over: “What a relief it was when he finally split up with that eating-disordered Diana!” Jakob gibbered. “What joy that Camilla, the love of his life, clearly his kindred in both interests and looks [waaa…], stayed true to him for so long.” Come on, man, get a grip. Also, you may be having a nervous breakdown.

It was left to the taz, meanwhile, to guard the media’s sanity. They got one of their senior columnists to hammer out 400 words about how the queen was an “incestuous German robber baroness who signs death sentences” and left it at that. Thank god for a voice of reason! Nearly lost faith in you there, Germany. Phew!