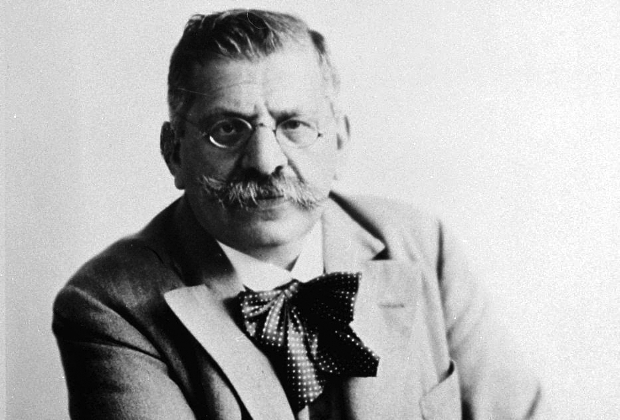 A sexologist who also campaigned tirelessly against Germany’s homophobic laws, Magnus Hirschfeld was unquestionably ahead of his time – but how ahead was he? Researchers who are following in his institute’s footsteps debate his legacy.

May 6, 1933. A brass band is playing outside a beautiful palatial mansion at the edge of the Tiergarten. The windows are open and various objects are being flung onto the street outside: photographs of same-sex couples, X-rays of genitalia, a life-sized model of a human body. Inside, scores of young Nazis are overturning ink wells, tearing pictures from the walls and pulling hundreds of books from the shelves.

A few days later the books will be fed into a bonfire beside the Berlin Staatsoper, along with a bust of the man who owned the building and directed the work that took place there – Magnus Hirschfeld, one of the founders of sexology. The building is his Institut für Sexualwissenschaft – the Institute of Sexual Research. Its story is representative of both the sexual politics of Weimar Berlin and of the vibrant queer culture of the city at that time. It’s also the story of an activist-scientist who seemed to pre-empt many of today’s attitudes toward sexuality, but remains controversial.

Hirschfeld and his Institute

Hirschfeld was born in Kolberg (now Kołobrzeg, Poland) to secular Jewish parents. Foregoing initial literary aspirations, he chose to follow his father into medicine. After spending four years as a general practitioner and obstetrician, he moved to Berlin in 1896 and began to specialise in water therapy.

Although he never made his own homosexuality public, the politics and science of sexuality quickly became central to his work, as did a crusade to abolish Paragraph 175, the German law introduced in 1871 that made gay sex illegal. Soon after moving to Berlin, he published “Sappho and Socrates”, a pamphlet arguing that homosexual love was natural and therefore moral. This was in part inspired by the suicide of one of Hirschfeld’s patients, a young gay man who felt unable to maintain a public pretence of heterosexuality. The next year he formed the Scientific Humanitarian Committee, considered to be the first official gay rights organisation.

In 1904 he published Berlins Drittes Geschlecht – “Berlin’s Third Sex” – part moral fable against homophobia, part gay travel guide mapping the pre-Weimar underground bars, drag balls and key hook-up points that flourished in secret. The current exhibition at Berlin’s Schwules Museum, Rock Hudson and The AIDS Crisis, opens with a political cartoon of Hirschfeld from 1907, banging a bass drum and shouting about Paragraph 175. “We see Hirschfeld as an important part of the journey to decriminalisation,’ explains museum board member Kevin Clarke.

After World War I, German conservatives and nationalists were warning of “sexual crisis’” and “Geschlechterkrieg” (gender war); a “feminising of society” due to women’s increased emancipation in wartime and the two million male casualties. At the same time, a sexual reform movement was encouraging couples to have sex that was both productive and pleasurable, with the aim of producing a higher birth rate in the aftermath of the war. The result, for Berlin in particular, was the beginning of a new sexual world. Despite Paragraph 175’s continued enforcement, the law was effectively relaxed in the German capital. Berlin became an internationally renowned centre of lesbian, gay and transgender culture, reflected in countless publications, bars and social clubs.

It was in this climate that Hirschfeld opened his institute in 1919, the same year Different From the Others, an impassioned pro-homosexual cinematic plea against Paragraph 175 he co-wrote with director Richard Oswald, was released. As the world’s first sex research centre, its very existence was revolutionary. It was at once a research library, a clinic and a safe haven for the sexually unorthodox; it also offered sex counselling and the first marriage guidance clinic in the world. Around 20,000 people visited it each year; around 1800 consultations took place. Hirschfeld provided advice and treatment that encouraged and studied alternative sexuality, rather than attempting to “cure” it; in accordance with his own socialist views, he ensured that poorer patients were treated for free. It’s particularly impressive that this was achieved by a Jewish intellectual and outspoken gay rights activist in a country in which homosexuality was illegal and Europe’s most vehement anti-Semites were becoming a major political force.

In 1929, Hirschfeld and a coalition of influential campaigners very nearly succeeded in changing Paragraph 175, but the economic crisis that year forestalled the debate indefinitely. Four years later, while Hirschfeld was touring the world lecturing and researching, the Nazis attacked the institute. One administrator was sent to a concentration camp; the archives and library were destroyed. As both a Jewish intellectual and a campaigner on gay rights, Hirschfeld could not safely return to Germany. He died in France in 1935, the same year the Nazis redefined gay sex as a felony punishable by five years of imprisonment.

His work died with him. After the War, West Germany upheld the Nazis’ expanded version of Paragraph 175 for nearly 30 years. The institute never re-opened.

It’s difficult to know how to judge work that was so dramatically cut short, says Raimund Wolfert of the Magnus Hirschfeld Gesellschaft. The Berlin archive contains books, documents and other items from the sexologist’s life, including a paperweight Japanese sculpture of a gay couple engaged in mutual masturbation and Hirschfeld’s death mask, recovered by accident when the Vancouver home of Tao Li – his final lover – was cleared out in 1993. “Sex is still a taboo subject for many people, especially sex that is in any way non-conformist. But I think if Hirschfeld’s work had continued, these taboos would not exist,” Wolfert says.

Hirschfeld’s most direct successor is the Society for Social-Scientific Sexual Research (DGSS). Founded in Düsseldorf in 1971, it’s the oldest and largest sexological institute operating in Germany today. Its current president, Jakob Pastötter, points out that some of Hirschfeld’s theories might now be seen as outdated. Via observation and patient questionnaires, the doctor theorised that homosexuals belonged to a “third sex” existing between male and female. “It implied that male homosexuality was a form of effeminacy,” says Pastötter. The theory was highly controversial at the time; the gay rights activist and publisher of groundbreaking gay journal Der Eigene Adolf Brand, who saw homosexuality as an expression of Hellenic manliness, was amongst Hirschfeld’s fiercest critics (although the two worked together in the campaign against Paragraph 175).

In fact, the ‘third sex’ is an oversimplification of Hirschfeld’s findings. Combining direct observations and data-collecting and his research into theories of sex and gender from other cultures, he posited that gender and sexuality had a spectrum of Zwischenstufe or “intermediaries”; that – without exception – all human beings are intersexual variants, composites of different proportions of masculinity and femininity which are as unique as fingerprints. This non-binary idea of gender could be seen as a forerunner to modern queer theory, though it does start with the flawed proposition that some qualities are inherently masculine and others inherently feminine.

There are other aspects of Hirschfeld’s work that are problematic. Andreas Kraß works at the Humboldt University’s Centre for Transdisciplinary Gender Studies (ZTG), which connects professors of science, literature, philosophy, ethnology and history in order to approach gender from all possible angles. “Hirschfeld believed in eugenics,” he says, “which was omnipresent in his time, but is now out of date and not acceptable.” Hirschfeld suggested that selective breeding could be a way to eliminate venereal diseases, though he actively distanced himself from the Nazi conception of racial eugenics.

In the end, the scientist’s longest-lasting legacy may have been his trans-disciplinary approach to sexuality. “He realised that sexuality was not just an issue for medicine,’ says Pastötter, whose society awards a biannual Magnus Hirschfeld Medal for outstanding service to sexual science. “His institute was a much better research space than anything made later, or than anything today, because of this.”

Hirschfeld’s motto was ‘Justice through Science’. But if science serves a political cause, it’s no longer science, it’s PR.

Though Pastötter praises Hirschfeld’s social and cultural studies of sexuality, he does take issue with what some might claim is the doctor’s most praiseworthy work: his unwavering crusade for gay rights. “He gave us a hard time,” sighs Pastötter. “His motto was ‘Justice through Science’. But if science serves a political cause, it’s no longer science, it’s PR.” For Pastötter, Hirschfeld’s legacy is a professional difficulty. “He combined sexual science and politics and said they were the same; this means we now can’t do scientific research without it being assumed that we are advocates or activists.” Pastötter’s own relationship with activism has often been fraught. In 2014, the DGSS found itself at odds with the queer community over recent reforms in German sex education that included an introduction to non-heteronormative sex and relationships. Vice-president Karla Etschenberg created a controversy when she spoke against advertising homosexual “propaganda” to school children. Etschenberg resigned, but Pastötter backed her position, explaining that whereas his organisation supports the acceptance of all orientations, they don’t agree with the “sexualisation of young children”. Journalists at queer.de warned of “a cuckoo egg in the Hirschfeld foundation”, showing their displeasure with the institute acting as Magnus Hirschfeld’s successor. “We’re barely on speaking terms with the LGBT rights movement,” regrets Pastötter.

For others, the combination of science and activism makes Hirschfeld inspiring. Elena Mancini is an American academic who specialises in intersections of culture and gender studies, and the author of the recent biography Magnus Hirschfeld and the Quest for Sexual Freedom. “He rightly saw his project as a broader human rights cause, aligning with feminist groups, the suffragette movement, abortion rights activists,” she explains. “He used his role at the Institute to educate the broader public, providing medical legitimacy to these rights. We are only now beginning to catch up with him.”

Christopher Isherwood himself wrote “Berlin meant boys” in the opening of his “truly” autobiographical Christopher and His Kind. Here are some traces of gay Weimar in today’s Berlin…

Weimar Berlin also had several queer publications, parts of which you can find online. Der Eigene, dating back to 1896, is perhaps the most famous, but Die Freundschaft (gay), Die Freundin (lesbian) also flourished. Otherwise, Mel Gordon’s Voluptuous Panic does an excellent job documenting gay Weimar Berlin – and looks great on your coffee table. So your gay walkabout needn’t even require leaving home.