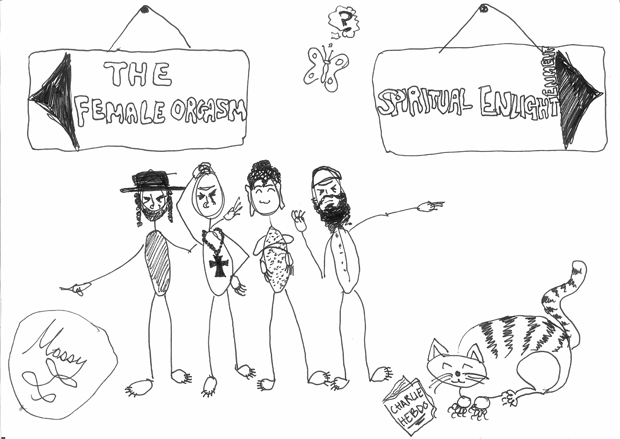 Comics and Jihadists actually have a lot in common: both think they have a divine calling to make the world a better place – that they’re chosen ones to enlighten humanity while everyone else just thinks they’re fucking arseholes. And they both – despite nine times out of 10 being gross – always manage to pull women. Apart from instigating critical dialogues on the nature of free speech, cementing France as a global bastion of secularism and western democratic thought, one positive thing that has come out of the Charlie Hebdo massacre is that suddenly there are about two billion more people eligiable to fuck in the world. Like now any guy could saddle up to me in bar now and grunt “Me, Tarzan. You, Jane. Charlie Hebdo!”

“What’s that? You know the name of an anti-establishment leftist French satirical magazine?! Okay let’s go.” I have gone home with guys for less.

If there’s one thing that religions have been at war with longer than each other, it’s sexy times, and if there’s one thing that ruffles pious feathers more than sexy times, it’s women enjoying those sexy times. From horrors that range from female genital mutilation to being sexiled during the menses; spirituality and feminine appetites have had a far from a congenial relationship. But how do these patriarchal merchants of morality (i.e. dicks with tricks) really fare? Let’s now take a closer look at the religions white people like to think they know everything about.

To put it in a saggy, baggy nutshell, Christians screwed sex for Western civilisation, especially for women who from the get-go were aligned with the lowliest of creatures, the serpent, and were was cited as the origin of sin, and it hasn’t got much better since. No biggie or anything, but basically before Christ got on the soapbox, life in ancient times was chock-full of unbridled libidinous delight without the unequivocal demonisation of female desire. Aphrodite, Cleopatra, Empress Messolina – feminine lust was not only invited to the table, it could even be the centre piece. Fast forward through about 2000 years of dreary procreational Christian sex to a still incredibly oppressive reign over the female body. Not made better by the fact that maybe while Jesus Christ could’ve rocked a mean man bun, we all know he’d be rubbish in the sack.

Bad boy appeal right now. Maybe I’m a jealous psycho bitch (have a guess) but knowing that my husband was counting down the days to his death until he got to heaven and his complimentary 70 virgins to bang would get on my nerves, even if you have to be a martyr to take advantage of that special offer. One of the many things that Princess Diana and me have in common is that we’ve both had saucy flings with Muslim men that have ended in disaster. But clearly it’s not all burqas and beatings, though. The story goes that the Prophet Muhammad would be available for chats in the mosque after prayer, lending an open ear to women whose husbands were failing to please them in the sack; the Prophet would step up and have a harsh word with the husband, even if the reason that he was AWOL on his randy wife was because he was consumed in prayer. On top of that, thirteenth-century Persian poet Rumi would have licked clit like nothing else AND in the last decade, vaginal secretions have been deemed halal. Thank Allah for that!

Jewish men have always had an enormous amount of sex appeal: neurotic intellectuals, musicians, artists, misanthropes. While the stereotype of Jews having big noses is totally fatuous, let it be known there is absolutely nothing disadvantageous about sizeable schnozzles when it comes to sexy times, especially when it comes to the delicate art of sitting on a man’s face. Hasidic Jews – incorrectly famed for apparently having sex through holes in bed sheets (which could actually be kinda hot) – allow women to divorce their husbands for failing to sexually satisfy them. If orthodox Jews are your thang, then a sure fire way to attract one: book yourself in at the beauty salon for a bikini wax and ask the woman to give you a Gaza strip, that’ll guarantee that the Zionist lads won’t be able to keep their hands off you.

My mother told me to never go out with a man who treats animals badly because that’s how he’ll treat me. Cheery right? On that note, Buddhist monks would make primo boyfriends apart from the fact that they’re sworn celibate and have strictly forbidden themselves from lowly earthly desires i.e. mining pussy for deeply buried treasures. Sure the Dalai Lama is a totally chill guy, but no amount of Zen is going to get this guy to rake your lady garden. Besides you can really tell that you’re signing yourself up for a life sans libidinal lust when Buddhism preaches that sexual pleasure is the cause of all suffering, and fuck them for being so right on the money.  Nirvana has a silver lining though: the 14th Dalai Lama wrote that “Being able to have sexual contact without releasing semen is something needed when you practice the advanced stages of the complete stage.” So men with ejaculation problems (i.e. alcoholics and those on psychiatric medication – my types) are actually of the higher order – sorry, getting to the “advanced stages of the complete stage”… think you can also achieve this at CrossFit?

In conclusion, Mossy implores followers of all faiths to be conscious of, if not interrogate, the demeaning confines to which female sexuality has been relegated to by religion. But being the equal opportunist that she is, rest assured that – regardless of denomination – all can travel the divine path to her G-spot, which might veer to the left at some point but is still easier to find than enlightenment.

REMEMBER: Unless you want to end up as a character in The Human Centipede, do not start getting friendly with the mitfahrgelegenheit driver.